Smoke jumpers parachute in to fight forest fires. Miners work hundreds, sometimes thousands, of feet below ground under dangerous conditions. Disaster relief workers and first responders face the threat of explosions, radiation, or building collapse. They bravely assure us it’s all in a day’s work. But scientists and sci-fi writers alike have often asked “Can we use robots instead?”

We see the answers to that in a limited number of dangerous or dull jobs today. Think of robots that defuse bombs or clean floors, for example. But, most of the time, the answer to “Why can’t a robot do it?” is “Because it’s too slow and clumsy.” AI, sensors, and computing power improve every day, and we’ll continue to expand the type and number of jobs that autonomous systems can tackle.

But Grainger Engineering’s João Ramos and Kris Hauser have another approach in mind. With support from the National Science Foundation, they’re building a wheeled, humanoid robot that people will control from a distance. The robot is called SATYRR (Semi-Anthropomorphic Teleoperated dYnamic Rolling Robot), and operators will use full-body haptics to communicate input and receive multisensory feedback.

“We are studying how full-body haptic feedback lets operators feel the weight and impact of their movements, making the experience more immersive,” said Hauser, a professor in the Department of Computer Science.

Strapped into a suit that tracks and translates their motion and posture, the operator will be able to control the robot using natural gestures. The suit will also provide the haptic feedback that Hauser describes. Along with predictive control algorithms to prevent the operator from giving commands that would damage or disable the robot, that combination of features will create a much more agile and functional robot.

“The idea is that if there’s a disaster, you send the robot in, and it can be controlled by an operator from a safe position,” said Ramos, a professor in the Department of Mechanical Science & Engineering.

To prove the robot’s mettle, the team plans to set up a “realistic laboratory task environment.” In other words, they’re going to build an obstacle course that mimics actions that are crucial to first responders and others who work dangerous professions.

When carrying a very complex payload like a human body, the behavior of the object is unpredictable. This complex manipulation of tasks can throw a robot off. balance just like it might a human. The robot has to gently adapt to the dynamics of the shifting payload, receiving data and making minute adjustments constantly. 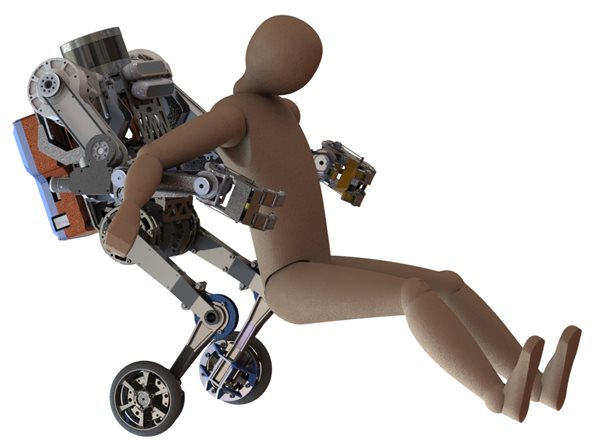 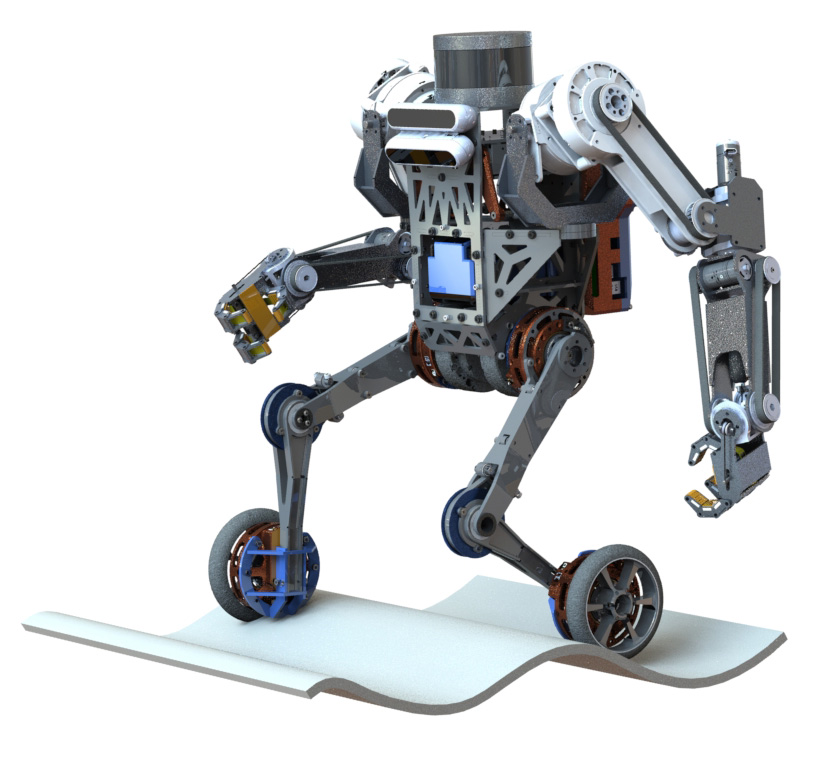 In a lab, the ground is typically flat – easy to glide across on wheels. But a robot that would fight a fire or work in a mine isn’t going to have that luxury. It’s going to be moving in an environment that is both irregular and constantly changing.

The SAYTRR has an active wheel on each of its two feet. These are driven by proprioceptive motors that both drive the robot and provide data about the forces that the wheels are experiencing as they move. This information is required for the dynamic motion mapping algorithms the team is developing, and they’re crucial to stabilizing the robot as it moves.

In action, the SATYRR robot will have to maintain balance while following human motion as closely as possible. For that, the robot has a semi-autonomous balancing controller. It can correct the motion to maintain balance even if the operator sends a command that would make the robot fall. Image two people dancing. One leads, one follows, but each maintains its own balance. 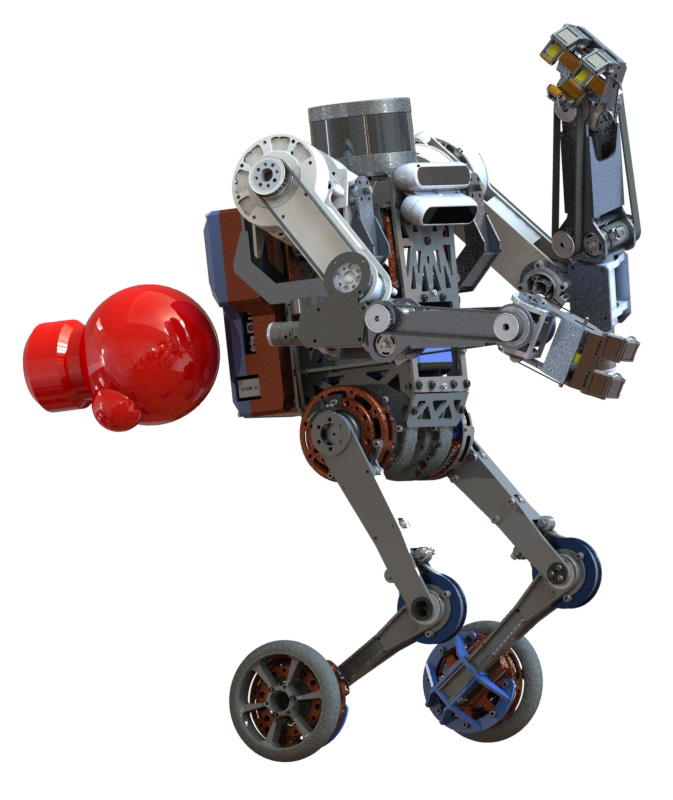 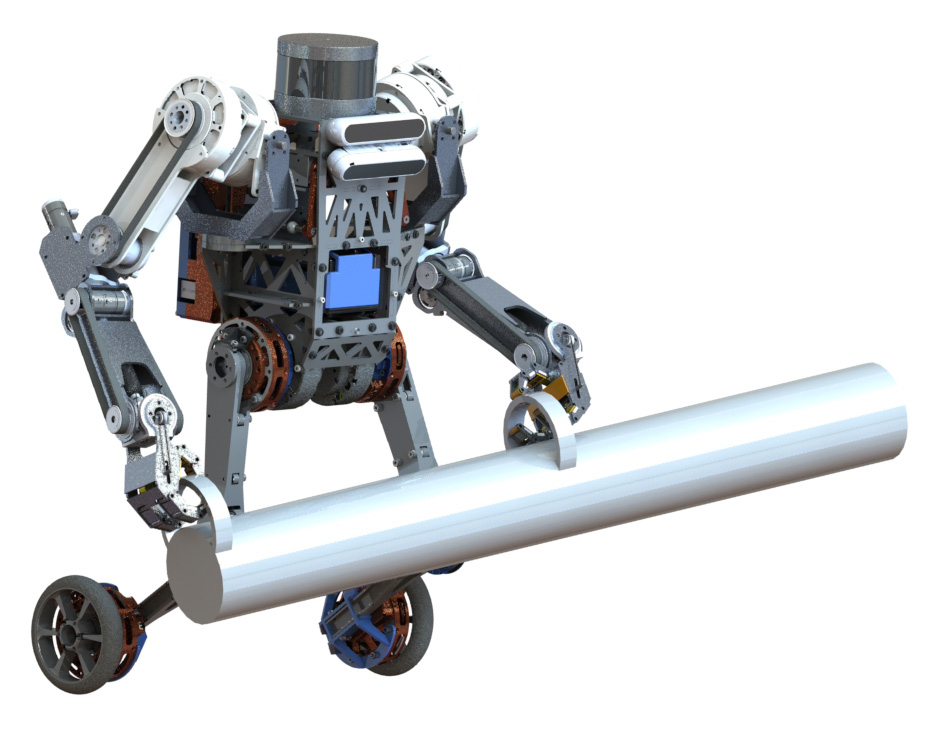 4. Break Down a Door

Millions of years of evolution have given us the motor control and reflexes to coordinate our whole body and throw our weight around. It’s intuitive for us, but not for a robot. The SATYRR robot will not only have to replicate the complicated mix of balance, strength, and coordination necessary to break down a door. It will also have to reject commands from its human operator that are excessive and exceed its operational limits.

This interrelationship is known as “shared autonomy.” The robot is controlled by a human but has automated safeguards that keep human commands in check. Current techniques for generating these decisions in real-time are too slow for complex tasks like breaking down a door, so the Grainger Engineering team is creating new predictive control models to support this level of shared autonomy.

This tasks requires very fast motions and sudden changes in the dynamics of the robot-payload system. The SATYRR must perceive the weight of the object and coordinate its entire body to quickly accelerate the object, controlling its own movement while simultaneously manipulating the payload. 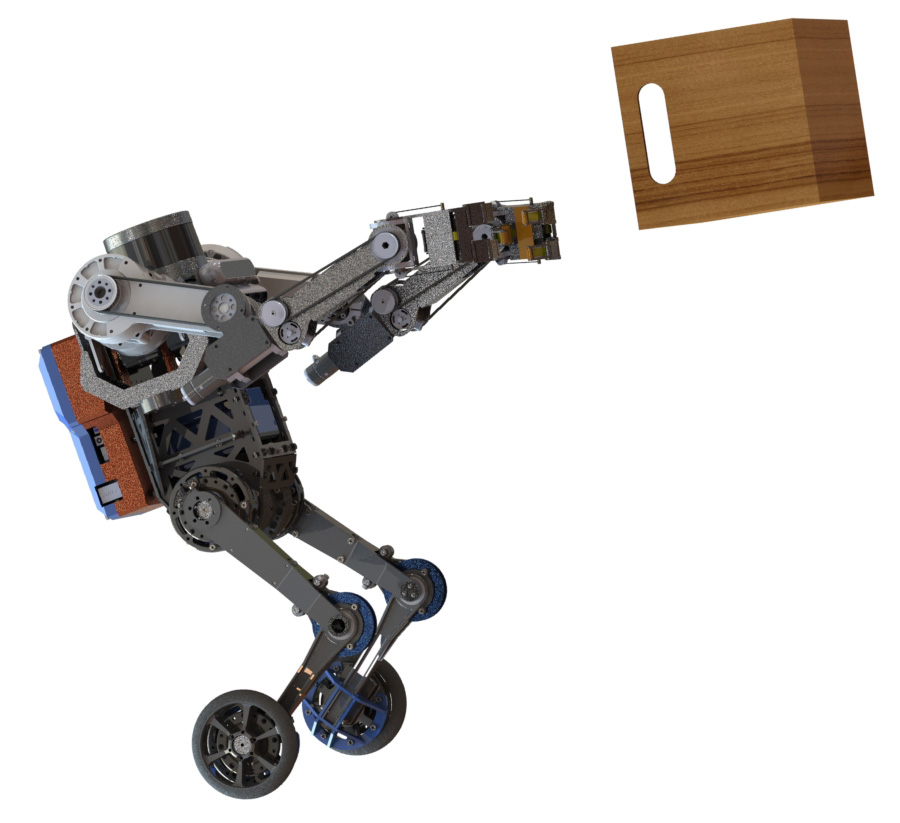 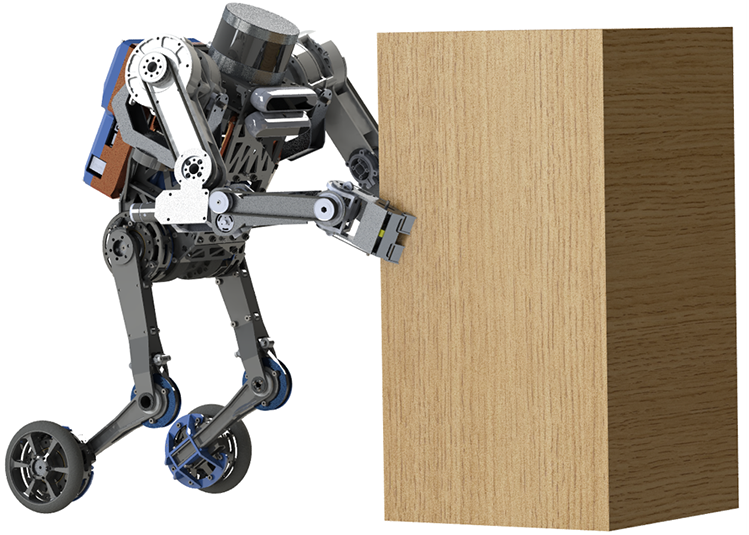 Standing on two legs instead of four gives humans a high center of mass. That gives us the ability to amplify the forces we can apply to objects by leaning against them – think about the way you put your shoulder against a heavy door to open it. A robot can perform a similar motion to move debris or rubble. With the SATYRR, the human operator will have to intuitively perceive the right amount of force. Not enough, and the object doesn’t move. Too much, and the robot takes a tumble.

Back to Limitless Magazine Spring 2021