Strong ties endure between Grainger Engineering and ROTC at Illinois

Amid technological advances in both engineering and the U.S. Military, a new generation of young leaders at Illinois combines these programs to meet evolving demands in the Digital Age

The enduring relationship between The Grainger College of Engineering and ROTC programs continues as 55 engineering students, training as undergraduate cadets (Army and Air Force) and midshipmen (Navy), recently finished the school year at the University of Illinois at Urbana-Champaign.

Molly Hein and Ryan Nixon, both ROTC cadets, represent this crop of students and explain, with Lt. Daniel Meaney, USN, a graduate student and assistant professor of naval science,  how their combined interest in science and the military led them to two prestigious programs at Illinois.  Joe Rank (’69 Media, MS ’73 Media), a retired U.S. Navy commander who once taught Navy ROTC midshipmen at Illinois, shares the two programs’ established history and why those ties are relevant today. 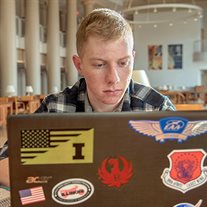 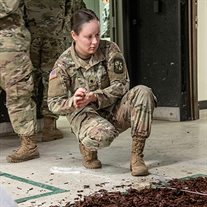 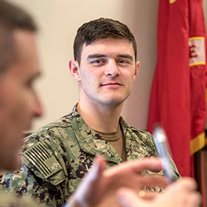 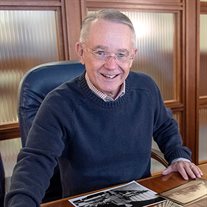 As a kid growing up in the western Illinois town of Knoxville, Ryan Nixon (Mechanical Science and Engineering, '22) recalls watching WWII-era Stearman planes take to the skies during the National Stearman Fly-In in nearby Galesburg.

“Since I was fairly young, I’ve been interested in airplanes; how their jet engines work and how you can get these heavy things to soar through the sky,” Nixon said, who is an Air Force ROTC cadet and freshman enrolled in mechanical science and engineering.

As Ryan grew, so did his passion for airplanes and the science behind their innerworkings. A second passion emerged when he attended an engineering orientation class his freshman year in high school. He loved his math and science classes and was able to use those lessons when the school received a 3D printer.

“I knew that designing things and building them was something I was really into,” Nixon said.

“They were a big influence,” Nixon said. “They were really good mentors and role models to me. They really loved the school (Illinois), and I knew it was a good choice.”

Combining his two passions, in a town Nixon describes as revering the military, was important to him.

“I have always wanted to serve my country, but I also knew I wanted to go to college.” Nixon said. “AFROTC is the perfect balance between the two.”

Nixon received a Type 7 High School Scholarship AFROTC, which pays full tuition, and is finishing his first year at Illinois. He sees a connection between skills learned in both Engineering and ROTC.

“The Air Force has thousands of planes; they need people to maintain them, operate them, and design solutions,” Nixon said. “Problems arise on that scale, and they need experts to fix them.”

“You can’t sit back and let others get the job done,” Nixon said. “You have to take charge or speak up if something isn’t right.”

Nixon hopes to receive his pilot’s license in the next year or two. Last summer he accumulated 15 flight hours.

The freshman sees the relationship between engineering and the military as relevant for today.

“With complex machines, like aircraft, comes the need for trained individuals who can operate and maintain them,” Nixon said. “The Air Force needs engineers just like any other company.”

Time management is a top priority for Molly Hein (Materials Science and Engineering, '20). The Army ROTC cadet and junior, enrolled in materials science and engineering, is also a member of the swimming & diving team. Most days begin at 5:30 a.m. for swimming or ROTC physical training. The rest of the day is mainly devoted to school work.

“I’ve been balancing swimming and school my whole life,” Hein said. “I was never worried if I was going to be able to do it.”

The Wisconsin-born Hein began swimming competitively around the age of five along with older sister, Stephanie Hein (BS ’16, Molecular and Cellular Biology), who is also the first CEO of the nonprofit organization, MakerGirl.

While attending Illinois and competing on the swim team, the older Hein was instrumental in putting Illinois on her younger sister’s radar, especially when a UI military science professor introduced ROTC as an option to athletes during a talk with them.

“She knew that I had wanted to look into the military; so when she told me, I knew I had to come to U of I, “ Hein said, upon finding out she could pursue both interests. Her growing awareness of engineering college rankings helped solidify her choice to attend Illinois.

“ I always knew that Illinois had a strong reputation for engineering,” Hein said. “I would go online and look up rankings of different programs to try to help me decide what I wanted to do. I noticed all them were in the top 10 at Illinois.”

Though Hein did not get accepted to her first major of choice - bioengineering, she has no regrets about where she landed.

When she took a class her sophomore year, taught by Cecilia Leal, assistant professor of materials science and engineering (MatSE) and a 2018 Grainger College of Engineering Dean’s Award for Excellence in Research, she knew she was in the right place.

Hein was impressed with Leal’s teaching style and looked forward to taking more classes taught by her. She got her wish and took Leal’s biomolecular materials science lecture this spring semester. She also worked with polymer samples in Materials Laboratory II Polymer Crystallization lab, taught by Jennifer TerBush, a lecturer with MatSE.

Hein’s MatSE classes help shape one of her goals for post-college life with an eye on military service.

“I am very interested in designing prosthetics and hopefully, one day, can tie that into working with veterans,” Hein said. “I think having this experience with MatSE, with biomaterials, is a unique way to tie both things I’m passionate about together.”

For now, Hein is considering what Army branch she hopes to be appointed before next year’s commissioning. Combat engineering and aviation top the list. Whether she serves 20 years or more in the military or pursues a career in prosthetics, Hein is committed to using all of her skills from Illinois.

Lt. Daniel Meaney works to complete his technical degree as he climbs the ranks of a Naval career

As Lt. Daniel Meaney (assistant professor of naval science and graduate student in mechanical science and engineering) neared completion of a tour at sea aboard a ballistic missile submarine in 2018, he received a message that he would be rotated to a land-based assignment of his first choice: to report to the University of Illinois as a Navy ROTC instructor.

Meaney, who received his bachelor’s degree in mechanical engineering from the U.S. Naval Academy in Annapolis, Maryland in 2014, said he was excited upon receiving the news.

“My experience in the Navy allowed me to come to Illinois to complete my master’s degree in mechanical engineering, which is what I’d wanted to do since high school,” Meaney said. “I recognized the prestige of the program; the experience of the faculty here.”

Meaney brought plenty of engineering knowledge and military training when he set foot on Illinois campus as an assistant professor of naval science to teach naval engineering and advise students in the fall of 2018.

Since joining the U.S. Navy, Meaney has worked in two engineering-related positions as a submarine officer: a main propulsion assistant and chemical and radiological assistant.

“These two jobs are designed to assist the main engineers’ responsibility of operating a nuclear reactor at sea,” Meaney said.

Meaney taught a naval weapons systems class during spring semester, which was open to any Illinois student. Those students are usually upperclassmen when they take it.

For Meaney, an advanced degree in mechanical engineering means taking his experience to the next level.

“I dream that this degree will allow me to bring both my experience in the Navy of technical management and engineering leadership to form a diverse background of knowledge,” Meaney said. “I would like to bring this knowledge to teams, whether that’s tracking other submarines or solving diplomatic challenges within the Navy or within the technical industry.”

For engineering students considering a role in the ROTC program, Meaney said a propensity to serve one’s country is first and foremost. A curiosity about how systems operate and how history is used to develop future solutions is also important.

Like Army and Air Force cadets, Navy midshipmen don’t have to commit to military service until their third year. If the path is the right one, Meaney believes students have numerous opportunities and advantages because of an engineering degree.

“The Navy offers the ability for an engineer to be on the front lines of science, the front lines of engineering; in order to change the scope of today’s warfare capabilities, to provide the United States with the greatest amount of protection for its citizens.”

CDR Joe Rank, USN, Ret. explains why “the need for highly qualified engineers and scientists in the military is greater than ever.”

Joe Rank (retired U.S. Navy commander, former assistant professor of naval science, and retired vice president of the University of Illinois Alumni Alliance), a self-described townie of Urbana, has a close connection to the Navy ROTC program. When he began his college career at Illinois in 1965, he also enrolled in NROTC. In 1969, he was commissioned an ensign and, soon after, served on a couple of destroyers during the Vietnam War. When he was offered an opportunity to return to Illinois to teach Naval ROTC following his three-year commitment, he gladly accepted.

“I had a great two-year experience teaching ROTC and was able to get a master’s degree while I was doing that,” Rank said. “I’m very proud of that group of students I had during the early ‘70s.”

Rank recalled how times have changed since serving in the Navy 50 years ago, back when he was charting courses on paper charts with pencils, protractors, and dividers.

Since retiring as a commander of the U.S. Navy in 1989, Rank has remained involved with the university, overseeing UI history and traditions projects, giving lectures, contributing to Illinois Alumni magazine, and sharing his wealth of knowledge related to the university’s relationship with the military.

“What became the College of Engineering and the Department of Military Science essentially grew up together,” Rank said.

When the Illinois Industrial University opened its doors in 1868, there was no template for a Land Grant university curriculum, Rank explained. John Milton Gregory, the school’s first regent (president) modeled the military science and engineering curriculum after West Point, then the nation’s leading engineering school. The close partnership between these disciplines was evident when the Mechanic and Military Hall was constructed in 1871 and continues today.

Those ties were strengthened during two world wars; notably, during World War I when the National Defense Act of 1916 established the Reserve Officers’ Training Corps, or ROTC.

“If the First World War impacted the University, World War II changed it forever,” Rank said, referring to the nearly 27,000 soldiers and sailors who trained on campus during the war years and the remarkable contributions of faculty. “Synthetic rubber, anti-malarial drugs, munitions, Doppler radar, and our preeminence in computer science were all a direct result of defense research conducted during the war,” he said.

“We need information technology folks; we need artificial intelligence folks, we need space systems folks,” Rank said. “The battlefield of the future is going to be in space; it’s going to be in cyber space. We need physically and technically-educated officers in the Armed Forces more than ever.”