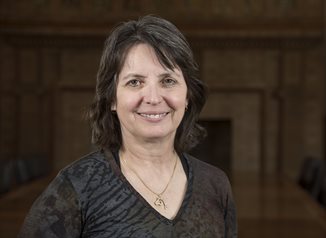 “I fully believe in giving back. I would not be where I am today without my degree from Illinois.”

Carolyn Eberhard has spent the majority of her career working in the environmental sector and her passion lies in renewable energy and sustainability. She worked as a project manager for Parsons Engineering Science for 12 years as well as an independent environmental services professional.

Carolyn is devoted to student scholarship support and is a former scholarship recipient. During her senior year in college, she faced being unable to afford her tuition – despite working multiple jobs over the summer and working as an engineer at the Construction Engineering Research Lab. She reached out to the Civil Engineering Department for help and after meeting with the dean, she learned of a scholarship opportunity which she was later awarded. This funding allowed her to finish her degree. She has proudly donated to Illinois nearly every year since graduation. Carolyn and her husband, Martin, support several scholarships for students in the college, including the Engineering Visionary Scholarship Initiative.

Carolyn is a native to central Illinois and she grew up in the small town of Melvin. She earned her bachelor’s degree in civil engineering from the University of Illinois in 1983 and received her master’s degree in technology management from Pepperdine Graziadio School of Business and Management in 1992.