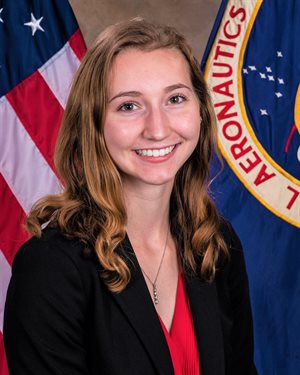 My name is Harriet Hunt, and I am a senior in Aerospace Engineering at the University of Illinois (UIUC). Over the past four years I have been involved with research, internships, TA’ing, and RSO’s in the Grainger College of Engineering.

Before I started freshman year, I came to UIUC for my engineering orientation, and I heard about an RSO on campus called “Illinois Space Society” or ISS. After learning about the educational outreach, professional development, and technical projects, I decided to join ISS and immediately I became very involved. That year I became a part of the executive board as the Engineering Council Representative as well as a sub-team lead for a NASA project called Micro-g NExT.

The NASA Micro-g NExT project is hosted by NASA’s Johnson Space Center and challenges undergraduates to design, build, and test a tool intended for use by astronauts. This technical project allowed me to learn hands-on engineering skills, technical writing, and communication as well as allowing me to meet real astronauts and learn from their experiences. Now as a senior, I am the project manager for this year’s team from UIUC and we are designing a bag dispenser for astronaut use on the Lunar surface. The bag dispenser allows for astronauts to grab bags with one hand. The bags will open automatically using stainless steel inserts and then can be closed, again with one hand, to contain rock samples from the surface of the moon.

Along with technical projects, ISS also allows students the opportunity to develop their professional skills through conferences and events. In 2018 I attended the Von Braun Symposium with ISS in Huntsville, Alabama. The symposium is an annual event hosted by the University of Alabama Huntsville where industry professionals and students come together to discuss ongoing aerospace research and projects. There I was able to attend talks discussing aerospace concepts I had never even heard of before and I was able to speak with folks in the industry who shared their knowledge with me. One woman I met spoke with me about the importance of mentorship for women in engineering. She and I became acquainted and ultimately she helped prepare me for my first job interview for an internship with NASA’s Marshall Space Flight Center. Even though I was a freshman, I was able to talk about the hands-on experience I had gained through ISS and I ended up landing the job. The following summer, as a NASA intern, I used the knowledge I had gained through my RSO daily.

As my undergraduate studies progressed, I continued my involvement with ISS as the Membership Enrichment Director, and a volunteer at many educational outreach events such as elementary classroom visits, Engineering Open House, and Illinois Space Day. I could not and would not have been successful in my past three internships or research without the support I gained from my friends within the club. Even though ISS is the largest aerospace RSO, it truly feels like a close-knit family. Not only have I gained talking points for interviews and substantial engineering skills, I have also gained my best friends who encourage me endlessly.

Unquestionably, the family-like culture of the RSO Illinois Space Society and the connections and skills I have gained through the Aerospace Department has allowed me to grow into a strong engineer and granted me lifelong connections and friends. Additionally, the engineering knowledge I have gained through Illinois Space Society has benefited me in the classroom. I have gotten to know professors like Dr. Lembeck and Dr. Putnam through my time in the club and that has opened the door to undergraduate research for me. Thank you Illinois Space Society and the AE department for the support and guidance I needed to make it so far.

Engineering 100 gives the 411 on college life

How I embraced the CEE legacy of innovation and leadership

How a summer research experience changed my life

Making a sustainable difference from day one