Physics for the masses, one song at a time 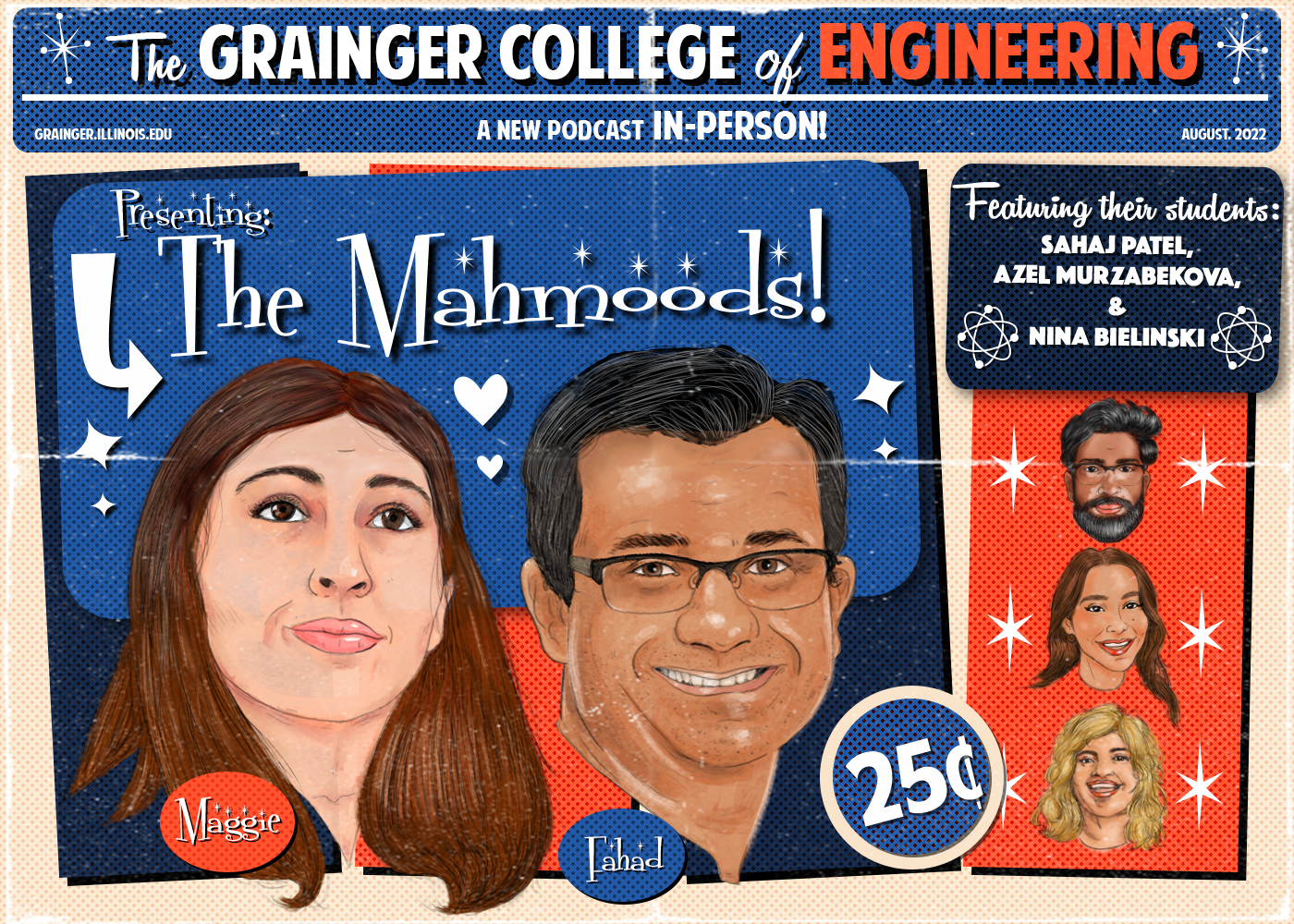 Physics for the masses, one song at a time

A shared love of physics, music and education outreach has been sparking a creative partnership between Maggie and Fahad Mahmood for the last 14 years. The couple is continuing their musical journey in the Physics Department at The Grainger College of Engineering by writing song parodies, which celebrate and teach all things physics. 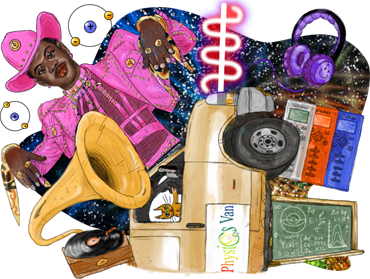 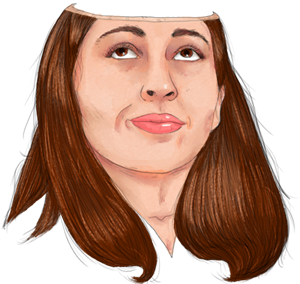 Maggie, a secondary education partnership coordinator for Illinois Physics and Secondary Schools Partnership Program (IPaSS) has been making physics accessible to students by creating music parodies and their accompanying YouTube videos since 2011. Her most recent video, Condensed Matter Girl, a parody of Madonna’s Material Girl, debuted this past May. 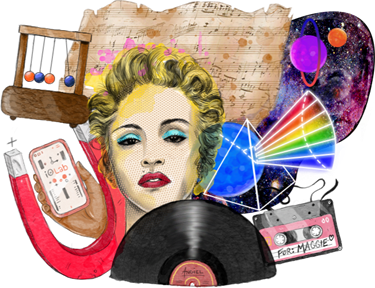 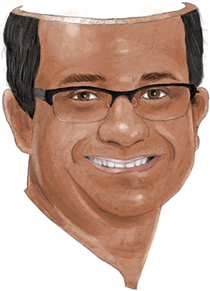 Maggie, a secondary education partnership coordinator for Illinois Physics and Secondary Schools Partnership Program (IPaSS) has been making physics accessible to students by creating music parodies and their accompanying YouTube videos since 2011. Her more recent video, Condensed Matter Girl, a parody of Madonna’s Material Girl, debuted this past May.

Fahad, a condensed matter physics professor who heads the Fahad Mahmood Research Group,  is also faculty coordinator for the Illinois Physics Van. Though his video participation is more recent, his inclusion continues with the couple’s latest music parody featuring students with the Physics Van.

Together, the Mahmoods sit down with Daniel Inafuku, a Ph.D. candidate in the Physics Department, to discuss the joy of making song parodies, the importance of representation in STEM and how they hope to make physics less intimidating in the classroom with some help from Grainger Engineering faculty, students and even their daughter, Asha.

Engineering Is · Physics for the masses, one song at a time · Read the Transcript

Excerpts from the podcast

Daniel:  I'd like to start off by saying how much I enjoyed watching Condensed Matter Girl! And by the way, I worked with your co-writer, Smitha Vishveshwara, on a science-art piece, and she has this amazing ability to fuse art and science; and to reveal their mutual connections. What was it like working with Smitha and bringing everyone together to film all of this?

Maggie:  We had a blast putting it together. When we came up with this idea to create Condensed Matter Girl, we sent a smattering of emails to a number of condensed matter faculty. Smitha was very interested in collaborating not only on participating in being in the video, but also in potentially writing some verses.

Daniel:  Let me take both of you to Fall 2019, before the Covid-19 pandemic, when you both joined the Physics Department. The world went through a major change in early 2020, and you both had to adapt to different teaching practices by moving lessons online. Maggie, during this time, you created the Covid-19 parody of Smash Mouth’s All Star, and you changed it—the title at least—to Quarantine All Star. Could you tell me a bit about that experience?

Maggie:  During that time everybody was really scared and panicked about what was going to happen with this pandemic. This is where I turned to one of my hobbies. We were stuck at home. We were worried. But we had music. And I knew that I had the capability to create a video that might be able to speak to some of the feelings that everybody was having at the time. And the timing was right, because it was the wrap up to the semester for my learning assistant pedagogy course section. I wanted to do something special for them as I had done in past years for my high school students. And this was the end of my first academic year as an instructor in the physics department. I thought hard about what I wanted to do. And it was really a message to the students that it was all going to be okay, and we're all in this together.

Daniel:  Fahad, it was around this time that you made your debut in one of Maggie’s music videos. I thought the lyrics for your video Research in the MRL, which is a parody of Miley Cyrus's Party in the USA, were so inventive and fun. What was it like to finally make a music video together?

Fahad:  I think in terms of integrating the science, the whole idea for this came about because we were very isolated at home. It was a busy time, and I'd always envision that by the end of my first year, I was going to throw a lab-warming party for the Materials Research Lab and the physics department here; just as a way of thanking them, the research staff and the staff scientists, who’d been spectacular by helping me going into the first year.

But then COVID happened, right? So, then you’re like, “Oh, we can’t have a lab-warming party.” I was talking to Maggie, and said, “What can we do for MRL and also have my students involved in a group activity?” And Maggie, as brilliant as she is, was like, “Let's make a music video together!”

It was a great process. My graduate students, who had also been in quarantine, were sort of struggling and getting started on their physics Ph.Ds. They worked with Maggie to tell their stories, of what they wanted to say with issues like inclusion in science and diversity.

“Representation matters so much in STEM, and this is something that I think is important not just to the students in those videos, but to other students who may watch them.”

Daniel: I hear your current joint project is a parody involving the Physics Van. Can you tell me how you got involved with this group and your future plans with it?

Middle school is the demographic that you want to target if you want to bring in more diverse communities into physics because that is where you see students diverge out into other interests; or they just don't see themselves as going into physics, science or STEM careers. I wrote up a proposal as part of my NSF CAREER proposal that we're creating these new demos for middle school students and incorporating some modern concepts in them, like, for example, quantum science. And so that CAREER proposal went through. Together with Sahaj, I'm working on creating these new demos.

Then we also realized that it would be great to do more advertisement and publicity for Physics Van. And that's where the idea of doing another music video came about. One of the things we're doing is incorporating a lot of the funny anecdotes from past Physics Van coordinators.

Daniel: Watching your collection of videos from over the years, it's clear that everyone's having a really awesome time. But there's also another aspect to all of this. And that's making physics accessible to your students. Can you describe the educational value and the connections you're making with secondary and college students with these parodies?

Maggie:  I always think about my first experience with physics, which was asking my parents about it when I was young. They're not physicists, or engineers or really involved in STEM at all. But they told me about challenging experiences that they had when they were first introduced to physics, and that's a scary thing to hear as a child. And it's not just them. This is a common story of intimidation and fear that a lot of young children hear about physics when they're first confronted with the idea of learning it. One of our big goals is to break that stereotype, shift the way that children, young adults and folks in the undergraduate and graduate community think about learning physics.

Putting physics in an accessible medium, like music, engaging individuals that wouldn't otherwise have an opportunity or interest to engage with it at all; that is something that we are motivated by. My family, for example, are very compelled by these videos. They tell us that they do learn something significant about it and are motivated to understand it. If it works for them, and they're very concretized in their non-STEM identities, we think that this is a medium for maybe greater development for middle school and high school students.

Fahad: There are different ways of communicating physics. I think one of the things that students struggle with is like, “Oh, I'm having a hard time understanding it.” They are understanding it. It's just that maybe their understanding of it doesn't match well with the understanding of their professors or their teachers. Whatever story you want to tell by understanding a particular experiment may not be the same as the other person; you probably are going to arrive at the same conclusions, but it's okay if you describe it in your own way.

Maggie: Getting back to the crux of our philosophy for Condensed Matter Girl as well, representation matters so much in STEM. Students and non-physics students being able to see themselves in the videos is very important. And if you go back to some of my earliest works, you will see students primarily from underrepresented groups in STEM participating in a leadership role in these videos. And this is something that I think is important not just to the students in those videos, but to other students that may watch them.