Physics Professor Joaquin Vieira describes the contributions the University of Illinois has made to understanding the beginnings of the universe – and the long-term technical contributions to the massive telescope behind those discoveries.

Located at the South Pole, there’s a research station. It sits 9,300 feet above sea level. Not even half the height of Everest, but towering above Denver or Machu Picchu. In the winter, it averages -65 degrees Fahrenheit. You can mail your care packages directly using a U.S. postal address. But supply planes typically stop making the trip in February and don’t start again until October.

In 2005, that’s where a team of research institutions backed by the National Science Foundation and the Office of Polar Programs – including the University of Illinois Urbana-Champaign – started building a telescope.

There. The Amundsen-Scott South Pole Station. 90 degrees south latitude. On the top of a high plateau and the bottom of any sensible person’s thermometer.

A reporter for the Chicago Tribune at the time ventured down to watch the South Pole Telescope go up. He marveled at its seven-story height, its main mirror that is 32 feet across, and the 25 flights it took to bring in 260 tons of telescope parts.

He also met a University of Chicago graduate student named Joaquin Vieira. They talked about the carbon-fiber backing that keeps the mirror from buckling  in the intense wind. And, of course, they talked about the weather.  “It gets really, really cold, because you aren’t moving much,” Vieira said. “There’s steel behind you, steel in front of you and you’re holding steel tools.”

Vieira would go on to write the first thesis based on data collected by the South Pole Telescope. Fifteen years later, he is now a physics professor in The Grainger College of Engineering. The South Pole Telescope (or SPT, as it’s called) continues to be central  to his work. He and his research team are currently studying data from the telescope’s third-generation cameras and are designing the fourth-generation cameras to be installed later  this decade.

“That thesis result and all the follow-up is basically what got  me a job,” Vieira said recently. “We’re still studying these  galaxies and doing cosmology  of the young universe with that data and telescope. We’re still getting traction out of this a decade later.”

In the first moment after the  Big Bang, space expanded faster than the speed of light. No one understands why. It all took place in the first 10-36 of a second of the universe – a universe that is now almost 14 billion years old. Then the rapid expansion ended, for reasons we also don’t understand. All the matter in the universe continued to coast. Eventually, the universe cooled enough for protons to find electrons and make hydrogen.

After that recombination of protons and electrons, but before stars or even other elements began to form, the universe was filled with neutral and pristine hydrogen. When viewing the millimeter spectrum with instruments  like the South Pole Telescope, cosmologists can inspect the radiation that resulted from  that recombination.

“That is what we call the cosmic microwave background…We can’t see past it. It’s like looking at the surface of a cloud. The universe is opaque because it was ionized,” Vieira said. “It’s not noise. It’s relic radiation left over from the Big Bang. Observations of the cosmic microwave background are the cornerstone of our understanding of cosmology and the universe.  It continues to give us rich insights into how the universe began, how  it evolved and what it’s made of.”

Early observations of the cosmic microwave background (CMB) by the SPT were extremely productive. Back when Vieira was a grad student and postdoc, he was tasked with cataloging all the supermassive black holes in those data, and he discovered a new class of galaxy that was very distant, dusty and gravitationally lensed. Such galaxies were invisible to traditional telescopes but visible in the millimeter spectrum of electromagnetic radiation in which SPT observes. Given how long it took for their light to travel to the Earth, these galaxies are among the oldest objects ever observed.

The data from the first-generation SPT survey were also used to discover massive clusters of galaxies, measure dark energy and create maps of the distribution of the mysterious dark matter underlying all the large-scale structure in the universe. 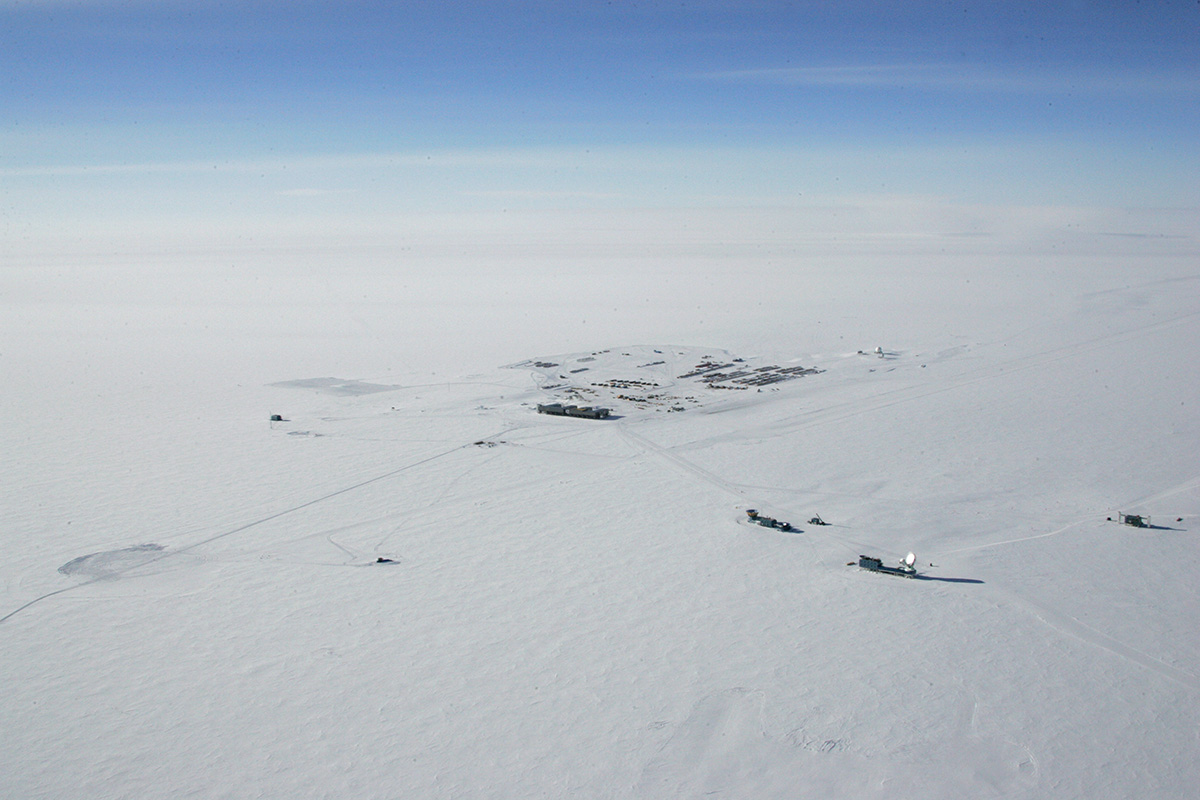 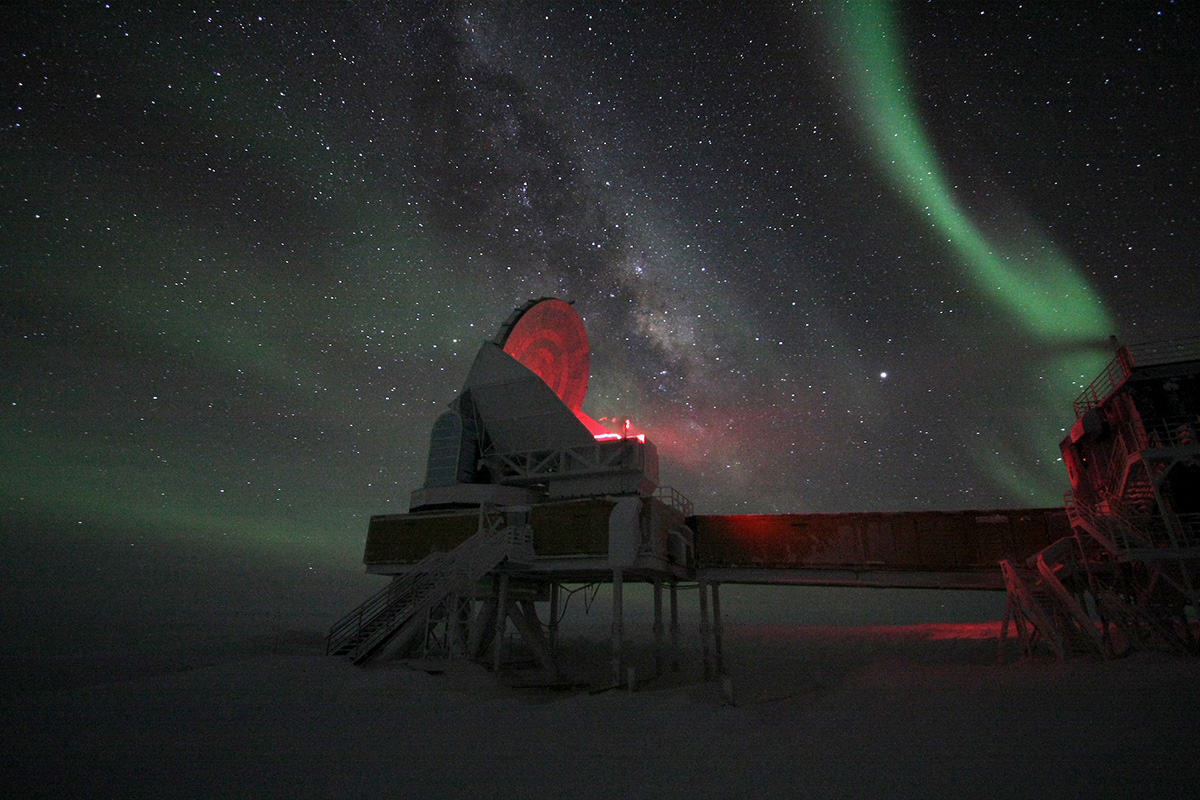 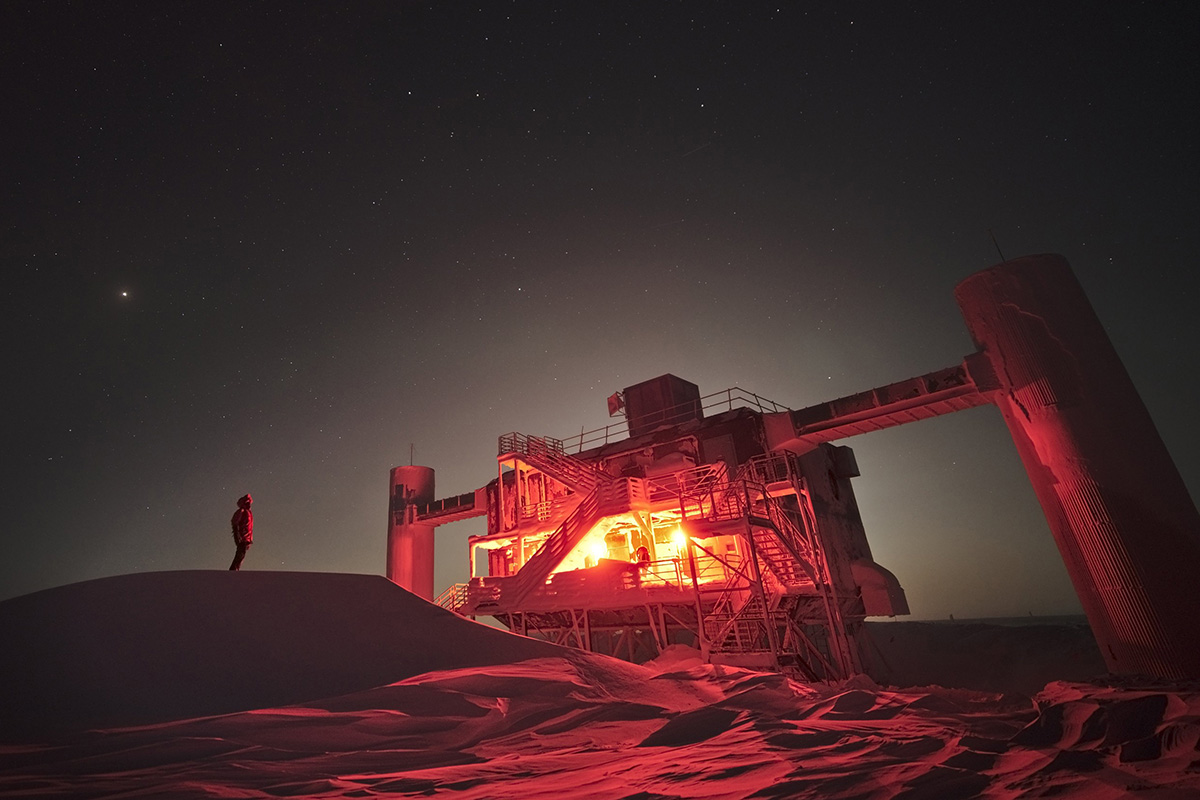 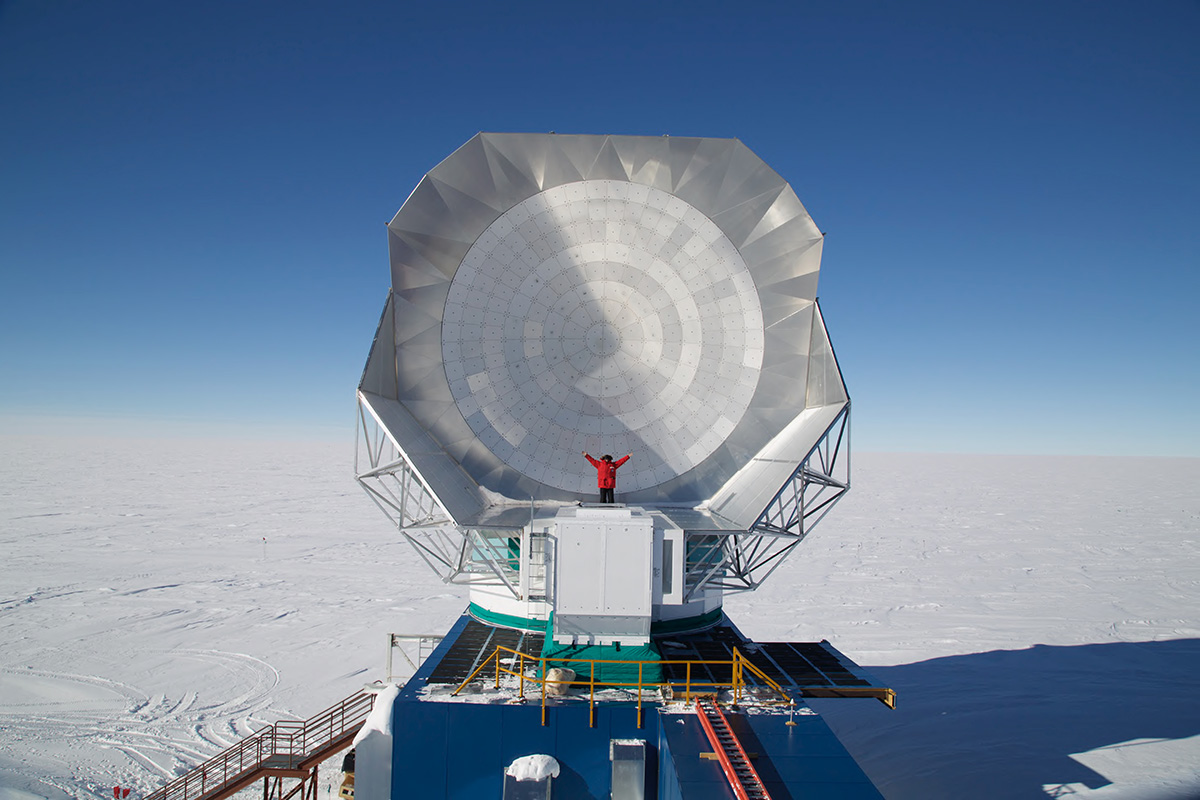 Vieira’s team at Illinois was heavily involved in the development of the third generation of cameras on the South Pole Telescope, which were installed a few years ago and are currently operating. It was highly specialized work. The equipment simply didn’t exist previously.

In the optical range, technological developments are largely developed by consumer electronic industries. At infrared wavelengths, the technology is largely developed by the military. Astronomers just have to say, ‘I’ll take one of those and put it on a telescope and make state-of-the-art observations.’ In the millimeter, there’s no other real application, besides astronomy. So everything we do, we have to do our own damn self. From scratch. With grad students. We’ll borrow things when we can. But most of the time we have to develop it from scratch,” Vieira said.

The CMB cameras use superconducting detectors to detect very small changes to magnetic fields that occur when photons strike. The detectors are read out with specialized amplifiers called SQUIDS, or superconducting quantum interference devices.  The detectors must be cooled to 0.3 degrees above absolute zero; the -60 degrees Celsius found at the South Pole is barely even a start. Each pixel in the camera sees three colors and two polarizations. The detectors were built at Argonne National Lab. The optics and portions of the electronics  for each one were built by the  Vieira team, and the cameras  were assembled at Fermilab.

As Vieira did in 2007, another graduate student, this time Andrew Nadolski, went to the South Pole  for the first season of operation  of the third-generation cameras.

“I went from finding new ways of working with basic materials like ceramics and plastics to develop new cryogenic optics, to climbing around a giant telescope at the South Pole in -80 degrees Fahrenheit and pitch darkness,” Nadolski told the Department of Physics a few years ago. “It’s been a wild ride, but it’s just getting started, because now we are getting the data and it’s a whole new adventure.”

One thing that’s been discovered on that adventure? Burping stars. More scientifically, those are nearby dwarf stars that have energetic flares bursting from them. These flares are similar to the ones our own sun emits, but with 100,000 times more energy.

“We have this funny name,  but these burping stars may have big implications for life in the universe,” Vieria says. “These are the most common stars in the galaxy, but it’s probably not good for life to be around a star like that…With that flare is coming intense radiation from relativistic electrons and X-rays. Maybe there can be microbes or something underwater, but it’s probably  not good for terrestrial life.”

A new $700 million observatory dedicated to observing the CMB has been recommended to the National Science Foundation and the Department of Energy and is in the works. That project is called “CMB-S4,” short for “CMB Stage IV.” Where the third-generation telescope had 16,000 superconducting detectors, the fourth generation will have 500,000 detectors. The large cameras will still be located at the South Pole, and others will be placed high in Chile’s Atacama Desert.

“The fourth-generation cameras is basically saying, ‘We now know how to do this. Scale it up. Mass-produce it. Make a big one’,” Vieira explained.

As with the previous generations, much of the work will be done at the University of Illinois. Vieira is on the project’s science council and is again designing optical components. Professor Jeff Filippini is designing parts of the SQUIDs and their readout systems. Professors Gil Holder and Peter Adshead are theorists figuring  out what the new cameras  might see.

Researchers have four key goals for the next generation of the project. They hope to measure what they call the “r,” the parameterization of the energy scale of the universe’s inflationary period. That measurement will give them a sense of exactly when in the universe’s very early history inflation happened. CMB-S4 will also be used to better understand the various flavors of light relativistic particles that permeate the universe, which may be  related to the mysterious dark matter. CMB-S4 will also study the large-scale distribution of dark matter and discover massive clusters of galaxies. Lastly, researchers will map the sky  at the millimeter wavelength  daily – allowing the community to capture and study more transient events, like those “burping” stars.

“Things like supermassive black holes at the centers of galaxies change on timescales of days to months. Exploding things that are massive like stars can be there  for days. And then all the way  down to stellar flares that are minutes,” Vieira said.

“When things go ‘Boom!’ you want to follow that up, and you  also want to see how the universe is changing day to day.”

The University of Illinois’ National Center for Supercomputing Applications is building a data interface so that researchers can get an alert when those things go boom, and so the entire astronomy community can access the SPT data easily.

For Vieira, all these improvements are thrilling as  both a technical achievement and as a vehicle for discovery. “Part of making these discoveries is, first, building a really state-of-the-art instrument and getting good data. You’re not going to get anywhere  if you have bad data. Or if you build a bad instrument,” he said. “So when you do find something surprising, it’s robust. With good data, you know, ‘This is real.’ But then the things we haven’t thought of yet, the surprises, are things  I look forward to…And, maybe, you’re making a discovery about the universe you hadn’t thought of.”

“Those two things going on at once is kinda the perfect combo. This long-term goal, this thing  we’re slowly marching toward.  And along the way, ‘Oh, wow,  cool! Look at that!’ One is like super, monk-level discipline and technical expertise and management.  On the other side, it’s like a kid  in a candy store, just following  one’s curiosity and sampling all  the flavors. And that’s why I love science. I love what I do.”

Back to Limitless Magazine Fall 2022