We Are All United By Food: Mapping the U.S. Food Supply Chain

In late 2019, Megan Konar and her team published the first high-resolution model and map of the United State's food supply chain. Bringing together eight sources of freight and shipping data, it shows a striking level of interconnectedness between regions in the US. It also highlights the counties that are most central to the food supply chain.

Megan Konar is a professor of civil and environmental engineering and supported in part by a National Science Foundation CAREER award. She talked about the food supply chain model and some of its key features.

“I've been surprised at the interest it’s gotten because I thought it was going to be a pretty technical algorithm paper that we built for ourselves to then go do more interesting things with," Konar explains. "We combine machine learning, linear programming, network statistics, and mass balance. We weave all of these different approaches together. It’s a new method of estimating high-resolution food flows in the U.S. It allows us to ask: What are the vulnerabilities and resiliencies in our food supply chain in the U.S.? What infrastructure is critical to our food supply chain? How might disruptions impact the delivery of food?"

"In particular, I’m interested in how water hazards impact food supply chains," Konar continues. "Everything from droughts to floods to unsustainable water use. How might these risks impact the food supply chain? But there’s been a whole bunch of other questions that people have been getting in touch with me about. Now they’re excited too. People who are interested in food waste across the country. How the fires in California are potentially disrupting the food supply chains. There’s already a whole bunch of people who are ready to use it in ways I hadn’t even considered. We want to better characterize these risks and use them in a network vulnerability model to say, “Given we have these characterizations of risks that our supply chain might face, what is the likely response?”” 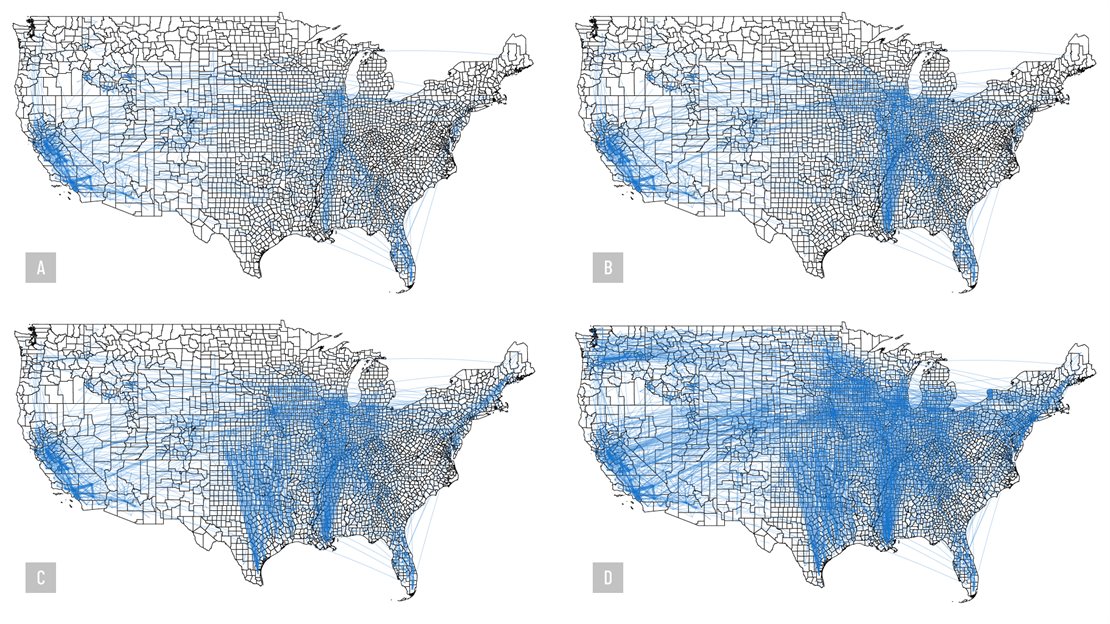 You can see how interconnected we are in this country, which is not very technical but why I think so many people have been interested in this work. We’re often hearing in the news how divided Americans are, so it’s nice seeing a map that shows how we’re all really linked together and we’re connected through our food system. Producers rely on consumers. Consumers rely on producers. They’re interconnected through transportation and refining of agricultural products. It’s a nice visual representation of how Americans are all connected—rural, urban, we’re not that divided. We’re actually very linked with one another.

VARIABILITY IN A COUNTY

A county-level view is very fine resolution, but there’s still a lot of variability in a county. The counties in California that we say are very important are very big. So there may be a fire burning in one part of LA County, but it’s not burning at the actual transit distribution hub, it’s not burning at the critical part of the food system. Even though we’re resolving things down to counties, which is pretty good and it’s a big advancement, we really want to know what infrastructure is important. And then have a better understanding of the exposure to risk in the infrastructure. The specific waterways, roadways, locks, harbors, rail lines, rail depots and all those things—because that’s where the food is actually going to be handled and moved. So disruption to those critical infrastructure elements would be more telling than an entire county.

The core counties are very connected and important in a metric called “betweenness centrality.” Betweenness centrality is a measure of the number of shortest paths in the supply chain that pass through a county. If that county was to be knocked out of the network, a lot of counties would lose their connection to one another. This is one statistical way to figure out where we might have some vulnerabilities. Those are really essential nodes, so if they were to be disrupted there may be ripple effects through the whole food supply chain.

The map makes it easy to see the counties that are really important to our food supply chain. Our model takes into account where agriculture is produced, where food is processed and consumed, and then all the transportation required to move food around between different hubs in the network.

Back to Limitless Magazine