Before the rise of PCs and the modern internet, a revolutionary system dove into the novel idea of computer learning. PLATO started as an educational tool. It became so much more.

PLATO and the Genesis of Computer Learning

In the early 1970s, a group of high school students in Urbana-Champaign found a passion for a new type of gaming. These early video games were simple; players navigate through the games using the keyboard, reading block letter instructions and controlling geometric orange figures. These fantasy and sci fi games—Avatar, Airfighter, Spacewar, and Empire—ran on PLATO, a system developed for computer learning.

These students enjoyed the communal computer gaming experience so much, they found a way to block other users of the system who were using it for classwork or research so they could be free to play.

It became such a problem that the Urbana Police Department had to approach Professor Don Bitzer, PLATO’s creator, to institute a 9 p.m. curfew for users under 16.

This didn’t kill gaming on PLATO. Between 1975 and 1978, gaming accounted for more than 20 percent of PLATO’s usage.

PLATO was a distributed computer-based learning system that was created at the University of Illinois. It was the first generalized computer assisted instruction system, and as it grew developers and users added functions like games. After its inception in 1959, PLATO systems were put in place across the world.

Decades later, anyone associated with remote learning in the past year can tell you that everything and nothing has changed. Much of the progress made can be traced back to PLATO. Developed at the University of Illinois at Urbana-Champaign, PLATO, or Programmed Logic for Automated Teaching Operations, was a revolutionary system based around the novel idea of computer learning, setting the stage for the internet and remote teaching being done now.

In the late 1950s the Controls Systems Laboratory at Illinois was moving away from the covert work they were tasked with at the beginning of the Cold War. Although much of what the lab worked on was classified, some of the research included work in the emerging field of computing. A team of three scientists had mulled over how computing could be used in all fields and levels of education.

PLATO launched under the direction of Bitzer in 1960. Along with scientific curiosity, Bitzer wanted to address education inequality.

“I’d been reading projections that said that 50 percent of the students coming out of our high schools were functionally illiterate,” Bitzer said in a 1997 interview. “[Sherwin] wasn’t afraid to ask big questions. One day he asked, ‘Why can’t we use computers for education?’”

The concept for PLATO was inspired by B.F. Skinner’s operant conditioning experiments where animals learned that pushing a lever would provide food. Believing humans would respond similarly, PLATO would be a “book with feedback.”

“Technology was just on the edge of being able to do some of these things if we used it creatively,” Bitzer recalled of that time. “And we had a laboratory of people that knew how to do creative things.”

Bitzer hooked a T.V. tube to the ILLIAC I mainframe on campus and information displayed on a TV screen. This would be many students’ introduction to computer learning.

By 1962, the university’s student newspaper The Daily Illini wrote that the system had administered lessons about anything from French verb endings to mathematics. The article uses ‘little Jimmy’ to tell readers how this fancy new system works.

Little Jimmy sits down at the screen for his lesson and flips the pages, typing on a keyboard if the system prompts him with a question. When he submits his answer, a bell rings. If he’s correct, he can move on, but if it’s wrong he’ll have to keep answering until he gets it right. He can ask for help of course, and PLATO will give more detail. He can flip back and forth throughout the lesson.

“And by the magic of electronics every answer he filled in appears in the appropriate place.”

B.F. Skinner’s theories were put to the test in Leal Elementary School in Urbana. By the 1970s, the school had a PLATO hookup but with a twist.

“At the grade school an M&M’s dispenser was hooked up to give the students candy when they completed lessons, and this system proved wildly popular, with students saving the M&M’s as trophies of their success,” a 2014 story on the program read.

Throughout the 1960s and 70s, technology progressed in a way that allowed PLATO to reach more students and developers for a lower price.

Initially PLATO operated in a single classroom in the Loomis Laboratory. It operated off of the ILLIAC I system and displayed on television screens, which was expensive. To make it usable in more spaces, Bizter came up with a more sustainable solution.

With the plasma screens, PLATO was able to grow exponentially. The university built cable lines to other university buildings, local Parkland College, and other local elementary schools.

In 1972 a change in PLATO’s mainframe allowed it to grow even further, and up to 1,000 users could work at once. As PLATO advanced, internal and national decision makers took notice. In 1968 the Illinois board of education invested over a million dollars after the National Science Foundation, the Department of Defense, and other federal agencies significantly backed in the project.

The Illinois Board of Higher Education praised PLATO while announcing they would not open any more public senior colleges in the state. “The University should develop plans for expanding the PLATO experimental program and for a possible eventual statewide PLATO teaching network, the board recommended,” a 1971 Daily Illini article read.

This added investment and attention made the newest iterations of PLATO usable for more than just simple coursework.

PLATO’s nature allowed students and coursework authors the same access to tools, bringing innovations and new programs from a variety of perspectives.

Woolley’s contribution, “Notes,” was an email-like and newsgroup system that linked up an online community.

“Empire,” a Star Trek-themed game is considered one of the first networked multiplayer games. These games lead to the app “Talkomatic,” which functioned as a chatroom for students across the country.

“People would hang out in a channel and chat or flirt with whoever dropped by,” Woolley wrote in his memoir “PLATO: The Emergence of On-Line Community”.

PLATO did not experience too much widespread success outside of the educational sphere, but there are some notable exceptions.

In his book “The Friendly Orange Glow” historian Brian Dear details how pilots in the 1980s used PLATO as part of their training for flying the Boeing 767.

PLATO was also used elsewhere in the skies. After President Ronald Reagan fired striking members of the air traffic control union in 1981, replacements needed to be trained.

“The Federal Aviation Administration was suddenly forced to hire a large number of personnel and train them as quickly and effectively as possible on air traffic control so the skies would continue to be safe for travel,” Dear wrote.

A large PLATO system was installed in an FAA facility in Oklahoma City, and worked so well that it was used for training into the 2000s.

By 1985 PLATO-IV was in use on over 100 campuses across the globe. Even the Soviet Union expressed interest in a hookup, though it never materialized.

Computer and online learning took another course as it entered the late 1980s, but PLATO’s influence is still apparent in remote learning and in the ways we use technology at large, especially as more and more classes are held at least partially online, with discussion forums or online quizzes.

“All of the features you see kids using now, like discussion boards or forums and blogs started with PLATO,” Bitzer said. “All of the social networking we take for granted actually started as an educational tool.”

Beyond gaming and social networking, PLATO influenced on the way people thought about education and technology.

At its beginning, students had to get used to the self discipline required to sit and learn and read themselves rather than having the information lectured to them. By 1971, however, students were starting to see the benefits.

I liked having the instant response to problems I had done,” Beagle said. “I feel I did better as a result of PLATO instruction.”

The common thread from students was the personalization in education that PLATO allowed. Over the course of the different versions, one thing that stayed the same was the students’ ability to work at their own pace.

Struggling students could take as long as they needed to get material right and not be forced to move on with the rest of the class, while more advanced students didn’t have to wait to keep learning. This also freed up class time for professors to devote more energy to discussions and critical thinking.

The changes and developments that defined the PLATO system came from everyday students and professors who were given the chance to try their ideas and bring innovative systems to life.

The themes that defined

PLATO continue in the remote learning necessitated by the Coronavirus pandemic. Educators from kindergarten teachers to post-graduate advisors are forced to rely on using online educational resources and use social tools to see, help and otherwise interact with their students.

“At its heart,” Dear said, “PLATO was the first major social computing environment.”

History is always happening around us, but sometimes it’s easy to notice when we’re in the middle of a moment. We’re in one of those moments now with the COVID-19 pandemic and various social and political movements. PLATO’s development and growth was also happening alongside the significant historical moment of the 1960s and 70s. Nowhere is that more evident than in the pages of The Daily Illini, the University’s independent student newspaper. Articles about PLATO’S origins and rise are nestled alongside wire reports about segregation, the Vietnam War, the Gemini missions, and more. 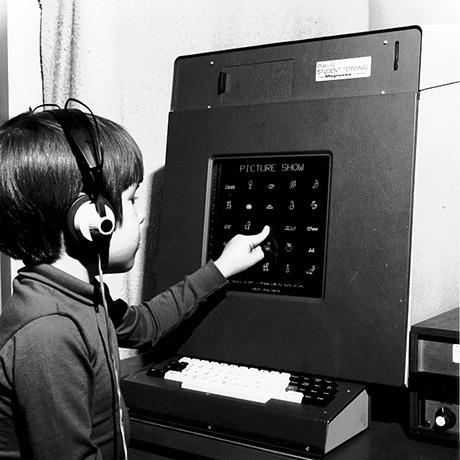 At an event for the Association for Computing Machinery in Denver professors Donald Bitzer and Peter Braunfeld discussed their new teaching machine, PLATO, and how they believed it could revolutionize education. 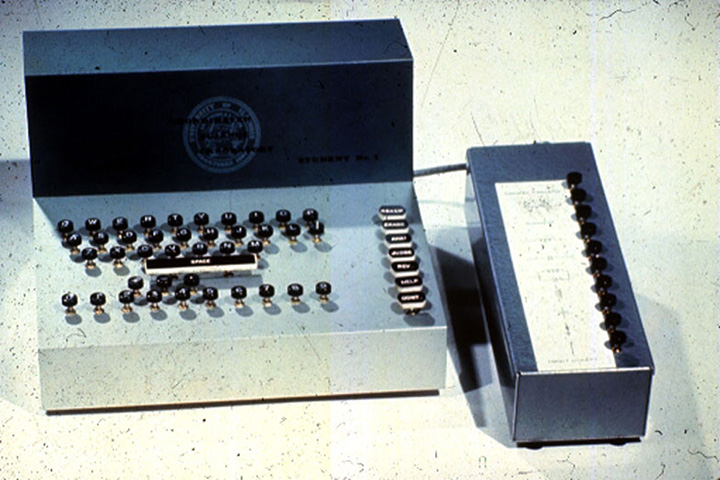 PLATO is ready to teach. The new ‘superhuman brain’ was launched. Some faculty members were skeptical of their new co-worker, wrote then-student reporter Dan Balz. Balz went on to be the Chief Correspondent at the Washington Post, where he has worked since 1978. 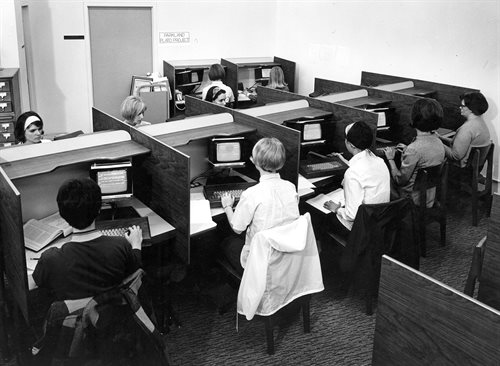 The Illinois Board of Education authorized $1.1 million to finance further development in the PLATO system, which aimed to put 4,000 student terminals in schools by 1974. 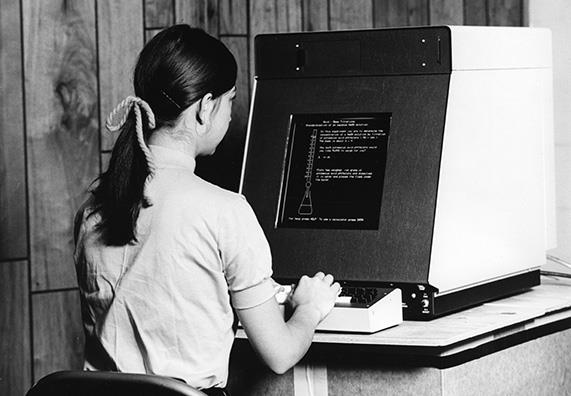 The Daily Illini published a thorough feature about PLATO and how it was becoming widely used for courses across campus and at other local schools. 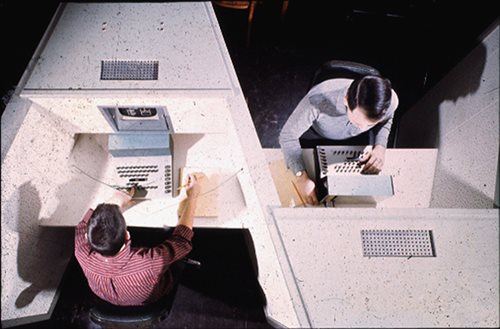 The College Board in Illinois announced no new public colleges would be built in the state, but praised PLATO for helping teach more students and supported continued expansion. 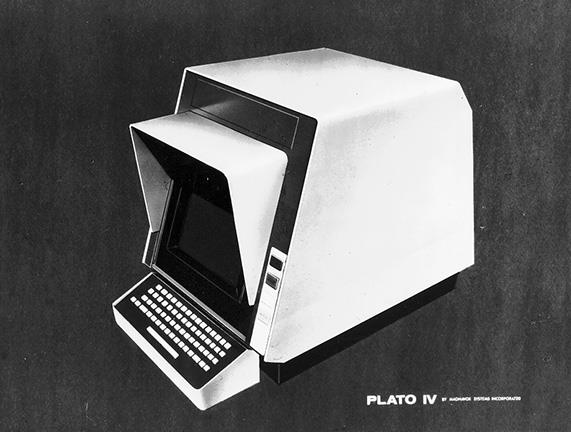 In the midst of the Cold War, the Russians wanted a PLATO hook-up. If the sale had gone through there would have been a flow of educational information between the U.S., Russia, and other nations.

Back to Limitless Magazine