Coral reefs aren’t threatened by a flood, but they are dying because changes are brewing in the ocean. A team that includes several Grainger Engineers is designing materials and structures to help save and restore those reefs.

A decade ago, many considered the prospect ridiculous. Breeding coral larvae and seeding them into the ocean to restore reefs? There were just too many factors working against it. Capturing delicate eggs and sperm, coaxing them to their larval state, and then setting those pinhead-sized clusters of cells loose to slosh around in the giant, powerful ocean? Expecting them to find an appropriate place to land and the biochemical conditions that allow them to grow? They’re tiny and fragile and slow to mature.

The odds were too terrible to consider

“That’s where we were in 2010 or 2012. Nobody thought large-scale coral breeding would be possible or, at least, contribute to reef recovery or restoration. To build a coral reef back was considered a wild, totally unreasonable thing to hope for,” said Kristen Marhaver, PhD, a marine biologist. “But, to all of our shock, the progress we as a community made in coral propagation and coral breeding went way faster than we ever imagined.”

Today, one of the groups that is moving fast is an international collaboration of mechanical engineers, civil engineers, materials scientists, and conservation and biodiversity experts led by Grainger Engineering’s Professor Amy Wagoner Johnson. The team is supported by a pair of National Science Foundation programs, Convergence RAISE (Award #IOS-1848671) and ECO-CBET Convergence (Award #CBET- 2133675).

They’re exploring what materials can be introduced into the ocean to encourage coral larvae to lock on, grow, and produce more coral. They’re also looking at how the larvae swim in ocean currents and arrive at their homes in the first place. Armed with those insights, organizations might someday be able to not only protect coral reefs from ongoing environmental damage but also restore them.

“All of these brilliant engineers and discipline specialists who know so much about materials opened up this whole world of possibilities to us ecologists who are used to being at a hardware store in the tropics with, like, between zero and two options to solve each problem,” said Marhaver, who is part of the team and based at CARMABI, the Caribbean Research and Management of Biodiversity Marine Research Station in Curacao. 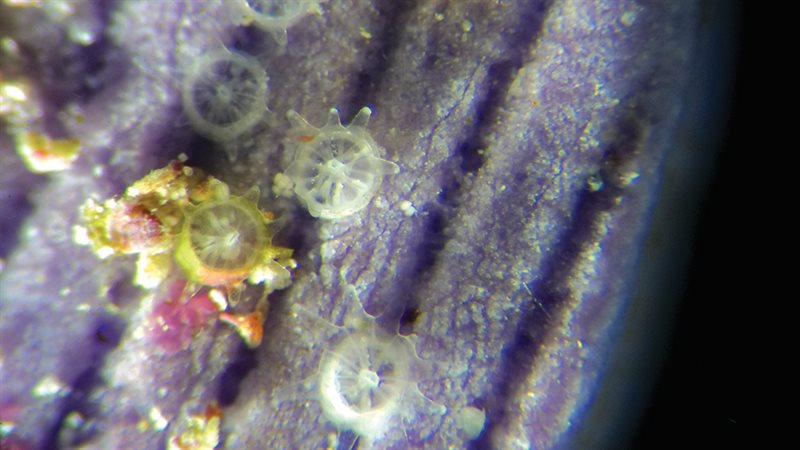 Coral thrive in waters that have a delicate chemical balance. When climate change or overfishing reduce the abundance of a species from those waters or when pollution is introduced, that balance tips out of whack. Predators aren’t eating smaller fish. Smaller fish aren’t scooping up algae and microbes as they eat. The microbes flourish, requiring more oxygen than they used to. The coral don’t have the oxygen they need. And, ultimately, coral die.

For years, people have been trying to encourage corals to grow anew. The most common approach, known as fragging, involves breaking off pieces of an existing coral colony. Those pieces are then reestablished and allowed to grow elsewhere. But fragging severely limits biodiversity and leaves new reefs vulnerable.

“Fragging does work, but there’s no genetic diversity. You’re just clipping a piece off. If that species isn’t disease tolerant or heat tolerant or whatever is killing the original reef, then you’re just propagating the same problems,” said Wagoner Johnson, an Andersen Faculty Scholar in Grainger Engineering’s Department of Mechanical Science & Engineering, head of the Department of Biomedical and Translational Sciences in the Carle Illinois College of Medicine, and affiliate of the Carl R. Woese Institute for Genomic Biology.

“There’s a season. The moon decides when the coral is going to spawn. You’re either able to collect the stuff or you’re not. It’s super intense — physically and mentally,” Wagoner Johnson said.

Each coral species only spawns over a window of a couple of days annually. Researchers know approximately when that window will be. But they still have to wait until the process actually begins. When it does, they SCUBA dive to the reef and carefully manipulate a net over the spawning coral. The eggs and sperm are funneled to a tube at the top of the net, and that “precious material,” as Wagoner Johnson calls it, goes to the lab.

If a geneticist’s work goes sideways, they order a new batch of fruit flies from their supplier. If a microbiologist fouls their culture, they move on to the next petri dish. But if a coral engineer’s experiment is a bust, they have to wait for the next breeding season.

“Hundreds of really smart people in the coral breeding community have been observing and studying, learning the rhythms and secrets. But to get these larvae is a field operation — a ton of supplies, 10 years of knowledge, and three days of extraordinarily careful work. And you only get to try once a year,” Marhaver said.

Once they have successfully raised larvae, the team can explore what materials best encourage them to latch on and start to mature. Typically, coral attach to and spread on hard surfaces on the ocean floor, usually limestone left behind by other corals. But by creating and tailoring new surfaces in the lab — what are known as substrates — the team believes they can increase the likelihood of coral thriving. “Maybe one in a billion coral larvae survive to adulthood [under natural conditions], but to restore dying reefs we might need one in 100 to survive,” Marhaver said.

Wagoner Johnson is working alongside Grainger Engineering Professors Rosa Espinosa-Marzal and Gabriel Juarez to improve those staggering odds. As part of early work on the project, they narrowed down what types of materials might make good candidates.

“We tried tons of different stuff to see what would happen,” Wagoner Johnson said.

Simple materials like glass? The larvae didn’t like that. Intricate, 3D printed scaffolds that the Wagoner Johnson team uses for medical research into regrowing bone in humans? The larvae weren’t interested. Acrylic in different colors? Not that. A clear polymer called PDMS that’s used in microelectronics? Nope.

Calcium carbonate — a common building material often used in mortar and grout — was very promising though. It’s cheap, it’s readily available, and the coral larvae seem to be attracted to its rough, porous surface.

Another upside of the calcium carbonate is that it is easy to mold. That allows the team to test different patterns on the surface of the material.

Juarez, who is a member of the Mechanical Science & Engineering Department, and his students test one-inch tiles in a flume filled with ocean water and either tracer particles or live larvae, depending on the experiment. Simulating larvae as they move in ocean currents near the team’s lab-made substrates, they capture video of the movement and track the behavior of each particle. They also create computational models of the moving water, larvae, and tiles.

They’ve tried tiles with crystalline patterns, quilt patterns, flat surfaces — even smiley faces molded into the calcium carbonate. Intersecting straight lines in a cross-hatched waffle pattern are the most promising.

Larvae swim but much more slowly than the ocean currents that carry them, making it hard for them to get anywhere. The waffle pattern, however, changes the game.

“In between the ridges, the flow is much slower. That gives them the chance to swim, investigate, and settle,” Juarez explained. The larvae are swept along until they happen into one of these spaces. Then they have a much better shot at attaching. In the team’s experiments, only a handful of larvae settled on a flat calcium carbonate tile, while as much as 90 percent of the larvae settled on a waffled tile under flow conditions like those found in the ocean. The team is now varying the distance between the ridges in the waffle to see if they can further improve the performance.

In addition to altering the surface of the calcium carbonate, the team is also tweaking its chemistry by introducing other materials — identifying additives that increase the likelihood that the larvae and juvenile coral will survive.

“Some additives are proposed to enhance the attachment, so the larvae go there and stay. Others are proposed to chemically call the larvae. They dissolve, they are close to the substrate, and the larvae...somehow sense them. [The larvae] go where the highest concentration of these additives are, which is close to the substrate. Then there are other additives that encourage the skeleton to grow. If those are not there, skeleton growth is slower, and the skeletons are more brittle,” Espinosa-Marzal said.

And, when working with calcium carbonate, including additives is particularly easy. “You have a dry powder, and this powder can be mixed with anything. Extracts from algae or other minerals. It’s like making a cake with your flour and your salt. You just mix them,” she said.

Once the team has cooked them up, the calcium carbonate surfaces can also be designed to dissolve, releasing beneficial substances into the water around them. So while some of the substrates would be there for larvae to attach to, others might disappear over time to increase the amount of oxygen or level of alkalinity in the water. 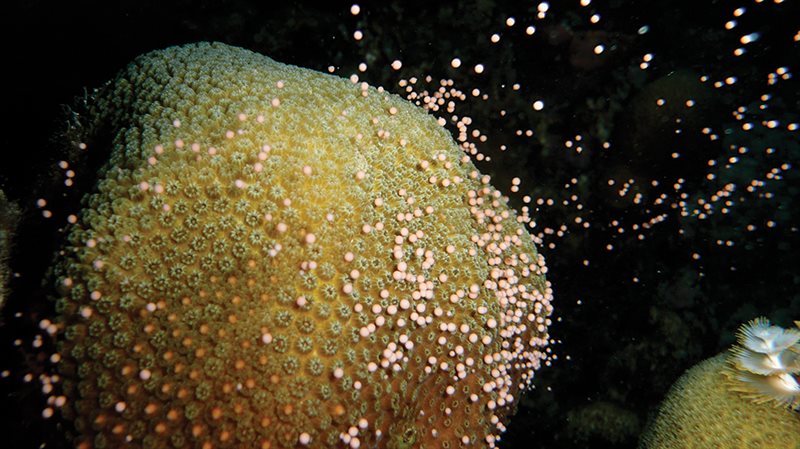 There’s still a lot of work to be done. The team is identifying new additives and surface patterns, characterizing how they behave, and testing them with live larvae in Curacao. But as they work, they also imagine.

Professor Forest Rohwer of San Diego State University and Dr. Linda Wegley Kelly of the Scripps Institution of Oceanography at the University of California San Diego are developing “coral reef arks.” These massive structures float in the ocean where oxygen levels and other conditions are generally better for corals than on nearby, degraded reefscapes. Researchers capture the biodiversity of the ocean floor using specially designed settlement structures left on the seafloor for months to years, then move those animals, microbes, viruses, and other creatures to the arks to live and breed.

The team is currently looking for ways to improve the arks with the new materials from the Grainger Engineering faculty members and the insights and techniques from coral breeding experts like Marhaver and others.

Rohwer described the ultimate outcome as “midwater zoos with luminescent corals, anemones, crabs and urchins, and circled by giant schools of fish...providing flora and fauna to restore reef communities and critically preserving coral reefs of the world.”

Back to Limitless Magazine Spring 2022