On a humid, fall day, students packed the 303-seat auditorium in Loomis Laboratory as Physics Professor Tim Stelzer brought his energetic style of teaching to his Electricity and Magnetism class. Grouped near the room’s top tier, Theresa Saxton-Fox, an Aerospace Engineering professor, sat with five fellow Collins Scholars; and Chris Migotsky, coordinator of faculty teaching programs for the Academy for Excellence in Engineering Education (AE3).

With i-clickers in hand, students turned their attention to diagrams of parallel capacitor circuits pictured on a screen above while the professors focused on Stelzer and his interactions with students. As Stelzer, an AE3 Education Innovation Fellow, climbed the stairs to better engage some of his students, Saxton-Fox looked down at her glowing tablet and took notes like, “Demonstrates good exam skills on ruling out multiple choice options,” and “Questions really build in difficulty. Reminds me of how I used to deal with math anxiety as a tutor.”

For Saxton-Fox, who began teaching at The Grainger College of Engineering last January, these classroom observations provide first-year faculty, enrolled in the Collins Scholars Program, invaluable lessons in educator training with an informal and accessible approach.

“Having role models for what teaching can look like makes the path towards excellence much clearer,” Saxton-Fox said, who observed both Stelzer and Leon Liebenberg, a Mechanical Science and Engineering professor, in his Design for Manufacturability class. “The program has been a great opportunity to reflect on my teaching, learn about evidence-based teaching practices, identify positive role models, and connect with my peers."

Wayne Chang, a Mechanical Science and Engineering lecturer who graduated from the Collins Scholars program last spring, is among the educators bringing these lessons into his own classroom.

“I did not have much formal training in teaching before coming to the University of Illinois; so having this program was like boot camp, but better because it’s fun,” Chang said, who also observed Stelzer during his enrollment. “Before Collins Scholars, I mainly focused on how well I communicated engineering concepts. Now, I am more equipped to think about different levels of learning, use different tools to engage students under different settings, and set and enforce expectations with students.”

“We are tasked with one of the most honorable and distinguished responsibilities: Teaching. This is a critical mission for all faculty as University of Illinois graduates will have the power and influence to shape our society.”

Migotsky and Hahn were in attendance when 21 Collins Scholars graduated from the program at the annual Celebration of Teaching event in 2019. That same week, there was another reason to celebrate. Just four days before, Illinois Engineering officially became The Grainger College of Engineering with a new $100 million gift from The Grainger Foundation.

Dean Rashid Bashir stressed the continued need for a program that guides new instructors in the “philosophy and science of teaching,” as he addressed a room full of AE3 staff, seasoned professors, and Collins Scholars in what is now the Nick Holonyak, Jr. Micro and Nanotechnology Laboratory.

“I think the impact that we’re having on the students comes from our core mission and our core priority, which is really at the end of the day, students,” Bashir said.

Bashir pointed to Illinois alumnus, William Wallace Grainger, a 1919 Electrical Engineering graduate, as one of those students who was positively influenced by his undergraduate years; and whose ties to the university continue today through his son, David Grainger, and The Grainger Foundation.

“I think it’s really because of the experience he had here as an undergraduate,” Bashir said, referring to Grainger’s generosity 100 years later. The Grainger Foundation’s total support is currently more than $300 million.

For Abigail Wooldridge, who received her Ph.D in Industrial Engineering from the University of Wisconsin-Madison, the program was essential in creating a sense of belonging for her and her fellow graduates.

“Some of us aren’t from here,” Wooldridge told the audience. “You put us all together in this room; we’re each having similar experiences, similar challenges, and similar wins that we all get to experience together.”

Abdussalam Alawini, a Computer Science teaching professor, echoed this sentiment when he took his turn to speak at what he described as a “real graduation.”

“It really is a community,” Alawini said. “Sometimes you feel lonely when you get stuck, so you have people to talk to in an informal setting.”

Across from a large photo hanging on the wall, picturing Holonyak, Jr., the Father of LED Lighting, was a table lined with AE3 drink mugs bearing the Block I on one side and the words, “What’s Next?” on the other. Bashir’s mind was also on the future as he lauded the program.

“How can we generate more innovation around undergraduate education?” Rashid said. “Let’s keep envisioning the future; live some part of our time in the future, and let’s work backwards to implement that vision now in the education space.”

The Academy for Excellence in Engineering Education (AE3), which has provided teaching resources since the mid-1990s, changed their program name from FastStart to Collins Scholars in 2010 in recognition of University of Illinois alumnus, William Leighton Collins (Civil Engineering, B.S. 1928, M.S. 1932). Collins, who taught Theoretical and Applied Mechanics from 1939 until 1965, became the first Executive Director of the American Society for Engineering Education (ASEE).

A memorial fund has been established in honor of Laura Hahn, the long-time director of the Academy of Excellence in Engineering Education. Give to the Laura Hahn Faculty Support Fund and invest in excellent faculty members and programs that advance Grainger Engineering’s innovations in education and learning. On the giving page, be sure to indicate “Laura Hahn Faculty Support Fund” in the “Other” box at the bottom of the page. 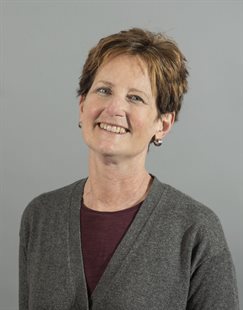