Paul Selvin earned a Ph.D. from the University of California, Berkeley, in 1990. Formally it was in physics, but in reality, it was in biophysics. The last experiment for his thesis, for example, was measuring the torsional rigidity of DNA by looking at a fluorophore intercalated in DNA, twisting around. A paper based on this experiment was published in Science (Selvin, 1992, Science) and later confirmed in a single molecule experiment (Bryant, Nature, 2003).

Professor Selvin did two sets of experiments during his postdoctoral training. One was developing a new type of fluorescence resonance energy transfer (FRET) based on lanthanides, called luminescence resonance energy transfer (LRET). He later used this technique to discover how a potassium ion channel, in part responsible for nerve conduction, responds to voltage (Cha, 1999, Nature; Posson, 2005, Nature). The second involved single molecule fluorescence—the first measurement of FRET between a single donor and single acceptor (Ha, 1996, PNAS).

After joining the Department of Physics at the University of Illinois in 1997, his interest has turned to molecular motors — proteins whose job is moving cargoes around the cell. For example, chromosomes are bound to molecular motors (kinesin and dynein) and under their power, are moved into the two halves of a cell during cell division. Selvin’s task was to determine how the motors moved. They were known to be dimeric, with two “feet,” held together by a head that consumed ATP (the universal food of the cell) and a stalk that bound to the cargo. It was also known that for each ATP burned up, these proteins moved between 8 and 37 nm, depending on the individual motor.

But did they move in a walking-type motion (also called “hand-over-hand”), or did they move as an inchworm does? A walking-type motion would move the back foot twice the center-of-mass distance, with the front foot not translating at all; an inchworm-type motion would move all parts equally—equal to the center of mass. The problem was that this distance for the walking motion was only 74 nm for the biggest motor, and 16 nm for the smallest motor—or 37 nm and 8 nm for an inchworm motion—about 30 times smaller than the diffraction limit of light, arguably the smallest distance that can be resolved with visible light.

The trick to get around this problem was to realize that a single molecule’s position can be located arbitrarily well. It’s much like a mountain peak, which can be located to within a few yards, even though the mountain itself may be a a mile wide. Similarly, a single molecule’s center can be determined to be its width (~250 nm), divided by the square root of the numbers of photons collected (see left diagram). Selvin and his group managed to collect 10,000 photons in 0.5 s, meaning that the fluorophore’s center could be determined to ±1.25 nm (250/√104). With some clever chemistry, the single fluorophore could last several minutes, meaning that Selvin could watch the fluorescently-labeled molecular motor take several steps (Yildiz, 2003, Science). He called the technique FIONA—Fluorescence Imaging with One-Nanometer Accuracy. 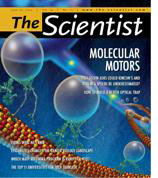 The first measurement was performed in vitro to control the amount of ATP that the motor “ate,” thereby slowing it down so each individual step could be seen. With FIONA, Selvin found that from the biggest motor, Myosin V, (Yildiz, 2003, Science) to the smallest motor, kinesin, (Yildiz, 2004, Science), to one in between (Myosin VI), (Yildiz, 2004, J.Biol.Chem.), the motors all moved in a hand-over-hand, or walking, fashion. This discovery won the award as one of the ten most significant advances in science for 2003, as judged by Science magazine. It also won for Selvin’s student, Ahmet Yildiz, Science’s grand prize (a world-wide competition) for the most noteworthy Ph.D thesis.

Selvin then looked in vivo, i.e., inside a cell (Kural, 2005, Science). Here the time resolution had to be improved to 1 msec—a 500-fold increase—because the ATP was now not under his control, and was at a fairly high concentration. The motion of individual kinesins, and individual dyneins, could be measured, and surprisingly, they could move cargo around more than 10 times faster than what had been measured in vitro!

Selvin is now combing FIONA with optical traps (holding particles with light) in vivo, to see how many motors are causing such large velocities. Selvin’s future plans call for measurements in situ, for example, in Planaria and in C. Elegans, to test how these motors act in “real life.”