Professor James N. Eckstein received his bachelor's degree in physics from St. Olaf College, Northfield, Minnesota, in 1973, and his PhD. in physics from Stanford University in 1978. He joined the Department of Physics at the University of Illinois as a professor in 1997, after 15 productive years as a senior scientist/research manager at Varian Associates in Palo Alto, California.

Professor Eckstein is widely recognized as one of the pioneers in the development of techniques for growing high-quality oxide thin films for the investigation of fundamental properties of cuprate superconductors and oxide magnetic materials. His development of atomic layer-by-layer molecular beam epitaxy (MBE) has enabled research on oxide films at new levels of precision and sophistication.

His work, together with collaborators at Illinois, Stanford, and Berkeley, has been central to recent research on superconductors using measurements of angle-resolved photoemission and terahertz conductivity. In addition, his group has developed some of the best planar tunneling junctions ever made with oxide superconductors and oxide magnets. His studies of magnetic tunneling in oxides have pointed directly to the role of defects in limiting the range of temperatures over which such junctions exhibit significant magnetotransport effects. His program on thin-film manganites has contributed significantly to the understanding of these complex materials.

Professor Eckstein is the holder of six U.S. patents.

Superconducting and Magnetic Materials
We have been studying the physics of colossal magnetoresistance using manganite films grown by atomic layer-by-layer molecular beam epitaxy. The films are atomically flat and have low-temperature transport rivaling that of single crystal samples. In our best samples, we have observed low-temperature residual resistivity of less than 50 Î¼W cm.

We have studied simple patterned transport samples extensively. We have observed a large anisotropy in magnetic behavior and magneto-transport that we attribute to spin orbit scattering. We have also seen that the metal insulator transition in our samples is independent of the magnetic state of the sample. That is, when the sample magnetization is fixed, the metal insulator transition occurs at a fixed temperature, independent of magnetization. 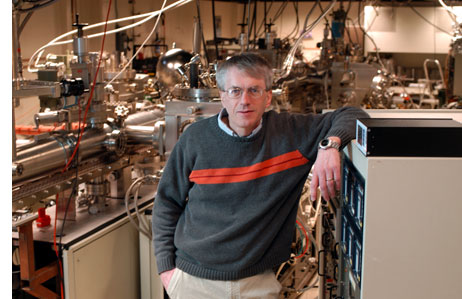 More recently, we have begun to study tunneling into these materials by assembling single-crystal tunneling structures, which consist of a base manganite film, covered epitaxially with a titanate barrier layer. Since the two species are well lattice matched, it is possible to grow such an interface continuously. The barrier is followed by an in-situ deposited gold film. The trilayers are patterned into mesa structure.

Interpretation of the tunneling is complicated by the spreading resistance of the manganite, which can be large. When the manganite is the most conducting, however, it is possible to obtain tunneling spectra that are predominantly caused by the tunnel junction. These spectra show metallic behavior in the manganite and no significant sign of the gap structure recently reported in samples investigated by ex-situ scanning tunneling spectroscopy. A small reduction in conductivity is observed near V=0, but this appears to be unrelated to the data shown in the STS report. We propose that the metallic tunneling obtained in these structures grown with epitaxial and in-situ interfaces is due to a metallic and ungapped density of states at the Fermi energy in the manganites.

The large conduction electron spin polarization in the manganite magnetic oxides such as La0.67Sr0.33MnO3 (LSMO) make them candidates for high sensitivity spin-valves. Previous manganite ferromagnet-insulator-ferromagnet tunnel junctions grown by laser deposition techniques (J. Z. Sun et al., Appl. Phys. Lett. 73 1008 [1998]; M. Viret et al., Europhys. Lett. 39, 545 [1997]) did indeed exhibit record magnetoresistance (MR) sensitivity at 4.2 K. However, this MR was found to decrease with temperature to decidedly "un-colossal" levels at room temperature, despite the fact that 295 K is well below the LSMO Curie temperature, and the spin-polarization is expected to be large.

Interfacial disorder (structural or compositional) leading to suppressed ferromagnetism is a likely explanation for the reduction in spin-valve magnetoresistance prior to loss of bulk ferromagnetic order. To address this issue, we have fabricated manganite spin-valve structures with crystalline SrTiO3 or CaTiO3 insulating barriers using molecular beam epitaxy for high quality interfaces, and control of doping and stoichiometry at the atomic level. We will discuss the extent to which "colossal" magnetoresistance in manganite spin-valves can be preserved at higher temperatures and low fields by atomic layer engineering of the interface.