Professor Beck is the creator, spokesman, principal driving force, and intellectual leader of the G0 experiment at Thomas Jefferson National Accelerator Facility. This collaboration of more than 80 senior physicists from 18 institutions is designed to elucidate a detailed spatial distribution of charge and current densities for strange quarks. The Illinois group, under Professor Beck's leadership, is responsible for the main instrumentation for the experiment, a superconducting toroidal spectrometer. The $2M magnet for the spectrometer was designed and tested at Illinois before being successfully installed at JLab. The eight internal lead collimators for the magnet were also assembled and tested at Illinois. 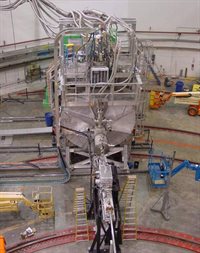 We are completing a series of measurements of the neutral weak currents of the nucleon using parity-violating electron scattering. Together with the ordinary electromagnetic currents of the proton and neutron, they allow us to separately determine the contributions of the various quark flavors. We are particularly interested in the contribution of strange quarks, because they are exclusively part of the sea of virtual quarks and gluons in the nucleon. Up and down quark pairs in the sea apparently interact with the medium to the extent that they have different momentum distributions. The present measurements will help us understand whether the heavier strange quarks are similarly affected.

We have also begun work on development of an experiment to measure the neutron electric dipole moment. Electric dipole moments for 'fundamental' particles like the neutron violate both parity- and time-reversal symmetry. Although the standard model of particle physics predicts a small but non-zero value for this quantity, the effects from physics at energies potentially accessible at the LHC may be significantly larger. Time-reversal violation is, in fact, a critical ingredient in generating a small excess of matter over anti-matter in the early universe (providing for our own existence), and, in many models produces an observable effect in the neutron.

Together with collaborators at a number of institutions including Berkeley, Caltech, Duke, Los Alamos and MIT we are developing an exciting new experiment to search for an electric dipole moment of the neutron. This is an intrinsically time-reversal violating quantity that is related to the observed preponderance of matter over antimatter in today's universe. In this connection, we are developing tools and techniques for handling polarized 3He at cryogenic temperatures as an integral part of the experiment.