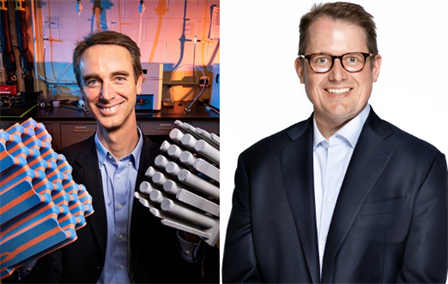 Two professors from The Grainger College of Engineering were named National Academy of Inventors Fellows.

Bill King (Mechanical Science and Engineering) and Paul Braun (Materials Science and Engineering) were presented with this honor because they “have demonstrated a highly prolific spirit of innovation in creating or facilitating outstanding invention that have made a tangible impact on the quality of life, economic development, and welfare of society.”

“This is a wonderful opportunity to celebrate the culture of innovation at Illinois,” said King. “It is an honor to be recognized alongside great innovators in the 2023 class of Fellows.”

He is the co-founder of three companies, including Anasys Instruments which was acquired by Bruker and sells materials characterization equipment that is widely used by academia and industry. He also co-founded Fast Radius, a company that sells software-driven manufacturing and was recognized by the World Economic Forum as one of the world’s most advanced factories. King was the founding Chief Technology Officer at the Digital Manufacturing and Design Innovation Institute, now known as MxD, which was one of the first institutes in the U.S. National Network for Manufacturing Innovation. In this role, he created and led a $100M portfolio of technology projects.

King is an elected Fellow of the American Society of Mechanical Engineers, the American Association for the Advancement of Science, the American Physical Society, the Institute of Electrical and Electronics Engineers, and SME International.

Braun, who is the Grainger Distinguished Chair in Engineering and director of the Materials Research Laboratory (MRL), joined the UIUC faculty in 1999. His research focuses on the synthesis of materials with carefully crafted nano- and mesoscale architectures which lead to the emergence of new optical, electrochemical, and thermal functionalities. Recent priority research areas include materials for energy storage, advanced optics, chemical sensing, and the control of heat for applications in energy, the environment and medicine.

He has a co-appointment as a professor in Chemistry and is affiliated with the Department of Mechanical Science and Engineering, the Department of Chemical and Biomolecular Engineering and the Beckman Institute for Advanced Science and Technology. Additionally, he co-authored a book as well as hundreds of peer-reviewed publications and co-founded three companies. Those companies are Autonomic Materials, Inc., Xerion Advanced Battery Corp., and TearDx.

Autonomic Materials, Inc. was created “to design smart protective materials that protect metal assets, protect the people that interact with those assets, and protect the environment,” said Braun. The mission of Xerion is to create batteries that are significantly lower in cost but also have a higher energy density, greater power, last longer, and are safer...all while having a significantly lower manufacturing carbon footprint. TearDx’s purpose is to create devices that unlock the potential of tear fluid for medical diagnostics.

“Inventions are a critical part of bringing the benefit of research at Illinois to the society at large, and I’m deeply honored that my efforts in translational research have been recognized by election to the 2023 class of fellows,” said Braun.

Both Braun and King will be inducted during a special ceremony in June 2023. It will happen at the NAI 12th Annual Meeting in Washington, D.C.

The NAI was founded in 2010 to recognize and encourage inventors with patents issued by the U.S. Patent and Trademark Office. Since its inception, there have been at least nine Illinois recipients, including GCOE Dean Rashid Bashir and the “Father of the LED,” Nick Holonyak, Jr.