"Nanocamera" takes pictures at distances smaller than light's own wavelength

How is it possible to record optically encoded information for distances smaller than the wavelength of light?

Researchers at the University of Illinois at Urbana-Champaign have demonstrated that an array of novel gold, pillar-bowtie nanoantennas (pBNAs) can be used like traditional photographic film to record light for distances that are much smaller than the wavelength of light (for example, distances less than ~600 nm for red light). A standard optical microscope acts as a “nanocamera” whereas the pBNAs are the analogous film. 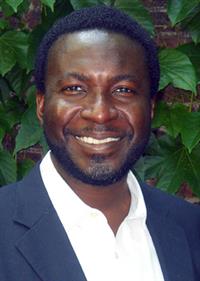 Kimani Toussaint
“Unlike conventional photographic film, the effect (writing and curing) is seen in real time,” explained Kimani Toussaint, an associate professor of mechanical science and engineering, who led the research. “We have demonstrated that this multifunctional plasmonic film can be used to create optofluidic channels without walls. Because simple diode lasers and low-input power densities are sufficient to record near-field optical information in the pBNAs, this increases the potential for optical data storage applications using off-the-shelf, low-cost, read-write laser systems."

“Particle manipulation is the proof-of-principle application,” stated Brian Roxworthy, first author of the group’s paper, "Multifunctional Plasmonic Film for Recording Near-Field Optical Intensity," published in the journal, Nano Letters. “Specifically, the trajectory of trapped particles in solution is controlled by the pattern written into the pBNAs. This is equivalent to creating channels on the surface for particle guiding except that these channels do not have physical walls (in contrast to those optofluidics systems where physical channels are fabricated in materials such as PDMS).”

To prove their findings, the team demonstrated various written patterns—including the University’s “Block I” logo and brief animation of a stick figure walking—that were either holographically transferred to the pBNAs or laser-written using steering mirrors (see video). 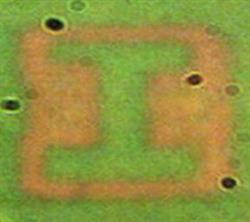 Image of the Illinois “I” logo recorded by the plasmonic film; each bar in the letter is approximately 6 micrometers.
“We wanted to show the analogy between what we have made and traditional photographic film,” Toussaint added. “There’s a certain cool factor with this. However, we know that we’re just scratching the surface since the use of plasmonic film for data storage at very small scales is just one application. Our pBNAs allow us to do so much more, which we’re currently exploring.”

The researchers noted that the fundamental bit size is currently set by the spacing of the antennas at 425-nm. However, the pixel density of the film can be straightforwardly reduced by fabricating smaller array spacing and a smaller antenna size, as well as using a more tightly focusing lens for recording.

“For a standard Blu-ray/DVD disc size, that amounts to a total of 28.6 gigabites per disk,” Roxworthy added. “With modifications to array spacing and antenna features, it’s feasible that this value can be scaled to greater than 75 gigabites per disk. Not to mention, it can be used for other exciting photonic applications, such as lab-on-chip nanotweezers or sensing.”

“In our new technique, we use controlled heating via laser illumination of the nanoantennas to change the plasmonic response instantaneously, which shows an innovative but easy way to fabricate spatially changing plasmonic structures and thus opens a new avenue in the field of nanotech-based biomedical technologies and nano optics,”  said Abdul Bhuiya, a co-author and member of the research team.

In addition to Bhuiya and Roxworthy, who earned his PhD in electrical and computer engineering at Illinois and is now a National Research Council postdoctoral researcher at the National Institute of Standards and Technology (NIST), the research team includes postdoctoral researchers V. V. Gopala K. Inavalli and Hao Chen. All are members of Toussaint’s Laboratory for Photonics Research of Bio/nano Environments (PROBE) at Illinois. Toussaint is currently on sabbatical as a Martin Luther King, Jr. Visiting Associate Professor at the Massachusetts Institute of Technology.