Illinois Students Compete in the "America's Cup of Rocket Science"

Illinois Students Compete in the "America's Cup of Rocket Science"

While the best soccer players are converging this month in Rio for the World Cup, competitors from 44 teams around the world, including engineering students from the University of Illinois, are vying for international supremacy in another highly intense contest.

It’s called GTOC, which stands for Global Trajectory Optimization Competition, and dubbed the “America’s Cup of Rocket Science.” It’s a biennial event that challenges the best aerospace engineers and mathematicians in the world to solve a “nearly impossible” problem in interplanetary trajectory design. 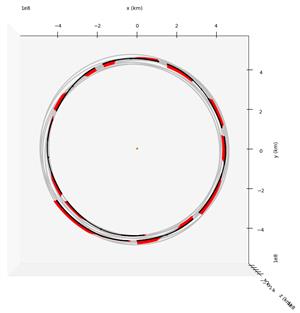 The diagram shows the flight path of probe three. The red indicates when the engines were fired.
This year participants are given a hypothetical “mother ship” with three probes. The mother ship can launch the probes at any time. But each has six years to visit as many of the known 16,000+ asteroids between Mars and Jupiter, stay 30 days at each, and return to the mother ship. The total allotted time between launch to landing is 12 years. Each team gets a point for every asteroid visited, but the probe must return to the mother ship to count. The Illinois contingent visited 25.

Illinois aerospace engineering (AE) students, which includes AE graduate students Ryne Beeson, Donald Ellison and Bindu Jagannatha and Chris Lorenz, an AE undergrad, are led Professor Vicki Coverstone and post-doc Alex Ghosh. They have teamed with members of NASA’s Goddard Space Flight Center, a formal partner of Illinois, and scientists and engineers from ai Solutions, a contractor for Goddard. The competition began May 20 with the topic unveiling and will end June 17, when each teams’ solution must be submitted. Results of the competition will be released in about two months.

While there are a handful of university teams participating, most are comprised of professionals. This is the third time for Illinois at GTOC, but its best shot to place, in large part due to its access to Blue Waters, one of the most powerful supercomputers in the world and the fastest on a university campus. To demonstrate Blue Waters power, in the course of about two hours, students ran calculations that would have taken six months of computing on a desktop computer.

“That’s an advantage to us over someone who doesn’t have a super computer the size of Blue Waters,” Ghosh said. “Of course, the technique we’re using and the approach may also influence us, but Blue Waters certainly gives us an edge.”

Blue Waters reserves a chunk of time for educational purposes, and the team was allocated 26,000 node hours for the GTOC competition project. At one point during the calcuations, 58 percent of the submitted jobs on Blue Waters came from the team.

Illinois also has the advantage of working with Dr. Jacob Englander at Goddard. Englander received his PhD from Illinois in 2012, and along with Ghosh, participated in the school’s first foray into GTOC in 2009. While at Illinois, Englander developed for NASA the Evolutionary Mission Trajectory Generator. It is the first fully automated tool that gives mission planners a preliminary set of detailed directions for steering a spacecraft to hard-to-reach interplanetary destinations such as Mercury, Jupiter, Saturn, and most comets and asteroids. Two of the four Illinois students in the GTOC contest are interning under Englander at Goddard and are able to access Blue Waters remotely.

The first GTOC competition was organized by Dario Izzo of the European Space Agency in 2005 and won by the Outer Planets Mission Analysis Group from the Jet Propulsion Laboratory. The winner of the previous contest serves as the “host” for the next competition, which involves developing the problem the teams will solve, verifying the results, and declaring a winner. The champion of GTOC 6 from 2012, Politicnico di Torino from Italy, is the host for GTOC 7.

This GTOC asteroid mission, while theoretical for purposes of the contest, is a real possibility for the future. Every 10 years, NASA conducts the Decadal Survey to guide future missions and solve problems based on questions that are at the forefront of the scientific community. The results from 2011 include understanding the origins of the bodies of the solar system by visiting asteroids.

“This particular contest, perhaps by coincidence or intentionally, addresses the method of how to explore the asteroid belt,” Ghosh said. “They’ve started to do some observation and remote sensing, but by sending a probe straight to an asteroid, they would be able to take much closer images. The techniques we are inventing to participate in this competition are perhaps the techniques that they are missing to set up that mission.” 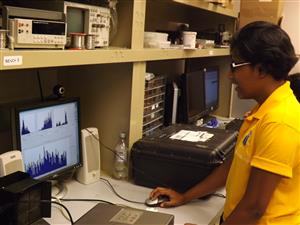 Bindu Jagannatha developed a program which helped the group identify the cluster of asteroids it wanted to visit.
Each member of Team Illinois plays a valuable role. Coverstone uses her years of experience in the field to develop an approach and concept while also providing a preliminary verification of results. Ghosh is the point person with the other collaborators and provides the parallel programming expertise. Engineers at Goddard and ai Solutions have used their tools to formulate solutions, which are then run on Blue Waters. Ghosh estimates the team has put in over 2,000 combined hours on the project with the students regularly putting in 14-hour days during the final two weeks.

“It’s been really great synergy, Ghosh said. “I don’t know if we could have been able to reach this point without everyone on the team, honestly. For every hour we’re thinking, we’re running Blue Waters, which is operating at a 1,600:1 ratio from human hour to computer hour.

Regardless of the results, Coverstone knows this has been a great experience for the students.

“I was excited to see the enthusiasm of the students being able to work with professionals, and see the relevancy of what they have learned in class,” Coverstone said. “They are getting a perspective on how it’s done in the real world and transferring book knowledge into practical knowledge. Some techniques will lead to conference and journal papers.”

“Academia doesn’t usually work on a deadline, but nothing inspires creativity like a deadline,” Ghosh noted. “We have definitely reinvented the wheel several times in the last three weeks in some of the ways we’re solving these problems. This will lead to tools that will be better in the future and give our students the ability to solve missions that are unique. After the fact, we’re going to take a deep breath and look at what worked and rebuild the best stuff from scratch instead of the duct tape and glue approach.”

“There is no prize money so we are really just competing for bragging rights,” Coverstone concluded. “However to go against the best astrodynamicists in the world to try to come up with the solution that scores the most points is just cool.”

If you have any questions about the College of Engineering or other ideas, contact Mike Koon, writer/editor, Engineering Communications Office, University of Illinois at Urbana-Champaign, 217/244-1256