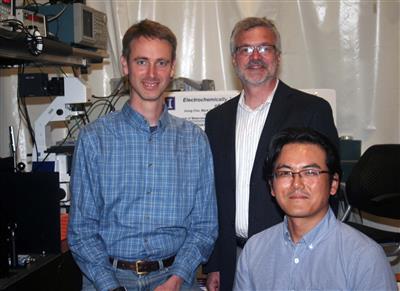 (l to r) Paul Braun, David Cahill, and Jiung Cho.
For the first time, researchers at the University of Illinois at Urbana-Champaign have experimentally shown that the thermal conductivity of lithium cobalt oxide (LixCoO2), an important material for electrochemical energy storage, can be reversibly electrochemically modulated over a considerable range.

“This work is the first experimental demonstration of the electrochemical modulation of the thermal conductivity of a material, and, in fact, the only demonstration of large variable and reversible thermal conductivities in any material by any approach, other than very high pressure experiments,” explained Paul Braun, a professor of materials science and engineering (MatSE) at Illinois. The results of research have been reported in the article, “Electrochemically Tunable Thermal Conductivity of Lithium Cobalt Oxide,” appearing in Nature Communications.

One technology that may be directly impacted by this work is the field of electrochemical energy storage. Understanding and controlling heat evolution and dissipation in rechargeable batteries is critical. Yet prior to this work, it was not even known that the thermal conductivity of materials commonly used as cathodes changed significantly as a function of the state of charge.

“Our work opens up opportunities for dynamic control of thermal conductivity and additionally, may be important for thermal management in electrochemical energy storage devices which use cathodes based on transition metals oxides such as lithium cobalt oxide,” added MatSE professor David Cahill, one of the paper’s co-authors.

A better understanding of the thermal properties of battery electrodes may help in the design of batteries that can be charged more rapidly, deliver more power, and operate with a greater margin of safety, since the heat generated during fast cycling and temperature variations in general are very detrimental to lithium-ion batteries.

Lithium cobalt oxide is a chemical compound commonly used in the positive electrodes (cathodes) of lithium-ion batteries. The process of lithiation (discharging) and delithiation (charging) of battery cathode materials is one of the basic electrochemical processes in lithium ion batteries. 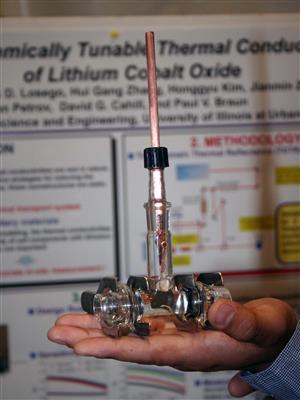 The in-situ TDTR liquid cell is composed of LiCoO2 thin film cathode, a Li anode, and liquid electrolyte.
“The experimental system is designed to be simple to avoid ambiguities common in thermal studies,” stated Jiung Cho, first author of the paper. “Lithium cobalt oxide film is sputtered directly on a metal coated electrode, and then immersed in a common electrolyte.” Time-domain thermoreflectance (TDTR) is used to measure the thermal conductivity of the lithium cobalt oxide thin film as a function of lithiation.

“We suspect our findings are quite general, and that this will only be the first example of transition metal oxides with oxidation-state dependent thermal conductivities,” Braun said.

Co-authors for the paper include Hui Gang Zhang, Honggyu Kim, Jianmin Zuo, and Ivan Petrov, in the Department of Materials Science and Engineering and Frederick Seitz Materials Research Laboratory at Illinois and Mark Losego at North Carolina State University. This work is supported by the Air Force Office of Scientific Research and the International Institute for Carbon Neutral Energy Research.