Researchers at the University of Illinois at Urbana-Champaign use a printing process to assemble tiny cells into multilayer stacks for extraordinary levels of photovoltaic conversion efficiency.

As an energy source, the Sun has always been a dependable provider. Although it freely shines on everyone, the ability to capture and convert the Sun’s abundant energy is anything but free. However, new technologies aimed at achieving “full spectrum” operation in utility-scale photovoltaics may soon make solar energy a viable option. 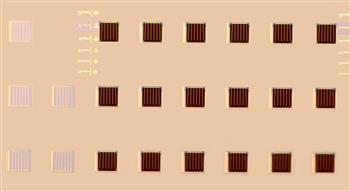 Printing-based assembly process yields arrays of stacked multi-junction cells in a fully automated step-and-repeat mode with high yields and accurate overlay registration.
“A few simple ideas in materials science and device assembly allow us to bypass many of the limitations of traditional photovoltaic technologies,” explained John Rogers, whose research group is developing these concepts. As a result of these new efficiencies, external industry experts project solar energy electricity generation costs that can reach, without subsidies, levels that are lower than coal, natural gas, and nuclear.

A Swanlund Chair and professor of materials science and engineering, Rogers is a pioneer in semiconductor devices and manufacturing techniques. A printing approach, developed by Rogers and colleagues at Illinois, allows manipulation of ultrathin, small semiconductor elements that can be stacked on top of one another to yield an unusual type of solar cell capable of operating across the entire solar spectrum at exceptionally high efficiency.

“The strategy involves high-speed, printing-based manipulation of thin, microscale solar cells and new interface materials to bond them into multilayer stacks,” Rogers said. “Quadruple-junction, four-terminal solar cells that we can build in this way have individually measured efficiencies of 43.9 percent.” 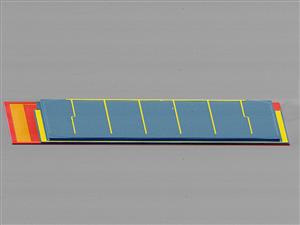 The top cell in the stacked 3-junction/germanium assembly captures wavelengths between 300 nm and 1,300 nm; wavelengths from 1,300 nm to 1,700 nm pass through to the bottom cell.
“This is a high-throughput, parallel assembly process that allows for simultaneous formation of arrays of stacked multi-junction cells in a fully automated step-and-repeat mode with high yields—greater than 95 percent—and accurate overlay registration. A newly developed interfacial material for these stacks enables ideal optical, electrical, and thermal properties. ” stated Xing Sheng, a postdoctoral fellow with Rogers’ research group and first author of the paper, “Printing-based assembly of quadruple-junction four-terminal microscale solar cells allows realization of extremely high-efficiency modules,” published this week in the journal Nature Materials.

The project involved a collaborative team of researchers at the University of Illinois and the photovoltaic companies Semprius and Solar Junction. According to the group’s paper, the module’s top cell consists of a three-junction (3J) microcell with its own anti-reflective coating to ensure efficient transmission of light to the uppermost layers. The bottom cell uses a diffused-junction germanium (Ge) architecture. In a stacked 3J/Ge assembly, the top 3J cell captures light with wavelengths between 300 nm and 1,300 nm. Wavelengths from 1,300 nm to 1,700 nm pass through to the bottom Ge cell with minimal interface reflections, due to the use of a thin layer of a unique type of chalcogenide glass. 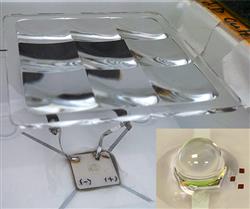 “This is very nice work. The results are impressive, and the schemes appear to provide a route to ultra-high efficiency photovoltaics, with strong potential for utility-scale power generation,” stated Ali Javey, a professor of electrical engineering and computer sciences at the University of California, Berkeley. Javey, who is a program leader for electronic materials at the Lawrence Berkeley National Laboratory and a co-director of the Bay Area Photovoltaics Consortium, was not involved with this research.

Rogers is the director of the Frederick Seitz Materials Research Laboratory and also is affiliated with the Beckman Institute for Advanced Science and Technology, and the departments of mechanical science and engineering, chemistry, bioengineering, and electrical and computer engineering at Illinois. Semprius, co-founded by Rogers in 2006, is commercializing ultrahigh efficiency photovoltaic modules, and has sold units that are now in operation at 14 sites around the world.
______________________

Contact: John A. Rogers, Department of Materials Science and Engineering, University of Illinois at Urbana-Champaign, 217/244-4979.