As humans modify the earth’s landscape to suit their purposes, their activities can have far-reaching effects on the environment. Of particular concern to those who study these effects is the region from the top of the plant canopy to the bedrock beneath. This area—called the critical zone —is now a special focus for scientists, thanks to a National Science Foundation initiative to study human impact on the environment through a network of nine instrumented locations across the country called Critical Zone Observatories (CZOs). Praveen Kumar, a professor of civil and environmental engineering (CEE) at Illinois, is leading a $4.9 million, multi-disciplinary, multi-institution project to establish the first CZO in the Midwest. 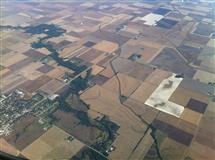 Intensively managed landscapes encompass agricultural, urban, and natural environments where human modifications of the landscapes intersect with the natural legacies of the land.
In the Midwest, human beings have intensively modified the landscape within the last 200 years to make the prairie more capable of sustaining agriculture, Kumar said. Millions of miles of tile drainage systems were installed to remove excess water from the soil. This made the land—already hospitable to farming because of its flat landscape and rich, organic soil—even more ideal for agriculture. But these modifications may have led to unintended consequences for the critical zone, which functions as “a cohesive unit with living and non-living things interacting,” Kumar said.

In order to understand how these and other modifications have affected the critical zone—the NSF is funding nine CZOs in various areas.

"The critical zone provides most of the ecosystem services on which society depends, such as clean water, food, nutrients, soil and carbon storage," says Roger Wakimoto, NSF Assistant Director for Geosciences. "Researchers at the new CZO sites will investigate the past evolution and present state of the critical zone to predict how Earth's surface will evolve in response to future human activity and to climate change. The results will provide the scientific basis for decision-making on how humans can best mitigate, adapt and respond to both slow and abrupt environmental changes."

[image:8746 class:fright]The Midwestern CZO will consist of two core sites, one located in the Upper Sangamon River basin measuring 3,600 square kilometers and the other in Clear Creek Watershed in Iowa measuring 275 square kilometers. A third, partner site is located in the Minnesota River basin in Minnesota. Instrumentation will be installed to monitor baseline characteristics such as rainfall, radiation, evaporation, carbon dioxide use by plants, and the flow of nutrients, sediments, organic carbon and water. Researchers will also collect soil samples to map the paths of nutrients and sediments, and examine previously collected data to understand historical trajectories. The result will be a very detailed, comprehensive picture of the natural processes going on throughout the CZO, Kumar said. The sites will serve as a resource for researchers, educators and students in fields including engineering, geography, geology, soil science and ecology, he said.

“The observatory is aimed at understanding how natural processes happen together, how they co-evolve and how human modification has altered that,” Kumar said. “What is the limit to these modifications and what do we need to do to recover many of the functions that originally made this land productive?”