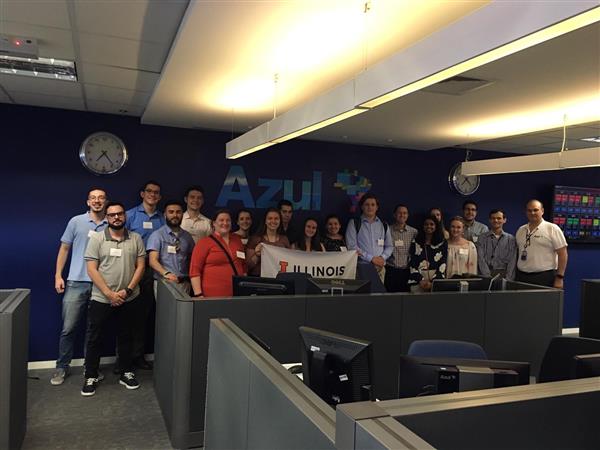 Nectarios-Nicholas Kourtis visits Azul during a summer 2019 trip to Brazil.

On March 23, the classes and programs at the University of Illinois at Urbana-Champaign abruptly shifted to a virtual format due to the ongoing COVID-19 pandemic. For The Grainger College of Engineering’s International Programs in Engineering (IPENG), this included the cancellation of all study abroad and international engagement programs for the summer. However, through a partnership between companies in Brazil and South Africa and the University, students still had the opportunity to complete global virtual internships over the summer, where students can become virtual pioneers while “responding to real needs.”

A senior in aerospace engineering, Nectarios-Nicholas Kourtis’ career goal is to work in the airline industry. When he learned about an internship being offered by Azul Linhas Aereas, an airline company in São Paulo through aerospace engineering professor Brian S. Woodard, he saw the opportunity to gain career experience. Kourtis said he was familiar with Azul because of a trip to Brazil during the summer of 2019, and throughout the next summer, he worked as a revenue management intern for the company.

In this role, he collaborated with other interns in developing a strategy that would help the company to identify unprofitable bookings, and met with supervisors once a week to discuss their progress. In place of in-person meetings, all communication happened through email and Microsoft Teams with supervisors, and the team of interns used Whatsapp and Zoom.

Through working with Azul Linhas Aereas, Kourtis said he gained experience with working on a diverse team of peers from different cultural backgrounds, and with managing a team whose members are located in different time zones.

“Overall, this was a very positive experience for me, “Kourtis said. “As someone who has never had the opportunity to work in the airline industry before, Azul gave me my first opportunity to gain professional experience in the field.”

The company invited him to continue working with them until the end of December, something which he said is motivating him to gain more knowledge of the airline industry by being involved in new projects.

“As someone who already has lived in a country other than the United States [Athens, Greece], being involved in stuff that does not just focus on things that happen within the U.S. is second nature to me,” Kourtis said. “I think people who have never had the opportunity to get to really know people who are non-American would benefit from such an experience as it would allow them to see different perspectives and learn more about other cultures.”

“I learned about this opportunity through an email sent out by Engineering Career Services this summer detailing remote opportunities for the summer of 2020,” he said.

As a mechanical engineering intern, his responsibilities included maintaining the computer aided design (CAD) assembly of the company's first satellite that they designed and plan to launch themselves, creating PDFs of the CAD file for marketing purposes, using CAD software, and maintaining communication with retailers and companies in the US.

Tetzeli said the most memorable project for him during his internship experience involved the creation of satellite renders, and turning the assembly in CAD into PDFs that detailed exactly how the satellite would operate, and how a theoretical constellation of satellites would look while rotating the earth. This experience, he said, allowed him to gain CAD skills, but also an understanding of what it means to be an engineer in a professional environment and how to adapt to unique, unexpected work situations

“I think that international engagement is an important part of a college experience because it allows for the exploration of different cultures,” he said. “The United States has companies which largely operate in similar ways in terms of work environments and company cultures, and understanding how that can differ internationally is beneficial. Especially for people with management aspirations, knowing about a multitude of different ways that business people might conduct themselves is valuable knowledge.”

Before the COVID-19 pandemic, Stephanie Dutra did not plan on participating in an internship over the summer. However, when she received an email from an advisor about a virtual internship with Parque Tecnológico SJC, a technology park in São José dos Campos, Brazil, she thought it would be a nice opportunity to participate in as she was social distancing at home.

A sophomore in aerospace engineering, Dutra worked as a summer engineering intern for the technology park, where she was responsible for completing a project proposal on innovation research within the field of urban mobility. To carry out this responsibility, she conducted research and attended meetings with her supervisor and peers via video call, presenting her report later on in the internship.

“I learned a lot from my experience at Parque Tecnológico and gained many skills that will help me as I continue in my professional career,” Dutra said. “Having to start and carry out a project from scratch without being told exactly what to do forced me to learn and trust myself in the process, and also helped me improve with asking questions.”

She said she also gained professional insight into how projects are started, the business and economical side of proposed ideas, as well as how to consider the impact of technology on society and what is needed for it to function. Dutra said this experience is helpful in systems engineering, the field she is currently pursuing.

One of her favorite parts of her internship with Parque Tecnológico SJC was her opportunity to work with her peers in Brazil, an experience which Dutra said allowed her to form great friendships, even in a virtual format. We must look outside of our own bubble, she said, to understand how we can best work toward global improvement as college students.

“International experiences push you out of your comfort zone, but also help you learn lessons you wouldn't have learned elsewhere. Especially within technology and start-ups, we don't realize how geographic location affects our ideas, plans, and careers,” Dutra said. “I had to take into account numerous times how the difference in economy and government affected how start-ups can be created and technology started and patented. But more than that, I think it's important to recognize the global impacts of our work, and we can't best guide those until we have a better global perspective.”

As an intern for LACE Engenharia, an engineering company based in São José dos Campos, Brazil, Eric Monson considers attending meetings from a jet ski in the middle of a Montana Lake, a location with better reception, to be his most memorable experience.

A sophomore studying aerospace engineering with a minor in computer science, Eric Monson describes himself as a person constantly in search of “culture shock.” In fact, his plans before the COVID-19 pandemic were to travel to Brazil for a two week study abroad experience with Woodard and some of his classmates. When the pandemic began, however, the trip could no longer take place.

Nevertheless, Monson said Woodard reached out to him in May with the opportunity to complete a virtual internship with LACE Engenharia. For this internship, his goal was to gauge the global market on its acceptance of a new electromagnetic compatibility testing product that LACE planned to develop and produce in the upcoming years. This goal required interface with various companies and researching financial reports and market analysis documents to support their findings, he said.

“In terms of team structure, I would like to believe I sort of took the position as co-lead of the project with one Brazilian economics student who was also working on our team,” Monson said. “Each week we had to do research on a given topic (of our choosing) and deliver it in a comprehensive presentation. As the project progressed, these presentations became more and more complex until we presented a file, formal presentation to the executives of the company.”

Working with the other interns resembled more of a group project than a formal internship, he said, because of the friendly people. Along with his internship experience, Monson was also able to virtually attend classes to learn Portuguese, Brazilian cooking classes, and participate in chats over coffee with some of the other students.

“When I first started this internship, I felt a bit confused and displeased by the fact that all I was going to be doing for the next few months was market research,” he said. “I was hoping that I could actually apply my engineering skills in a professional environment to get a taste of what I might actually like to do in the future. However, as time went on, I actually came to really enjoy what I was working on. I now know that the way to get a ‘feel’ of a global market is not to dry-call AT&T, but rather to find publicly available financial reports from a number of different companies.”