Computer science student Ananya Cleetus wants people to know that good things come from failure. For some, her leaving school to focus on her mental health may seem like a failure in some ways, an experience different from the “linear path” of going to college, graduating and getting a job. For Ananya, however, she also feels she’s gained a lot from that experience, including insights that can help others in similar situations. 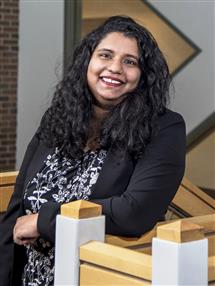 Currently a junior, Cleetus was awarded the Fiddler Innovation Fellowship for Anemone, an app she designed to support users through mental health crises.

“I think mental health is still a very stigmatized topic, and I kept seeing people work on research in all sorts of different areas,” Cleetus said. “But I feel like mental health is something that is still such a difficult topic even in engineering to talk about, to broach not only in terms of an academic or research perspective, but just in general.”

The Fiddler Innovation Fellowship is a $10,000 scholarship awarded to an ‘innovative’ undergraduate student each year. It is presented by the Illinois eDream Institute.

Cleetus said she initially felt intimidated competing against PhD students as an undergraduate, but was encouraged by the diverse range of competitors.

“I realized that a good idea is a good idea, no matter what your background is, where you’re from, or what your focus is,” she said. “And I think I really appreciate the fact that the competition really highlighted that, that all these different forms of innovation in different fields, different topics, people of different majors, backgrounds, educational backgrounds, it was all focused on the idea and the innovation itself and I thought that was really, really cool.”

Though she has not made concrete plans as to how she will allocate her $10,000 cash prize, Cleetus said a large portion of the money may go towards improving the app and developing additional features.

Anemone gives users the option to create a crisis plan, which provides information including warning signs, coping methods, medications and emergency contacts in the event of a mental health crisis. The plan can be shared with family, friends, first responders and mental health clinics. Users also have access to emergency resources through the app, along with coping skills including deep breathing, mindfulness, diversion skills and grounding.

Cleetus has given a TEDxUIUC lecture about mental health and Anemone, and was also featured in a Daily Illini article for her work towards mental health support on campus.

“Especially with this pandemic, I think the biggest thing that people are dealing with in terms of mental health are a couple of different things. One is obviously just the transitions that are going on...but I think the other big thing that's going on for a lot of people is the lack of structure,” she said. “They don't get to go out, they don't get to do certain things that normally establish their daily pattern. And so I think in both situations, it's really important to be proactive about your mental health.”