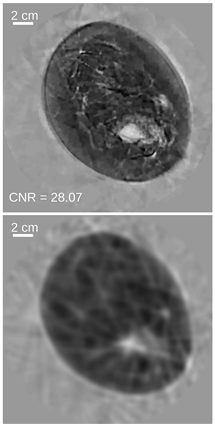 Sound speed images of a breast cancer patient reconstructed by use of (top) a waveform inversion method and (bottom) a conventional bent-ray method.
Mammography is the current state-of-the-art method for detecting and diagnosing breast cancer. However, even a mammogram doesn’t detect certain subtle breast cancers, especially those in younger women who typically have denser breast tissue. In the growing need to improve imaging techniques, the United States Department of Health and Human Services has awarded an RO1 grant titled “Advanced image reconstruction for accurate and high-resolution breast ultrasound tomography” to teams at the University of Illinois at Urbana-Champaign and Wayne State University.

Mark Anastasio, Donald Biggar Willett Professor in Engineering and the Head of the Department of Bioengineering at Illinois, is the contact principal investigator on the project and is teaming with co-PI Neb Duric, an internationally acclaimed leader in ultrasound imaging research from Wayne State. Duric is also the Chief Technology Officer of Delphinus Medical Technologies, which is commercializing his ultrasound tomography techniques.

“The current methods of mammography or tomosynthesis are based on X-rays,” Anastasio noted. “Some small early stage cancers especially in younger women are difficult to detect in such images so the industry understands the need for improvement. We’re investigating this new technology that can be useful for breast cancer imaging that is based on the use of ultrasound instead of X-rays. Not only is it safer because it doesn’t involve ionizing radiation, it is more sensitive to certain tissue properties that will make it easier to detect subtle breast cancers.”

Ultrasound tomography utilizes ultrasound waves to interrogate an object and tomographic principles for image formation. It is mostly employed to image soft tissues in medical imaging applications, especially breast imaging. Similar to X-ray CT and magnetic resonance imaging (MRI), ultrasound tomography requires use of a reconstruction method to compute an image that depicts the internal structure of the object. Image reconstruction and computational image science is the core expertise of Anastasio’s lab.

While Duric’s team has pioneered the ultrasound tomography method, the final images aren’t as clear as desired. Through the RO1 grant, Anastasio’s team will try to improve the quality of the images. To do that, they will develop physics-based computational models and advanced image reconstruction methods.  High-performance computing methods will also be required.

“We quickly realized that through the use of advanced image reconstruction principles and high-performance computing, we can actually do a better job of modeling the physics and reconstruct images of much better quality,” Anastasio explained. “They almost look like MRI images in terms of resolution.”

Both Duric and Anastasio chose to focus this technique on breast cancer detection, partly because it is a disease the affects a vast number of women, but also because it is a part of the body where ultrasound tomography will work relatively well.

“If you wanted to image a thicker part of the body, say the abdomen, it would be tougher because the ultrasound would be more attenuated and more scattered,” Anastasio said.

Over the course of the four years of the grant, Anastasio’s team plans to model the interaction of ultrasound energy with the breast tissue as well as the response of the imaging system. They’ll characterize the model in a computational tractable way, then invert to form the image. They’ll uses those computations to develop an algorithm and work with Duric’ team on the experimental side. Once they are able to form accurate images, the final piece will be to work with radiologists to refine the reconstruction methods to maximize the clinical utility of the produced images.

“In the end, we hope to have a fully optimized and validated image construction algorithm where we can reconstruct 3D images of the breast that can be subsequently evaluated in large scale clinical trials and turned into a useful product,” Anastasio concluded.

Once successful, the method could profoundly improve the early detection of cancerous tumors, especially in younger women. In addition to improved screening capabilities, it could be also be used for evaluating risks for developing cancer (such as detecting biomarkers), which could lead to personalized screening methodologies. It could also be used as an aid in evaluation to know how a patient is responding to a given therapy.