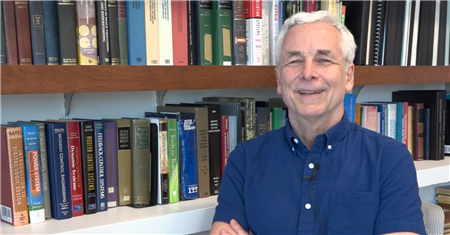 Bruce Hajek, an internationally renowned expert in the field of communications networks, and a 40-year veteran of the Grainger College of Engineering faculty, has been named the new head of the Department of Electrical and Computer Engineering (ECE).
“Bruce has an impeccable record of research, teaching, and service at the department, college, and campus levels,” Grainger Engineering Dean Rashid Bashir said in making the announcement. “He has a solid understanding of the internal operations of the department, given his strong commitment over the years for administrative service and committee work in support of all faculty affairs.  He will be able to inspire faculty and promote faculty mentoring at all levels.”
“I am looking forward to the conversations and the interactions among the students and faculty about how we can make best use of the resources we have here," Hajek said. "There are so many opportunities for students and I’d like to see students take much more advantage of the opportunities they have here.”
Hajek holds both a B.S. in mathematics and an M.S. in electrical engineering from Illinois as well as PhD in electrical engineering from the University of California-Berkeley. He joined the ECE faculty as an assistant professor in 1979 and was promoted to associate professor in 1982 and professor in 1985. He was named the Leonard C. and Mary Lou Hoeft Endowed Chair in Engineering in 2006, a position he still holds.
Hajek was appointed to the National Academy of Engineering in 1999 “for contributions to stochastic systems, communication networks, and control.” He is Guggenheim Fellow as well as a Fellow of the Institute of Electrical and Electronics Engineers (IEEE).
He has served as Editor-in-Chief for the IEEE Transactions on Information Theory, and as President of the IEEE Information Theory Society. In addition, he has received the IEEE Kobayashi Award for Computer Communication, and the Association for Computing Machinery (ACM) SIGMETRICS Achievement Award. 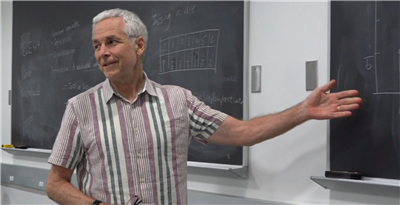 In addition to his world-renowned research, Hajek is recognized as an excellent teacher
Hajek’s work has significantly furthered the integration of computers and communication systems. His research interests include communication networks, auction theory, stochastic analysis, wireless communication, optimization, game theory and mechanism design, and mathematical biology. He is the author of the book Random Processes for Engineers and the co-author of Scholastic Processes in Engineering Systems.
Hajek has long-time appointments with the Coordinated Science Laboratory and the Center for Advanced Study and holds the N.R. Kamath Chair Professorship at the Indian Institute of Technology in Bombay.  He has held a number of leadership positions at the department, college, and university levels as well as industry, including currently serving on the Grainger College of Engineering Executive Committee.
Hajek earned the Pratt Faculty Outstanding Teacher Award in 2016 and has consistently been among those recognized on the University of Illinois’ Incomplete List of Teachers Rated as Excellent. His PhD students have gone on to distinguished careers at places like Lucent, Sirius Radio, Microsoft, Google, Qualcomm, and Texas Instruments.