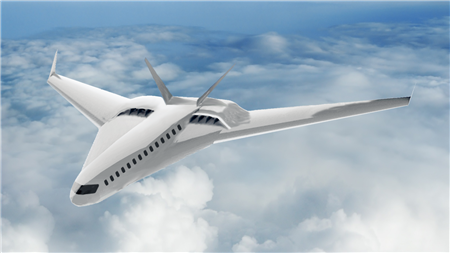 Artist’s rendering of an advanced commercial transport aircraft concept utilizing CHEETA systems.
Researchers at the University of Illinois are leading a newly funded project from NASA to develop a novel approach for all-electric aircraft.
Although improvements in vehicle configurations and engine systems have increased flight efficiency over the past few decades, the continued dependency on hydrocarbon fuels makes aircraft operation costs volatile. It also means that commercial aviation will continue to contribute a significant amount of greenhouse gas emissions across the national and international transportation industry.  And the forecast for air travel in the United States is expected to increase 90 percent within the next 20 years, leading to even greater emissions.
In an effort to address these issues, this research proposes a fundamental shift away from jet fuel towards more sustainable energy sources for aviation, and the introduction of new electrically-driven propulsion systems for commercial aircraft systems. 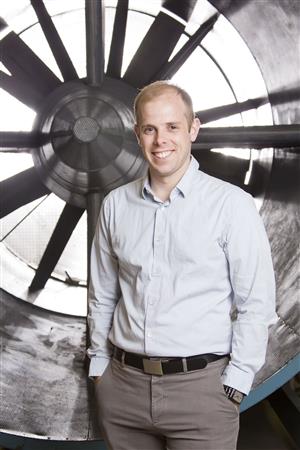 Phillip Ansel, Assistant Professor of Aerospace Engineering
It’s called CHEETA—the Center for Cryogenic High-Efficiency Electrical Technologies for Aircraft. NASA will provide $6 million over the course of three years.
“Essentially, the program focuses on the development of a fully electric aircraft platform that uses cryogenic liquid hydrogen as an energy storage method,” said Phillip Ansell, assistant professor in the Department of Aerospace Engineering at Urbana-Champaign and principal investigator for the project. “The hydrogen chemical energy is converted to electrical energy through a series of fuel cells, which drive the ultra-efficient electric propulsion system. The low temperature requirements of the hydrogen system also provide opportunities to use superconducting, or lossless, energy transmission and high-power motor systems.
“It’s similar to how MRIs work, magnetic resonance imaging,” Ansell added. “However, these necessary electrical drivetrain systems do not yet exist, and the methods for integrating electrically driven propulsion technologies into an aircraft platform have not yet been effectively established. This program seeks to address this gap and make foundational contributions in technologies that will enable fully electric aircraft of the future.”
The co-principal investigator on the project is Associate Professor Kiruba Haran in U of I’s Department of Electrical and Computer Engineering. 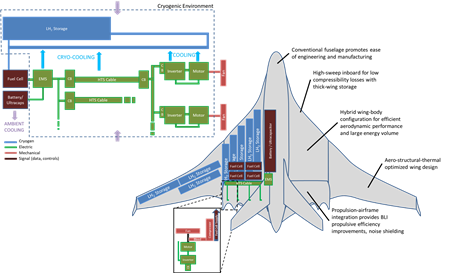 Concept sketch of a fully electric aircraft platform that uses cryogenic liquid hydrogen as an energy storage method.
“Advances in recent years on non-cryogenic machines and drives have brought electric propulsion of commercial regional jets closer to reality, but practical cryogenic systems remain the ‘holy grail’ for large aircraft because of their unmatched power density and efficiency,” Haran said. “The partnerships that have been established for this project position us well to address the significant technical hurdles that exist along this path.”
The project includes participation from eight additional institutions: the Air Force Research Laboratory, Boeing Research and Technology, General Electric Global Research, The Ohio State University, Massachusetts Institute of Technology, the University of Arkansas, the University of Dayton Research Institute, and Rensselaer Polytechnic Institute.
The other co-investigators on the team are: Assistant Professor Kai James and Associate Professor Jason Merret, both from the Department of Aerospace Engineering at U of I; Arijit Banerjee, assistant professor in the Department of Electrical and Computer Engineering at Illinois; Timothy Haugan from the Air Force Research Lab; Tina Stoia and Edward Mugica from Boeing Research and Technology; Edward Greitzer and David Hall from Massachusetts Institute of Technology; Fang Luo and Alan Mantooth from the University of Arkansas; Michael Sumption from The Ohio State University; Ernst W. Stautner from General Electric Global Research; Bang-Hung Tsao from the University of Dayton Research Institute; and Luigi Vanfretti from Rensselaer Polytechnic Institute.