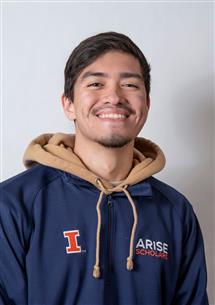 A graduate of East Aurora High School, Oscar Zepeda was more proficient in language arts than he was in math and science in high school. However, inspired by his two older sisters, who studied medicine at Aurora University, combined with a growing interest in circuits and programming, he decided to pursue a career in systems engineering.
“Part of it was me trying to round myself out,” Oscar admitted on pursuing a subject that wasn’t necessarily his strong suit. “I wanted to push myself to be better.”
Oscar was accepted to the University of Illinois, but not immediately into engineering, instead to the Department of General Studies. As part of DGS, he could apply to the College of Engineering after two years, but there was no guarantee of admittance.
However, everything fell into place for Oscar after he was offered an opportunity to enroll in ARISE. The program, coordinated by the College of Engineering, gives a select group of students from under-resourced backgrounds in the State of Illinois an extra year to get ready for traditional freshman-year courses. Successful completion of the first year of the program guaranteed Oscar admittance into the College of Engineering. Through financial aid, the program guarantees ARISE students that five years of college will cost them the same as four.
“ARISE opened this door as if to say we see the potential in you,” Oscar said. “My mom told me that these opportunities only come around once in a lifetime.”
Oscar took the offer. He likes the fact that ARISE gave him a foundation year to take some of his general education courses while also providing a network of students and advisors to support him.
“By taking five years to complete a degree that is typically done in four, I am able to start slowly,” Oscar said. “Coming into college, I still felt like I had a lot of growth to do. ARISE played a big hand in helping me prepare for these next four years.”
Oscar chose systems engineering because of its breadth and because he wanted to be an integral part of a team. The fact that he is bilingual gives him a leg up as well.
“As a systems engineering, I’m the glue to the team,” he said. “I’m in the middle, working with everyone from programmers to electrical engineers to business people.”
He also notes that ARISE allows him an extra year to take advantage of more opportunities. Now in his second year at Illinois, he is not only enrolled in the Industrial and Enterprise Systems Engineering program, he has also studied abroad in both Bolivia and Guatemala and is one of three ARISE students selected for an internship this summer with Amazon Lab126 in Sunnyvale, California.
“I’m still amazed how things were able to work out with the Amazon internship,” Oscar said. “I feel like it will open a lot of doors. They always say that landing the first internship is the hardest one. Amazon doesn’t typically offer this kind of opportunity to sophomores.”
Oscar can’t imagine what path he would have taken were ARISE not been an option for him.
“ARISE is the reason I’m here and able to do all of things,” he said. “They have given me so many connections already. I can’t begin to thank everyone involved with ARISE for all of these opportunities. It still blows my mind.”