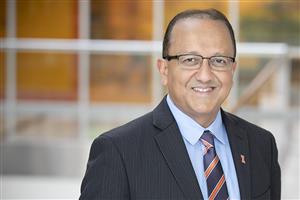 Rashid Bashir, Dean of the University of Illinois College of Engineering and Grainger Distinguished Chair in Engineering, has been named a National Academy of Inventors Fellow (Full list of 2018 Class). The NAI Fellows Program highlights academic inventors who have demonstrated a prolific spirit of innovation in creating or facilitating outstanding inventions that have made a tangible impact on quality of life, economic development, and the welfare of society. This year’s honorees will be formally inducted on April 11, 2019 at Space Center Houston.

A nationally and internationally recognized scholar, his research interests include biomedical microelectricomechanical systems (BioMEMS), Lab on a chip, nano-biotechnology, interfacing biology and engineering from molecular to tissue scale, and applications of semiconductor fabrication to biology, all applied to solve biomedical problems.

He also has been involved in three startups that have licensed his technologies – BioVitesse, Inc., which developed automated in-process quality control monitoring systems and solutions for rapid bacteria detection and identification; Daktari Diagnostics, whose broad-based blood testing platform enables more immediate treatment; and Prenosis, which is growing the first patient dataset that combines critical time series biomarker data with existing clinical data. He is a prolific author with more than 250 journal publications and a proven innovator with more than 45 patents.

Bashir joined the Illinois faculty as a professor of electrical and computer engineering and bioengineering in 2007. He has held a number of key administrative roles including serving as the director of the Micro and Nanotechnology Laboratory, head of the Department of Bioengineering, and executive associate dean and chief diversity officer of the Carle Illinois College of Medicine.

He played an integral role in the conceptual development and planning of the engineering-based Carle Illinois College of Medicine. He co-led the formation of the ongoing campus-wide Mayo-Illinois Alliance with the Mayo Clinic around individualized medicine, cancer and computational genomics. He also led the formation of the Health Care Engineering Systems Center (HCESC) at Illinois and the Jump Applied Research for Community Health through Engineering and Simulation (ARCHES) partnership with OSF HealthCare in Peoria.

In addition to NAI, he is a Fellow of the American Association for Advancement of Science (AAAS), the American Institute of Medical and Biological Engineering (AIMBE), the American Physical Society (APS), and the Institute of Electrical and Electronics Engineers (IEEE), and a few others professional societies.

For more information on this story or for additional College of Engineering Inquiries, contact Mike Koon, Marketing and Communications Coordinator, by phone (217-244-1256) or email (mkoon@illinois.edu).