This is one in a series of features on competitors in the 2018 Cozad New Venture competition, a program sponsored by the University of Illinois' Technology Entrepreneur Center that is designed to encourage students to create new businesses. The competition process offers teams assistance in the form of: mentors to help guide them through the phases of venture creation, workshops to help with idea validation, pitching skills, and customer development, and courses to enhance their skills and knowledge. Teams who make it to the final round of competition will have the opportunity to meet with venture capitalists, early stage investors and successful entrepreneurs who serve as judges. The judges will determine teams that will present their ventures at the finals event. The teams are competing for nearly $200,000 in funding and in-kind prizes.

Visit a store’s garden section and chances are you’ll find an array of garden hose wands offering various sizes but with few design options. Tommy Suppes, a sophomore in engineering physics, hopes his innovative approach to this garden staple will one day make watering plants and flowers more efficient.

“When it’s 90 degrees in the summer, the last thing I want to do is water my garden for 20-to-30-minutes,” Suppes said. “I was thinking of ways to make that process faster and be more effective.” 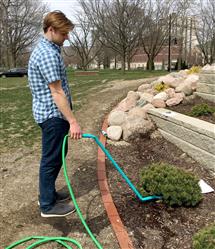 Suppes, who started GoGo Garden Tools to improve the needs of gardeners like himself, is competing in the Cozad New Venture Competition where he hopes his prototype will garner a win when it concludes on April 25 with the final round.

Currently Suppes is focused on perfecting his garden hose wand with the help of Computer Aided Design (CAD) to generate 3D representations for his product, which encompasses a plant’s base using a U-shaped head. The shape offers uniform watering and targets roots instead of flower petals, which can get knocked down from water pressure.

He also owns a 3D printer to help him experiment with different hole sizes for the wand head.

The longer wand boasts an upwards, curved shaft and doubles as a measuring tool with a meter stick painted on it. The design also requires less bending or kneeling for older gardeners.

“I’m trying to incorporate as many features as I can,” he said.

For Suppes, gardening is a family affair. Both his mother and grandmother are avid gardeners, and he and his younger brother, Grant, have been cutting grass for clients since their elementary school days. The siblings even run their own landscape company called Eagle Landscaping.

“My brother and I are both Eagle Scouts and enjoy being outdoors,” he said, whose GoGo Garden Tools teammates happen to include Grant and their sister, Meagan.

While Grant finishes his senior year at Barrington High School, Meagan, a recent graduate of University of Illinois’ accountancy program, prepares to study for her master’s degree at Illinois next fall. All three siblings will be students at Illinois then with Grant studying with a focus on landscape architecture.

“It’s going to be a blast to study with him at Illinois next year,” said Grant about his brother.

As Suppes looks towards summer to try out his wand heads and Grant finishes high school, Meagan is using her accounting skills to help her entrepreneurial brother.

“As the project progresses, I will assist him more with the accounting and finance side of the business, such as budgeting, finding a cost-effective way to mass produce the product and keeping in touch with investors,” she said.

Meagan, who said she has learned a lot about the design and implementation of a product, is also working on obtaining a patent for GoGo Garden Tools.

Like his older brother, Grant is hoping Cozad will lead to greater opportunities in the business world.

“With my current landscaping company, it will be a big help to customers that we invented things that might someday be big,” he said. “That could get us another foot in the door and to be a selling point for a job.”

Whether Suppes becomes a Cozad winner, one thing is certain: he plans to start a manufacturing company with a focus on serving the needs of gardeners. As the IP Clinic on campus helps him obtain a trademark for his company’s name, he continues to work on ideas for his first prototype.

“I think I can get a plastic injection mold for the head; I would need a trigger, but I haven’t developed that yet,” he said.

If Suppes owns a manufacturing company one day, it will not be a surprise to Meagan.

“Both of our grandfathers and our father started their own businesses, and we have seen firsthand the amount of time it takes to run a family-owned business,” she said.

For more information on this story or for College of Engineering media inquiries, contact Heather Coit, Media Communications Specialist. hcc@illinois.edu