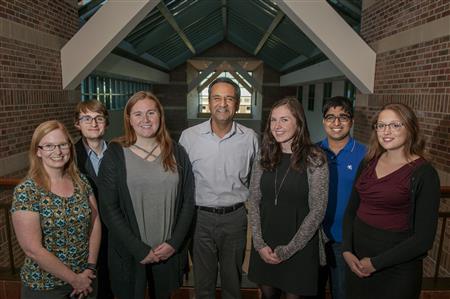 Cancer Scholars director Rohit Bhargava (center) joins program advisor Marcia Pool (far left) and a few of the first cohort of undergraduate students Pierce Hadley, Lauren Sargeant, Madelyn O’Gorman, Sreyesh Satpathy, and Miranda Dawson outside Bhargava’s office at Beckman Institute.
The College of Engineering started a bold experiment in undergraduate education using a “challenge-inspired” education model and piloted the first ever Cancer Scholars program in 2014. The idea was to form a small cohort of students, which would mold their undergraduate experience around the idea of cancer research.

Three years later, the first cohort are now seniors. Through a number of hands-on research opportunities, a few special classes, and peers to share and grow in their understanding, they are uniquely prepared to tackle one of the great challenges of our time.

Rohit Bhargava, the Director of the Cancer Center at Illinois and a professor of bioengineering at the University of Illinois, led the team implementing this program. He is also an educator and has inspired students through some sweeping changes to curriculum and approach to the student experience.

“When students seek to learn on their own and augment that wish with what we are able to do in the classroom, this makes our educational program stronger,” Bhargava contends. “Cancer scholars is very interesting for two reasons: First, the nature of cancer research and the needs of cancer care inspire a new kind of education that seeks to solve problems. The second motivation lies purely in engineering. Today’s student has more choices than ever and the distractions and opportunities to learn are more than ever. To focus their attention on hard-core technical topics that are very difficult to convey, we came up with this idea of inspiring them with a challenge.”

For the most part, the cancer scholars took the same courses as other students in bioengineering, but there was an additional overlay of experiences where these students took what they learned and contemplated how this knowledge could relate to cancer research. To aid them in this focus, the educational team developed targeted including “Frontiers in Cancer Research” and “Healthcare Innovation by Engineering.” They were matched with undergraduate research opportunities starting as early as their freshman year. The group also got a head start on senior design projects and had a variety of internship opportunities with a focus on cancer.

“The first semester is all about knowledge that cancer is something that engineers can contribute to,” said Bhargava of the program’s design. “We slowly build up their research experience by putting students into cancer researcher’s labs, leading them through common exercises and so forth. At the same time, we give them very strategic courses and relate their classic education to cancer research and how programs can come together to impact patients at the end of the day.”

“Because this program got me thinking early on, it pushed me to try opportunities I would have never thought to do otherwise,” reflected Miranda Dawson. “I applied to be an intern at the National Cancer Institute. I also worked with a lot of people internationally, which led to a desire to have a more international focus with my career.”

Madelyn O’Gorman spent the last two summers at Mayo Clinic working on a number projects involving melanoma. She helped in developing a therapeutic that could prevent metastatic melanoma long term and on a melanoma diagnostic using quantitative genetic testing.

“I was at the interface of the patients and I saw the translational side of bioengineering with an emphasis on cancer,” O’Gorman said. “I don’t think I would have had this opportunity without the Cancer Scholars program. I had Dr. Bhargava’s support and recommendations all through this. I think it has helped me be successful.”

“When I came here we were really thrown into the deep end, having to read research articles and talking with professors about their research,” added Pierce Hadley. “I’ve gained a lot of confidence in the area just from the program and the opportunities that have come with it.”

“Cancer Scholars has given me a lot of experience in research, but also in understanding mentorship as well,” Hadley said. “One of the great things about being one of the older students now is thinking about how we can improve this program and give the younger classes even more opportunities than we had.”

Part of the motivation to start the Cancer Scholars program when he did was the fact that much has changed in science and technology even over the last decade that Bhargava believes makes it conducive to bringing cancer even more to the forefront.

“Now is the time for cancer,” Bhargava said. “We have a very large handle on the biology side and how it might progress and successes in basic science that give us hope. In addition, the technology has reached a high level compared to a decade ago. The ability to measure images, and store and analyze data is unprecedented, so I do believe the capabilities are ubiquitous almost. Now we can think of a different way of tackling cancer, not just traditional biology, but also with new kinds of tools – with data and analytics and real-time monitoring with devices to see if we can better understand cancer progression and control it.”

The Cancer Scholars program is just one way the University of Illinois in doubling down on its commitment to be a leader in cancer research in the 21st century.

In July, the University opened the Cancer Center at Illinois, an interdisciplinary collaborative center directed by Bhargava, which brings together more than 100 faculty members plus graduate students and postdoctoral researchers from across campus to pursue cancer-related research. In the fall of 2018, the University will pioneer the first of its kind engineering-based College of Medicine by receiving its first class of students. These are exciting new opportunities for students to train in engineering and engineering-inspired medicine.

Although they will pursue a variety of career paths, the first cohort of Cancer Scholars believes their experiences have given them a leg up. Hadley will be applying to MD/PhD programs with aspirations to become a practicing physician while also running a research lab focused on 3D printing and tissue engineering technologies.

Dawson plans to attend graduate school while also applying for a Fulbright Scholarship to understand the biological dynamics of native Swedes and refugees in Stockholm.

“I realized I liked the translational side of bioengineering where you take groundbreaking therapy take it to clinical trials,” said O’Gorman. “Therefore, I’m thinking about working for a smaller pharmaceutical company for a couple of years then maybe going back to grad school.”

Bhargava said the Cancer Scholars program has exceeded even his expectations.

“The best word that I can find is inspired,” he said “Kudos to the first group. The results have been far beyond what any of us would have expected. What we thought we were doing was inspiring individual students to achieve at a high level. That has certainly happened with the number of papers published and conferences attended just one benchmark. What we had not anticipated, however, was how much influence they would have as a group. They all rose to a higher standard than they otherwise would have on their own and raised the bar of education for all of our students.”

For additional information on this story or for additional College of Engineering media inquiries, contact Mike Koon, marketing and communications coordinator, 217-244-1256