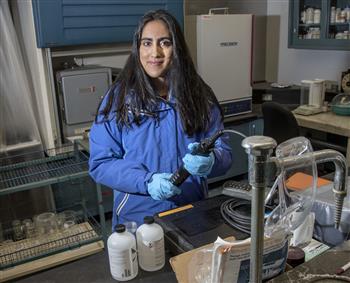 Nina Kshetry used AWARE to jumpstart her company, Ensaras, which develops analytical tools for wastewater treatment plant operations.
Nina Kshetry admits she always had “the entrepreneurial bug.” A decade after reaching the semifinal round of the 2006 MIT $100,000 Entrepreneurship Competition, she was finally ready to move forward with her company Ensaras, Inc., a Champaign-based startup that develops predictive analytics and artificial intelligence tools and devices to optimize wastewater treatment plant operations.

To get started, Kshetry needed a way to not just receive funding, but get connected to other entrepreneurs and she found that with AWARE (Advancing Women and Underrepresented Entrepreneurs). The program, sponsored by the Technology Entrepreneur Center and the University of Illinois Research Park, is now in its third year and targets support for women and underrepresented groups in an effort to bring them into the vibrant entrepreneurial ecosystem at Illinois. It has also become a model that other universities have adopted. Kshetry is just one of a number of success stories for AWARE, which was kick started in 2015 by a $100,000 grant from the National Science Foundation.

Through programs like the Cozad New Venture Competition; collaborative space like the Enterprise Works incubator, or through advising, which has guided startups in successfully raising millions of dollars in seed funding, the University has been intentional in building a community and providing student and faculty startups the tools necessary to turn developed technology into commercialization.

Despite these efforts, leaders within the ecosystem recognize the additional challenges that women and members of underrepresented groups have in even becoming a part of that community.

“Part of it is simply having people who look like you in environments where you feel like you can succeed,” said Laura Bleill, Associate Director of the Illinois Research Park. “That’s a simple concept that I think people are starting to understand.”

To address these issues, Bleill and Jed Taylor, the Director of Operations for the Technology Entrepreneur Center on campus, were co-principal investigators on the NSF proposal for AWARE.

“I do find that there are people who are resistant simply because it wasn’t their pathway,” Bleill said. “Perhaps they set out to get a PhD and then settle into a faculty position, but the entrepreneurial bug on this campus has a way of infecting people who don’t necessarily set out down that path.”

The ultimate goal is integration. As Bleill and her team were investigating elsewhere for ideas, they discovered that many programs have special workshops just for women or underrepresented groups, but those individuals still often feel isolated.

“Our goal is to very much put some effort and intentionality around funneling people into the existing ecosystem and really affect change in the culture of the ecosystem in a way that we can impact,” Bleill said. “We did that through a little bit of social engineering, but also a little bit of extra opportunity and resources. We want to understand the impediments, challenges and resistance of some people that are clearly well qualified and have the ability and the interest in moving forward with something entrepreneurial.” 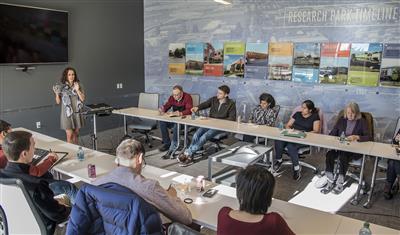 Through AWARE, successful female entrepreneurs like Jackie DiMonte, speak to those at the beginning stages of the process.
Jesus Soriano, NSF program director, was aware of some of the existing success Illinois had in attracting underrepresented groups through the local I-Corps program, where Taylor and Bleill, and others were heavily involved, and encouraged them to apply for the grant. I-Corps, an NSF-funded program, prepares scientists and engineers to extend their focus beyond the university laboratory, and accelerates the economic and societal benefits of NSF-funded, basic-research projects that are ready to move toward commercialization.

A major objective of AWARE is to provide a bridge to I-Corps. According to Taylor, that is done through three avenues. The first is to encourage women to attend workshops or other networking events with successful female entrepreneurs. Secondly, it is to provide up to $5,000 in proof-of-concept funding to help them develop a viable product. The third piece is to foster female Entrepreneur-in-Residences, which offers one-on-one support.

Quite simply AWARE meets prospective female entrepreneurs where they are. For instance, in many case there are challenges as it relates to caregiving responsibilities while also being the primary breadwinner for the family.

“Those are issues that frankly are a reality,” Bleill said. “These are more strenuous for women than they are for men in many cases and so we take those into consideration. These considerations are important, for instance, when we decide when to plan events and when to ask them to meet with their Entrepreneurs-in-Residence”

While Bleill admits that the “needle is moving” in the right direction, she admits that AWARE has a lot of room to grow.

“I would like to have a much more prescribed pathway for AWARE,” Bleill said. “We would like to market to specific people we think would be interested, be much more prescriptive of the programming we offer, and have more resources for not only proof-of concept awards, but also for sending people to training or conferences.”

In just over two years, AWARE has produced tangible results. Its participants have successfully applied for grants through I-Corps and its successor SBIR (Small Business Innovation Research).

Ensaras, for example is currently working on a Department of Defense SBIR Phase 1 project to develop an automatic wastewater classification device for the U.S. Army using smart sensors. They are also actively marketing their advanced analytics solutions to municipal and industrial wastewater clients.

For more information about this program for additional College of Enginering media inquiries, contact Mike Koon, Marketing and Communications Coordinator, 217-244-1256