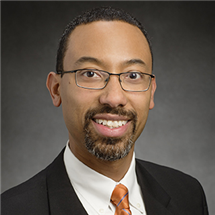 Andrew Alleyne, the Ralph and Catherine Fisher Professor of Mechanical Science and Engineering (MechSE), has been named a recipient of the 2017 Advocating for Women in Engineering Award. The award is presented by the Society of Women Engineers (SWE) and honors individuals who have demonstrated professional excellence in their chosen STEM fields and have proven to be advocates of women in engineering and SWE’s objectives. He will officially be recognized on Oct. 27 at the Awards Banquet at the WE17 Conference, the world’s largest conference for women engineers, in Austin, Texas.

Alleyne joined the faculty in 2004 and served on the MechSE Faculty Recruiting Committee from 2006-11 and again from 2012-14, all but the first two years as the Committee Chair. In the year prior to his assuming the leadership of the Recruiting Committee, 218 of 235 full professors in the College (93 percent), and 47 of the 51 total faculty members in MechSE (92 percent) were men.

Through his involvement on the committee, he has played a big role in a dramatic shift in the gender composition. For instance, in 2014, exactly half of new faculty members hired across the College (23 of 46), and 90 percent of the hires in MechSE were women. Today nearly 25 percent of the faculty in that department are women. That has translated into an increased number of female students, going from 12 percent in MechSE in 2008 to 28 percent in 2016.

In explaining Alleyne’s role in helping the College change the paradigm, Andreas Cangellaris, Dean of the College of Engineering, said, “He believed that we could change the culture through the hiring process and, at the same time, maintain, and in fact improve, the quality of our faculty. He was right.”

In addition to positively affecting the hiring process, Alleyne serves as a mentor for several female faculty members, making sure they have what they need for their labs, are seeking and receiving young investigator awards from the National Science Foundation and other agencies, and attaining promotion and tenure. In addition, several of his female graduate students have gone on to successful careers both in academia and in the corporate world.

Alleyne is also a frequent invited speaker at other institutions, where he advocates for methods to increase numbers of female faculty and students in STEM related fields.

Alleyne is the principal investigator of the $18.5 million National Science Foundation Engineering Research Center for Power Optimization of Electro-Thermal Systems (POETS), which is tackling the thermal and electrical challenges surrounding high power density for electrified mobile systems.  As a multi-disciplinary center, POETS coordinates the efforts of students and faculty across four departments in the College of Engineering: Mechanical Science and Engineering, Industrial and Enterprise Systems Engineering, Electrical and Computer Engineering, and Materials Science and Engineering.

Alleyne, who holds a PhD from the University of California-Berkeley, has received numerous research awards, including a Fulbright and a National Research Council Fellowship. As an instructor, he has regularly been ranked excellent (in the top 10% of instructors), and his former graduate students have created an endowment fund in his honor in the MechSE department.

The Society of Women Engineers (SWE), founded in 1950, is the world's largest advocate and catalyst for change for women in engineering and technology. The not-for-profit educational and service organization is the driving force that establishes engineering as a highly desirable career aspiration for women.

For more information on this story or for other College of Engineering meida inquiries, contact Mike Koon, Marketing and Communications Coordinator, 217-244-1256