"Fizzy" soda water could be key in clean and sustainable manufacture of "flat" wonder material: graphene

"Fizzy" soda water could be key in clean and sustainable manufacture of "flat" wonder material: graphene 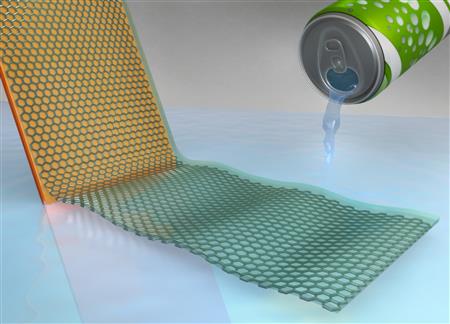 Using only soda water (carbonic acid) as the electrolyte, chemical vapor deposition synthesized graphene is easily transferred via under-etching delamination, allowing for multiple reuse of the metal catalyst substrate.
Whether you call it effervescent, fizzy, or sparkling, carbonated water is making a comeback as a beverage. Aside from quenching thirst, researchers at the University of Illinois at Urbana-Champaign have discovered a new use for these “bubbly” concoctions that will have major impact on the manufacturer of the world’s thinnest, flattest, and one most useful materials — graphene.

As graphene’s popularity grows as an advanced “wonder” material, the speed and quality at which it can be manufactured will be paramount. With that in mind, the research group of SungWoo Nam, assistant professor of mechanical science and engineering at Illinois, has developed a cleaner and more environmentally friendly method to isolate graphene using carbon dioxide (CO2) in the form of carbonic acid as the electrolyte solution. The findings are published in the most recent Journal of Materials Chemistry C.

Nam, an expert in the area of 2D materials, is especially interested in graphene for its use in sensors or flexible devices — for instance, a wearable patch that, when placed directly on skin, is so thin and transparent, it isn’t noticeable. Nam currently has projects with industry for making wearable graphene sensors.

Graphene is synthesized by using chemical vapor deposition onto a metal substrate, typically copper foil. One particularly tricky aspect of producing graphene is how to separate this atomically thin material from its native metal substrate for integration into useful devices. This typically involves either dissolving away the high-purity metal or delaminating it from the substrate - which require the use of harsh chemicals that leave stubborn residue. The ultra-thin graphene also needs to be coated with a polymer support layer such as polycarbonate or PMMA (poly methyl methacrylate), which requires the use of often toxic and carcinogenic solvents.

“In our case, we are using a bio-mass derived polymer, ethyl cellulose, for the coating,” said Michael Cai Wang, Nam’s PhD student and lead researcher on the project. “A common and inexpensive polymer often used as a food additive, ethyl cellulose is solvated in just ethanol. This not only makes our graphene transfer process more environmentally friendly, it is now also compatible with a variety of polymeric and soft biological materials such as common plastics and hydrogels that would otherwise not tolerate harsh solvents.”

“After you transfer the graphene, the carbonic acid simply evaporates away as carbon dioxide and water, which doesn’t require any further rinsing,” Nam noted. “We’re thus saving both water and time by eliminating the conventional need for the repetitive and tedious rinsing process. In using electrolytes such as NaOH or NaCl, for example, the sodium tends to remain on the graphene, which is very difficult to completely get rid of.”

“By delaminating the graphene off from the copper foil using carbonic acid, we are also able to reuse the growth substrate multiple times instead of expending it, realizing significant material and cost savings” Wang said. 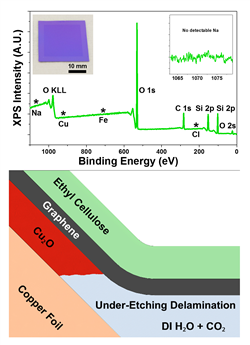 In combination with ethanol solvated ethyl cellulose as the scaffold polymer, this transfer process is free of harsh chemicals typically used in existing techniques. Since the carbonic acid simply evaporates away as carbon dioxide and pure water, this method enables ultra clean graphene integration and compatibility with a wide variety of polymeric and soft materials
“I think scientifically what we are bringing to the community is to really motivate people to think about a cleaner way for making graphene,” Nam said. “We are trying to improve upon the well-established protocols so that industry can easily adopt our techniques. Because a lot of devices are contaminated by these previously used chemicals, it inevitably affects the property of graphene.”

“Graphene is just starting to mature from the laboratory and into commercial applications,” Wang said. “Once you start large-scale manufacturing, workers’ health is also a major consideration, another benefit of our greener process.”

In addition to making our favorite cup of decaf or glass of champagne, the group also hopes the scientific community might take this as inspiration to find novel ways to utilize otherwise nuisance CO2 for practical applications. They envision extending the useful life cycle of carbon in the industrial ecosystem while diverting and mitigating its emission into the atmosphere. While ocean acidification is an undesirable consequence of the ever-increasing carbon dioxide concentration in the Earth’s atmosphere, the research team took this as an inspiration to harnessing this very same mechanism to sustainably manufacture this new “wonder” material.

Nam also believes this method can have an impact on not just the production of graphene, but also provide a green and affordable technique to use for etching and delamination processing of other materials as well.

“If you are interested in making the best transistor in the world, you have to have the cleanest, purest material that you can synthesize and transfer,” he concluded. “Here we provide that opportunity to the community. In addition, a lot of people are trying to measure the intrinsic properties of other materials as well. Our approach will help them do that.”

In addition to Nam and Wang, Widianto Moestopo, Satoshi Takekuma, Shama Barna, and Richard Haasch were coauthors of this study. The National Science Foundation (NSF), the Air Force Office for Scientific Research (AFOSR), the NASA’s Space Technology Research Grants Program, and the Natural Sciences and Engineering Research Council of Canada (NSERC), provided funding for this research.

For more information on this article or for other College of Engineering media inquiries, contact Mike Koon, Marketing and Communications  Coordinator, 217-244-1256