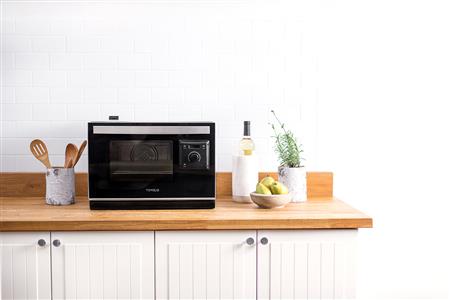 The Tovala Smart Oven sells for $399 and is about the size of a large microwave.
Americans are constantly on the go. Oftentimes because of a long workday and perhaps activities in the evening, eating right takes a back seat. Answering the quest for healthy food made quickly are the makers of the Tovala Smart Oven.

Tovala, co-founded by a University of Illinois graduate with a PhD in mechanical engineering (Bryan Wilcox) and an MBA graduate of the University of Chicago’s Booth School (David Rabie), officially launches its smart oven to the public July 11 after several rounds of seed funding and months of Beta testing.

What makes it smart? Meals are freshly prepared and shipped to the customer. The oven scans the bar code on the packaging and downloads the heating instructions automatically from the Internet. It can then bake, broil, steam, or any combination the recipe calls for and have the meal ready to go in around 20 minutes.

Customers can purchase the oven for $399 from the Tovala website and for $36 per week (or $72 for a double portion) subscribe to have three meals shipped each week. The team has about 75 meals on its menu and will give customers a choice of five each week to choose from. Orders received by Sunday will be shipped by the following Monday. Among the staff favorites are Cajun chicken breast, tofu veggie stir-fry, Thai turkey meatballs, and miso glazed salmon. 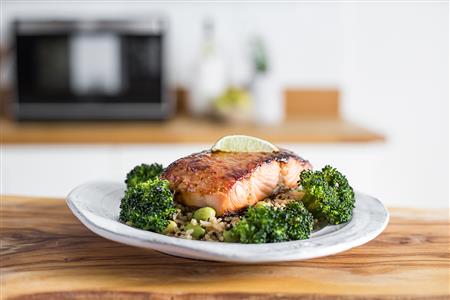 One of the most popular Tovala meals is mizo-glazed salmon.
“There’s something magnetic about that concept of having something very easy, very tasty and home cooked,” said Peter Fiflis, the lead engineer with a PhD in nuclear, plasma and radiological engineering from Illinois. “We have found time and again that even those who come in as skeptics are completely sold after they try it. The biggest validation has been to have people continue to buy meals. The feedback so far is almost universal, that the food has been incredible.”

In addition to preparing the shipped meals, Tovala allows customers to program their own cook cycles for meals they prepare and even provides an app for several pre-set cycles. Fiflis notes that, for example, reheated pizza from the Tovala tastes just as good as it did when it came out of the box.

The road to launch began in 2015, when the startup, then called Maestro, claimed first prize in the University of Chicago’s prestigious New Venture Challenge. That same year Fiflis led a team called Breakfast Box, in The Cozad New Venture competition sponsored by the University of Illinois’ Technology Entrepreneur Center. Fiflis’ team had a similar idea – create an oven that can be programmed to have breakfast ready at a specific time.

Mark Tebbe, a University of Illinois graduate in computer science and an adjunct professor of entrepreneurship at the University of Chicago, judged both events and suggested Fiflis meet the Maestro team. As a result of the meeting, Fiflis joined Maestro, and together they built the company and changed the name to Tovala, which combines the Hebrew word for good, “tov,” and the Italian word for table, “tavola.”

In January 2016, Tovala announced $500,000 in seed funding and later that spring successfully completed a $250,000 Kickstarter campaign. As a result, Tovala shipped the ovens to the around 1,000 backers and began offering meals to them. They hired Alexander Plotkin as its chief culinary officer. Plotkin has a background in some of the most respected restaurants around the globe, including Noma in Copenhagen, which was voted Restaurant Magazine’s “Best Restaurant in the World” four times since 2010.

“We’re really excited,” Fiflis added. “It’s been a long build, from a three-compartment model that was more a contraption to more of a sleek, streamlined device. Right now we are shipping you the most popular meals. As we grow to know our customers, we will be able, much like Amazon, to offer even smarter choices for each based on their purchase history.”