Reflecting the structure of composites found in nature and the ancient world, researchers at the University of Illinois at Urbana-Champaign have synthesized thin carbon nanotube (CNT) textiles, that exhibit both high electrical conductivity and a level of toughness that is about fifty times higher than copper films, currently used in electronics. 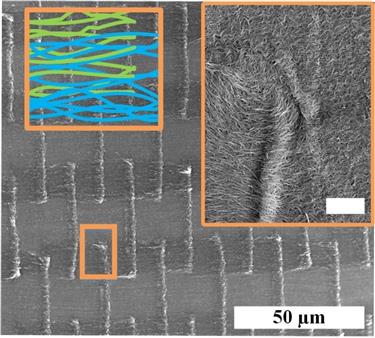 Scanning Electron Microscope Images of architectured carbon nanotube (CNT) textile made at Illinois. Colored schematic shows the architecture of self-weaved CNTs, and the inset shows a high resolution SEM of the inter-diffusion of CNT among the different patches due to capillary splicing.
“The structural robustness of thin metal films has significant importance for the reliable operation of smart skin and flexible electronics including biological and structural health monitoring sensors,” explained Sameh Tawfick, an assistant professor of mechanical science and engineering at Illinois. “Aligned carbon nanotube sheets are suitable for a wide range of application spanning the micro- to the macro-scales including Micro-Electro-Mechanical Systems (MEMS), supercapacitor electrodes, electrical cables, artificial muscles, and multi-functional composites.

Carbon nanotubes, which have been around since the early nineties, have been hailed as a “wonder material” for numerous nanotechnology applications, and rightly so. These tiny cylindrical structures made from wrapped graphene sheets have diameter of a few nanometers—about 1000 times thinner than a human hair, yet, a single carbon nanotube is stronger than steel and carbon fibers, more conductive than copper, and lighter than aluminum.

However, it has proven really difficult to construct materials, such as fabrics or films that demonstrate these properties on centimeter or meter scales. The challenge stems from the difficulty of assembling and weaving CNTs since they are so small, and their geometry is very hard to control.

Beginning with catalyst deposited on a silicon oxide substrate, vertically aligned carbon nanotubes were synthesized via chemical vapor deposition in the form of parallel lines of 5 µm width, 10 μm length, and 20–60 μm heights. 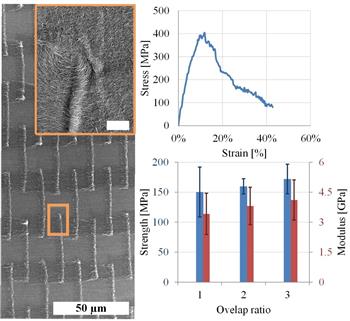 Example of stress-strain curve resulting from mechanical testing of carbon nanotube textile. The bottom chart shows the ability of the researchers to tune the mechanical behavior, namely strength (maximum force to breakage) and modulus (resistance to stretching) by varying the textile architecture.
“The staggered catalyst pattern is inspired by the brick and mortar design motif commonly seen in tough natural materials such as bone, nacre, the glass sea sponge, and bamboo,” Liang added. “Looking for ways to staple the CNTs together, we were inspired by the splicing process developed by ancient Egyptians 5,000 years ago to make linen textiles. We tried several mechanical approaches including micro-rolling and simple mechanical compression to simultaneously re-orient the nanotubes, then, finally, we used the self-driven capillary forces to staple the CNTs together.”

“This work combines careful synthesis, and delicate experimentation and modeling,” Tawfick said. “Flexible electronics are subject to repeated bending and stretching, which could cause their mechanical failure. This new CNT textile, with simple flexible encapsulation in an elastomer matrix, can be used in smart textiles, smart skins, and a variety of flexible electronics. Owing to their extremely high toughness, they represent an attractive material, which can replace thin metal films to enhance device reliability.”

In addition to Liang and Tawfick, co-authors include David Sias and Ping Ju Chen.