Through PhantomCor, doctors will be able to create a 3D model of your heart

Through PhantomCor, doctors will be able to create a 3D model of your heart

This is one in a series of features on competitors in the 2017 Cozad New Venture competition, a program sponsored by the University of Illinois' Technology Entrepreneur Center that is designed to encourage students to create new businesses. The competition process offers teams assistance in the form of: mentors to help guide them through the phases of venture creation, workshops to help with idea validation, pitching skills, and customer development, and courses to enhance their skills and knowledge. Teams who make it to the final round of competition will have the opportunity to meet with venture capitalists, early stage investors and successful entrepreneurs who serve as judges. The judges will determine teams that will present their ventures at the finals event. Last year, these teams competed for nearly $220,000 in funding and in-kind prizes.For most patients, doctors use an echocardiogram (EKG) to further investigate and ultimately determine what is going on with your heart. Soon they may be able to use a 3D replica of your actual heart to more accurately make a diagnosis. 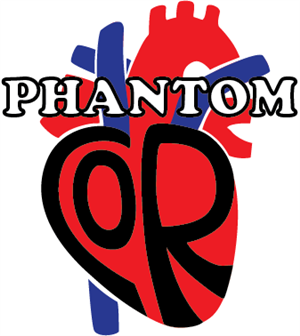 Researchers at the University of Illinois’ Beckman Institute and the Department of Bioengineering are creating a “phantom” heart that will not only be able to be used in the diagnosis, but to also to prepare the surgeon for an operation or in medical school training for aspiring cardiologists.

The technology, championed by professors Wawrzyniec Dobrucki and Brad Sutton, is being further developed by student startup, PhantomCor, a finalist in the Cozad New Venture Challenge. The students demonstrated a portion of the technology at this spring’s Engineering Open House, where they were able take a person’s pulse and translate the exact heartbeat to a phantom heart.

Although heart phantoms exist, what will enable the technology created by PhantomCor to do much more is its ability to achieve better standardization and its capacity to work with different image modalities, says its co-founder Hiba Shahid, a junior bioengineering major at Illinois and a research associate at Carle Foundation Hospital.  Typically the phantom only works with an ultrasound or MRI and is static.

“The closer we can get to a dynamic moving heart, the better the images and the better the quantitative data,” Shahid said. “This will lead to more personalized medicine and improved therapeutics.”

It’s the combination of a CT Scan, which takes a picture of the heart itself, and the EKG, the recording of the heart’s electronic activities that help in replicating a unique heart. The computerized reading can be then transferred to a 3D printer, which fabricates the heart out of hydrogel or silicon.

“The hope is that once it's fully developed, instead of just being used for calibration of imaging modalities, the doctors can use it for patient diagnosis or to train future cardiologists,” Shahid said.

Another common method for determining the strength and health of a heart from a patient suspected of having a heart attack is to have that patient undergo a stress test using a treadmill. This has the potential side affect of putting more strain on a person’s heart. Using the PhantomCor technology, the physician can instead simulate the test on the beating phantom heart in determining the treatment protocol.

“A heart attack is just a blanket term that people typically use,” Shahid noted. “There are literally hundreds of treatment protocols that a doctor can use, so this will make that process easier in the long run. “ 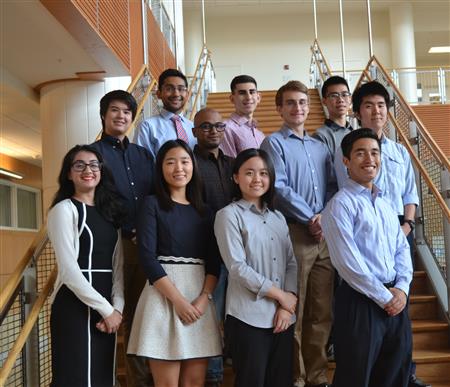 The current team is composed of Joshua Au, Viraat Goel, Pierce Hadley, Alex Hasnain, Boeun Hwang, Bara Saadah, Hiba Shahid, Linsun Sunny, Teresa Yang and Hugh Yeh.
There are three components to the PhantomCor technology – the electrical system (voltage source and Arduino), the mechanical system that drives the pump, and the heart itself. Eventually, they will be able to incorporate anatomical features specific to the patient, even using UV light to harden certain areas to simulate dead tissue.

Because silicon is biocompatible and similar to human tissue, it can be used in all three imaging modalities, MRI, CT, and ultrasound, doing so with a higher resolution than its predecessors.

Through a photoplethysmogram (PPG), the team can determine the pressure of the arteries in the chamber and accurately determine the increase and decrease in volume of blood flowing through the heart. On the back end they are building an electrical signals “library” which will be used to compare the condition of the phantom heart to the characteristics of someone with a certain heart condition. In testing, they are comparing the condition actually being portrayed by the phantom with those abnormalities.

According Shahid, using 3D printing for pre-surgical analysis is not entirely new, but the ability to replicate the condition of the heart not only anatomically, but also functionally is revolutionary. To that end, she and her team has had discussions with researchers at the Jump Simulation Center in Peoria, who leads that technology in the Midwest and with cardiologists at Carle Hospital to refine the process.

From a research standpoint, using the phantom heart could in many cases replace the need do in vivo experimentation on live animals.

In addition to the typical steps needed to get a startup off the ground, the PhantomCor team, which consists of nine undergraduates and one master’s student in bioengineering, must get FDA clearance for the patent. The process typically takes 2-5 years.

“Ultimately, we’d like to pitch the device to companies as an accessory to imaging modalities,” Shahid said.

The research is precisely the kind of impact that is expected from the intersection of engineering and medicine developed by students and researchers at the Carle Illinois College of Medicine, which is expected to come on board in the coming years.

For more information on this story or for additional College of Engineering media inquiries, contact Mike Koon, Marketing and Communications Coordinator, 217/244-1256