Researchers have developed the first artificial red blood cells designed to emulate vital functions of natural red blood cells. If confirmed safe for use in humans, the nanotechnology-based product could represent an innovative alternative to blood transfusions that would be especially valuable on the battlefield and in other situations where donated blood is difficult to obtain or store. The artificial cells, called ErythroMer, are designed to be freeze-dried, stored at ambient temperatures, and simply reconstituted with water when needed. 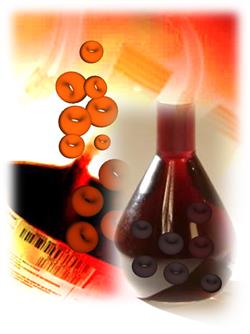 "One key goal is to advance field resuscitation of civilian trauma victims in remote settings and soldiers who are wounded in austere environments without access to timely evacuation," said lead study author Allan Doctor, MD, of Washington University in Saint Louis. "ErythroMer would be a blood substitute that a medic can carry in his or her pack and literally take it out, add water, and inject it. There are currently no simple, practical means to bring transfusion to most trauma victims outside of hospitals. Delays in resuscitation significantly impact outcomes; it is our goal to push timely, effective care to field settings."

The donut-shaped artificial cells are formulated using nanotechnology--in partnership with Dipanjan Pan, an assistant professor of bioengineering at Illinois--and are about one-fiftieth the size of human red blood cells. A special lining encodes a control system that links ErythroMer oxygen binding to changes in blood pH, thus enhancing oxygen acquisition in the lungs and then dispensing oxygen in tissues with the greatest need. Tests show ErythroMer matches this vital oxygen binding feature of human red blood cells within 10 percent, a level the researchers say should be sufficient to stabilize a bleeding patient until a blood transfusion can be obtained. 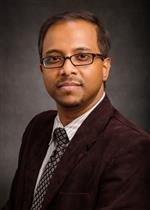 Dipanjan Pan
So far, tests suggest ErythroMer has overcome key barriers that halted development of previous blood substitutes, including efficacy and blood vessel narrowing. The team's next steps are testing in larger animals, ongoing safety assessment, optimizing pharmacokinetics, and ultimately conducting in-human clinical trials. The researchers are also pursuing methods for scaling up production. If further testing goes well, they estimate ErythroMer could be ready for use by field medics and emergency responders within 10-12 years.