The daughter of engineers, Ritu Raman moved around a lot, attending 10 schools on three continents. That included a stop in Nairobi, Kenya. During her time in Kenya, she would often join her father on trips to install communications towers in rural villages, where she was exposed to the diversity of culture and the difference in socio-economic conditions. 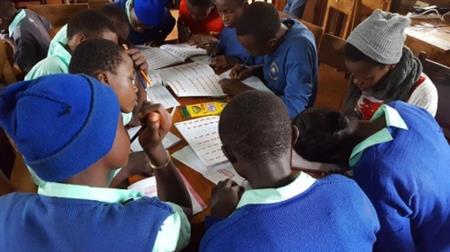 Student first create technical 3D drawings on paper, then learn how to draw those same images through TinkerCAD.
“That experience taught me that the fundamental divide between the haves and have nots is opportunity. Equal and fair access to a good education can revolutionize lives and revitalize communities.”

Earlier this year, Raman, who just completed her PhD in mechanical science and engineering, met with with Brian Lilly, an adjunct associate professor at the University of Illinois’ Technology Entrepreneur Center who has many ties to Kenya. This inspired a decision to establish the Young Engineers Initiative (YEI). The goal of the program is to expose students to engineering and start to teach them skills that will make them highly employable as adults.

“When I heard Prof. Lilly talk about the schools in Kenya, I worried that there was almost no change in the past 20 years,” Raman said. “That was a big motivation for me. I remembered the children I had met when I was living in Kenya and how much enthusiasm and how many ideas they had. I wanted to be able to give them the tools that they needed to address challenges and solve problems.”

Lilly, who has established business and social outreach programs in Kenya for a number of years, was the guest of honor at an end-of-the-semester honors program at a rural school in Kenya and was asked to help hand out the awards. To demonstrate the economic divide, consider that the valedictorian received a loaf of bread, a bottle of soda and a biscuit. Like Raman, Lilly realized the untapped potential of young minds there and their desire to learn. He decided to give that student a mechanical pencil and eraser and a sketchpad as well with the hopes of growing his interest in engineering.

The experience was the genesis of YEI.

The goal of Lilly’s businesses in Kenya is to help the people build a for-profit enterprise that is sustainable. The same goal is true for YEI – empower young people by teaching them life skills so they can support themselves, serve their communities, and take away the need of donor dependency.

“YEI embodies the quote of ‘If you can teach a man to fish, you can feed them for life,’” Raman added.  “The idea is not simply teach them any skill, but ones that can help solve problems.”

Lilly, his daughter, Grace, and several U of I students are using drawing to accomplish this goal. Through YEI, the plan is to first encourage the Kenyan students to draw two-dimensional objects, to then do so in 3D, and finally by using computer-aided design (CAD). The students will able to then use see tangible results through the use of a 3D printer.

“That’s how you develop your skills of operation,” Lilly explained. “If I have to draw, I will pay attention to its details far more. It starts to train your mind and to understand the environment, the physics, and the design.”

Raman doubled up on her impact by commissioning high school students at the U of I’s Mechanical Science and Engineering GAMES camp called Girls Building Awesome Machines (GBAM) to design and build 3D printers that could be then sent to Kenya for the YEI initiative.

“I pitched GBAM’s weeklong project as an opportunity for the girls to design and build a simple 3D printer that could be operated by the students in Kenya,” Raman explained. “In addition to making the GBAM girls realize that they could use engineering to tackle real-world problems head-on, I figured this would also be an incredibly realistic way to teach them how to design under stringent cost and material constraints – like true engineers,” 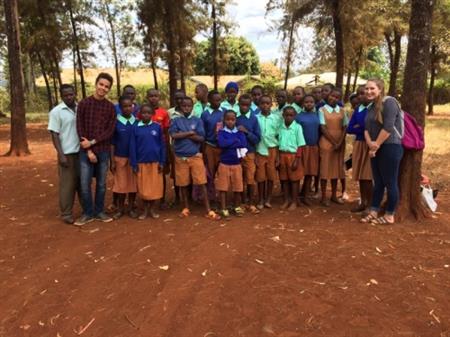 In August, Brian and Grace Lilly returned to Kenya with 3D printers and laptops that faculty and their students could use. They are training teachers and older students so that they hopefully can in turn train the younger students.

“The majority had literally never touched a computer before, let alone used the Internet,” Grace Lilly said of that initial experience. “The end result was that each student was able to open Notepad and type their name, favorite animal, and how many siblings they have. This may not seem like a big accomplishment, but this still felt like a big step in introducing them to computers. The actual feat was getting them extremely excited about drawing, and getting them thinking about technological advances that they could be involved with in the future.”

Brian Lilly enthusiastically and boldly sets out the vision. “I want a whole blueprint of taking kids from where they are to becoming an engineer someday at the University of Illinois,” he said. “I’m trying to get kids in lower resource areas excited about the opportunities. If you start with CAD, a hard skill to master, they can take those hard skills anywhere and get a job.”

Lilly commissioned Raman and fellow Illinois student Nate Renner to develop the educational program centered on the concept. They came up with steps to teach technical 3D drawing, first on paper then through computers using TinkerCAD software, a program that can be downloaded from the Internet.

The YEI team will return to Kenya in the next year to continue with the program and finalize a realistic schedule plan of implementation, which can be used in other rural schools in Kenya and eventually other countries in Africa.

“The idea of YEI is to teach young students in Kenya how to build solutions to the problems they face,” Raman concluded. “That’s what engineers do. The way we teach them in college is to say, ‘Here is a set of materials and here is a way of putting those materials together to addresses a technical challenge or problem.’ That’s the same method we want to use in YEI. Through a computer and a basic 3D printer, students can design and build something right away. We were hoping that would give them a sense of empowerment that they could address any challenge they face simply by building a solution to it.”

For more information on this story or for other College of Engineering media inquiries, contact Mike Koon, Marketing and Communications Coordinator, 217-244-1256