A multi-institutional research collaboration has created a novel approach for fabricating three-dimensional micro-optics through the shape-defined formation of porous silicon (PSi), with broad impacts in integrated optoelectronics, imaging, and photovoltaics. 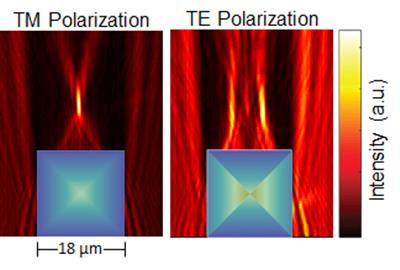 Figure shows how the PSi square GRIN microlens focuses and splits TM and TE polarized light, respectively. TM polarized light is focused to one point and TE polarized light is focused to two different points. The refractive index gradient for the square microlens under the two different polarizations is illustrated using the color map overlaid on the lens (blue is low refractive index, and orange is high refractive index).
“The emergence and growth of transformation optics over the past decade has revitalized interest in using GRIN optics to control light propagation,” explained Paul Braun, the Ivan Racheff Professor of Materials Science and Engineering at Illinois. “In this work, we have figured out how to couple the starting shape of the silicon micro-structure and the etch conditions to realize a unique set of desirable optical qualities. For example, these elements exhibit novel polarization-dependent optical functions, including splitting and focusing, expanding the use of PSi for a wide range of integrated photonics applications.

“Our demonstration using a three-dimensional, lithographically-defined silicon platform not only displayed the power of GRIN optics, but it also illustrated it in a promising form factor and material for integration within photonic integrated circuits,” stated Neil Krueger, a former PhD student in Braun’s research group and first author of the paper, “Porous Silicon Gradient Refractive Index Micro-Optics,” appearing in Nano Letters (DOI: 10.1021/acs.nanolett.6b02939).

“The real novelty of our work is that we are doing this in a three-dimensional optical element,” added Krueger, who has recently joined Honeywell Aerospace as a Scientist in Advanced Technology. “This gives added control over the behavior of our structures given that light follows curvilinear optical paths in optically inhomogeneous media such as GRIN elements. The birefringent nature of these structures is an added bonus because coupled birefringent/GRIN effects provide an opportunity for a GRIN element to perform distinct, polarization-selective operations.”

According to the researchers, PSi was initially studied due to its visible luminescence at room temperature, but more recently, as this and other reports have shown, has proven to be a versatile optical material, as its nanoscale porosity (and thus refractive index) can be modulated during its electrochemical fabrication. “The beauty of this 3D fabrication process is that it is fast and scalable,” commented Weijun Zhou at Dow. “Large scale, nanostructured GRIN components can be readily made to enable a variety of new industry applications such as advanced imaging, microscopy, and beam shaping.”

“Because the etching process enables modulation of the refractive index, this approach makes it possible to decouple the optical performance and the physical shape of the optical element,” Braun added. “Thus, for example, a lens can be formed without having to conform to the shape that we think of for a lens, opening up new opportunities in the design of integrated silicon optics.”

Paul Braun is also the director of the Frederick Seitz Materials Research Laboratory at Illinois. In addition to Braun, Krueger, and Zhou, co-authors of the paper include Seung-Kyun Kang, Christian R. Ocier, Glennys Mensing, and John A. Rogers (University of Illinois), Aaron L. Holsteen and Mark L. Brongersma (Stanford University).
________________