“I think it matters that when you are able to do something…do it!” That’s the personal credo of Nick Holonyak, Jr., and a testament to an incredible career in the world of ideas. 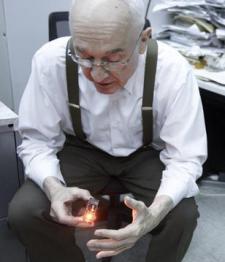 Nick Holonyak, Jr.
Nick Holonyak, Jr.
The son of an immigrant coal miner in southern Illinois, Holonyak was the first in his family to go to college, earning his bachelor’s, master’s, and PhD degrees in electrical engineering from the University of Illinois. It was there that he met and became the first graduate student of John Bardeen, the only two-time recipient of the Nobel Prize in Physics and the co-inventor of the transistor.

After completing his studies at Illinois, Holonyak joined the GE Advanced Semiconductor Laboratory in Syracuse, New York, where his fellow scientists were exploring ways to create light from solid materials, including direct semiconductors made from gallium arsenide (infrared), and indirect semiconductors of gallium phosphide. A contrarian, and a competitor, Holonyak had the idea of combining those materials together, something his colleagues said would not work.

“I knew that I wanted to be where the eye sees,” Holonyak remarked. Making his own (GaAs phosphide) crystals, he demonstrated the first practical, visible spectrum light-emitting diode on October 9, 1962. While not everyone believed Holonyak’s claim that the tiny device would someday replace incandescent light sources everywhere, his mentor, John Bardeen did. (Holonyak explains his LED technology in an exclusive BBC interview, October 9, 2012) 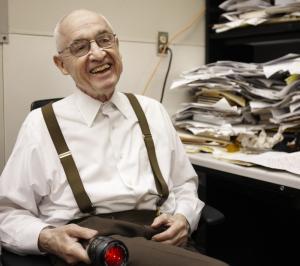 Bardeen invited Holonyak to join the Illinois faculty, where Holonyak could readily follow his wide-ranging interests. With a career spanning the development of electronics for modern society, Holonyak and his students have achieved a scientific milestone in every decade: the practical development of the quantum well laser—making possible lasers for fiber-optic communications and the Internet, CDs, DVDs, medical applications, and more—along with improvements in vertical cavity surface-emitting lasers, and most recently, the transistor laser that outputs electricity and light simultaneously.

As the John Bardeen Endowed Chair in Electrical and Computer Engineering and Physics, Holonyak has advised more than 60 graduate students, published more than 500 academic papers, and holds 51 patents. He is one of only 13 Americans to have won both the National Medal of Science and the National Medal of Technology. In 2004, he won the Lemelson-MIT Prize—the world’s largest single cash prize for invention. He was inducted into the National Inventors Hall of Fame in 2008, and the Engineering and Science Hall of Fame in 2011.

For Nick Holonyak, Jr., life is about improving the world. Today, at age 83, he can still be found in his lab every day, still in pursuit of light.

This fall, the University of Illinois at Urbana-Champaign is celebrating “LED 50 years,” culminating in an anniversary symposium on October 24-25.