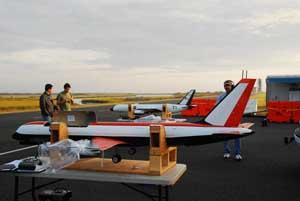 NASA's AirSTAR craft before flight.
NASA's AirSTAR craft before flight.
Using her novel L1 adaptive control flight system, developed with her former postdoctoral student Chengyu Cao (now at the University of Connecticut), Hovakimyan aims to improve the performance and safety of aircraft in the presence of uncertainties, which refer to anything that cannot be modeled perfectly, such as turbulence. Hovakimyan added that aircraft applications present the right testbed for testing the performance of adaptive controllers due to their large variations in speed and altitudes.

Irene Gregory, a senior research engineer at NASA Langley Research Center, believes L1 adaptive control theory is a breakthrough in the field because it is the first control system to allow for fast adaptation with guaranteed robustness and performance.

Gregory added that adaptive control methodologies prior to L1 were limited to slowly varying uncertainties and did not have analytically provable guarantees for their performance. Moreover, the successfully flown adaptive controllers until now were augmentation of baseline gain-scheduled controllers, and they were gain-scheduled themselves, which defeats the point of adaptation.

“Adaptive control is flight critical,” explained Kevin Wise, senior technical fellow of advanced flight controls at the Boeing Company in St. Louis, Missouri. “If there’s a problem with the algorithm, it will cause a crash. Naira’s theories have greatly improved adaptive control by improving the performance and reliability of algorithms. This will allow us to get the benefits of adaptive control without the risks of oscillation or instability.”

“Adaptive Control was a relatively new area for her, but she immediately understood what the problems were and took it to the next level,” Wise said. “She has brought a fresh perspective to this type of work that has advanced the entire field.”

Wise believes that the future of adaptive control for manned flight and hypersonic flight is still about 10 years away, yet Hovakimyan’s work has already begun to pave the way.

“Researchers have already taken her algorithms and flown with them on small research planes,” he said. “It takes time for an innovation of this type to make it into industry, but Naira’s theories are helping to speed that transition.”

Naira Hovakimyan
The flight test with the L1 adaptive flight control system on March 24 lasted approximately 14 minutes, completing a set of 14 flight cards (program scenerios), which are potentially dangerous situations an aircraft can encounter during a flight. The adaptive controller guaranteed safe operation of the vehicle during the flight, and the pilot satisfactorily flew the specified tasks, consistent with the theoretical predictions, Hovakimyan said.

Enric Xargay, a PhD candidate in aerospace engineering who conducts research with Hovakimyan, said that prior to the March 24 flight, they had conducted simulations of the flight at the NASA Langley Research Center.

“We flew all of the flight cards with the same performance as during simulation,” Xargay said. “It matched simulation almost one to one, which gives us confidence in the work done at the simulator at LaRC. In general, the pilot liked the predictability of the aircraft behavior with L1.”

Further tests will take place in June and September 2010.

While this first flight can be viewed as a major step in the development of all-adaptive flight control systems, it only represents a small step forward toward certification of these systems.

“Our goal is to one day implement our adaptive flight control system into a major plane, but there is still a long way to go,” Hovakimyan said. “From the perspective of flight validation, this is an excellent demonstration. For academic research to make it this far is a big leap forward.”

If you have any questions about the College of Engineering, or other story ideas, contact Rick Kubetz, Engineering Communications Office, 217/244-7716, editor.