Rakesh Nagi, head of the Department of Industrial and Enterprise Systems Engineering, has been appointed as the interim director for Illinois Applied Research Institute (ARI) headquartered in the University of Illinois Research Park. He will replace former director Jeff Binder, who has recently accepted an associate director position at Argonne National Laboratory. 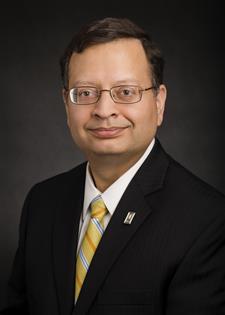 Rakesh Nagi
“Since joining the ISE faculty in August 2013, Professor Nagi has made significant strides in the department, engaging faculty, enhancing the curriculum, and elevating the department’s image and ranking,” explained Andreas Cangellaris, dean of the College of Engineering. “I am confident that his impressive work ethic, leadership talent, and his considerable experience working with the applied research institutes at both the University at Buffalo and Penn State, will serve him well in leading ARI.”

Under Nagi’s leadership, the University will be conducting a rigorous review of ARI in late winter or early spring to assess next steps for the Institute as it nears the end of the initial funding period. He will continue to serve as ISE department head.

Nagi, who joined the ISE faculty in August 2013, has worked in full-spectrum research (from basic to applied) for most of his career. He received his master’s and PhD degrees in mechanical engineering from the University of Maryland at College Park while he worked at the Institute for Systems Research, and Lorraine, Institut National de Recherché en Informatique et en Automatique at Lorraine, France.

The Illinois Applied Research Institute is the state's leader in performing translational R&D for commercial and government mission-driven organizations. Launched in late 2013 ARI is a joint initiative of the University of Illinois at Urbana-Champaign College of Engineering and the Office of the Vice Chancellor for Research that harnesses the considerable depth of creativity and scientific ability on the Illinois campus. The ARI is based in the University of Illinois Research Park, Champaign-Urbana's technology and scientific business center.
___________________