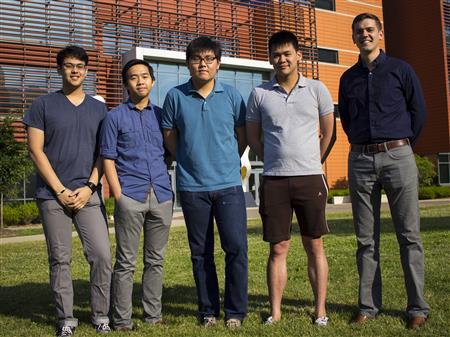 Amber Ag team includes Joseph Varikooty, Chief Technology Officer and President; Xiang Wen, Designer; Yang An Tang, Chief Operating Officer; Wei Yang Ho, Design and Manufacturing Engineer; and Lucas Frye, Chief Executive Officer.
One of the biggest factors in the profit margin for farmers is the moisture content of their harvest at the time of sale. A startup from the University of Illinois, Amber Ag, is providing a cost-effective way for farmers to monitor and even help alter the condition of their crops in silos.

“The post-harvest losses statistics in agriculture are extremely distressing. With the best infrastructure and accessibility to technology in the US, we’re still seeing five to 10 percent of damaged corn even before it reaches the grain elevator,” said Amber Ag Chief Technological Officer Joseph Varikooty, a junior majoring in electrical and computer engineering. “Internationally, we’re looking at 25-30 percent post-harvest losses."

The product, Amber Waves Grain Sensing, won first prize at the Cozad New Venture Challenge sponsored by the University of Illinois Technology Entrepreneur Center last month and they are on track to begin beta testing with first wheat farmers in late summer and then grain farmers this fall.Amber Ag aims to tackle this by providing an easy-install, wireless system where farmers can use in their grain bins to monitor temperature, moisture, and carbon dioxide and then provide actionable feedback of their stored harvest.

“Optimally harvested grain contains about 15 percent water,” said Varikooty. “Every percentage point the grain is off of that number, it costs the farmer about six cents per bushel. That translates to a loss of about $6,000 for a harvest of 100,000 bushels.”

“If the grain is too dry it leads to cracking or if it is too wet it could mean the presence of bacteria, yeast or mold,” said Varikooty. “Oftentimes farmers are off by three to four percent when they bring the grain to an elevator, meaning an even more significant loss. Our product looks to directly benefit the farmer – reducing a percentage point of losses annually translates to significant annual savings.”

The current most common method for monitoring uses systems of cables run through the bin, which can cost between $10K-15K per bin. Because of the cost, Varikooty reports that only about 5-10 percent of the farmers incorporate sensing into their grain storage.

“In order to safely install a system like that, it could mean reinforcing your grain bin. To do this, you essentially add an entire new roof,” said Amber Ag Design and Manufacturing Engineer Wei Yang Ho, a junior majoring in mechanical science and engineering. 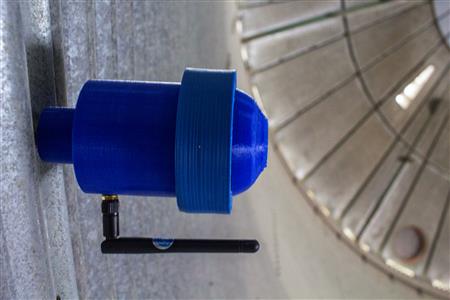 Here is a look at the first Amber Waves Grain Sensing prototype.
Amber Waves’ first prototype consists of six to eight wireless sensors mounted in the bin, which transmits data to a microcomputer hub at the top and transmitted to a server and processed.

“Ultimately, we are designing this for the farmer. Easy installation is but the first step, we want to also design it for ease of use,” said Yang An Tang, the team’s Chief Operations Officer and a junior in electrical and computer engineering. “Currently, farmers receive a multitude of data which can be overwhelming. Not every farmer wants to deal with confusing graphs, so we’re looking at simplifying this. Our algorithm collects the data and runs it through algorithms to generate meaning and actionable data. Farmers can make decisions based on these results.”

Amber Agriculture started like many startups with the focus of the team being much different than its original intention. In October 2015, Varikooty and Tang, and Xiang Wen, a sophomore in electrical and computer engineering, participated in the 54.io competition, a hackathon event for startups, which challenges teams to plan, build and launch a startup with fellow students in 54 hours. Adding Ho and Lucas Frye, a first-year MBA student at the University of Illinois College of Business, they won 2nd place at 54.io with their product to provide sensors for older model dryers to accurately detect when clothes are dry.

Sensing a greater need in agricultural applications, the team shifted gears and consulted the operations manager at The Andersons as well as a grain-bin builder from Illini FS. In those field trips, they learned that the biggest area of spoilage occurs where there is the greatest fluctuation of temperature, typically near the edges of the bin which are exposed to sunlight during the day and rapid night time cooling, and the top center of the bin where air that is forced to the top through a column of fines is diverted to the edges because crushed particles block the air.

“We basically learned about the storage process from the beginning when grain is filled into the grain bin, to the end when the farmer brings grain to the grain elevator,” Ho said. “With this better understanding, we knew how best to design our sensing system, which currently aims to monitors temperature, moisture content, and CO2 output on the area around and on the edges of the bin. It in turn allows you to accurately estimate the condition further inside the bin.” 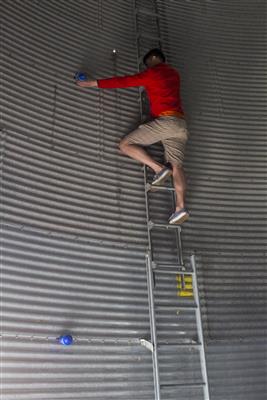 A team member installs sensors in an empty grain bin.
Following 54.io, the team took advantage of the entrepreneurial resources on campus from Founders such as the Startup Bootcamp, as well as from the Technology Entrepreneur Center with the Cozad New Venture Challenge.

“Most of us didn’t know much about entrepreneurship,” Ho said. “Without the Founders and Cozad, I’m not sure if this story would have been possible.”

This will be a busy summer for Amber Waves, from meeting with consumers at ag tech conferences and farm progress shows to modifying the prototype to incorporation. The team, who is working out of the iVenture Accelerator at Research Park, is looking at ag accelerators and also SBIR funding.

“The feedback that we received from the judges of Cozad was that were presenting at the right time,” Varikooty said. “A few years earlier the Internet of Things Market was still dormant. A few years from now with the growth of wireless sensing, the market may be saturated.”

In addition to maximizing profit for the farmers, timing is also right considering the growing demand for food traceability. This gives farmers additional incentive to verify conditions of their grain even before taking it to market. To that end, Frye, Amber Waves CEO, is meeting with the likes of Frito Lay to get their feedback on how monitoring these conditions plays an even more critical role.

“There is a strong push from consumers for the government to tighten food safety,” Varikooty noted. “One of the biggest hurdles for farmers in this space is the barrier to entry, where only largest companies can afford to invest. We want to help slash that barrier to entry and allow even the smallest farmer to get into this market of food traceability. Especially in soybeans, there is already pressure on the quality of the crop and how you maintain it during storage.”

For more information about this story or for other Engineering at Illinois media inquiries, contact Mike Koon, Marketing and Communications Coordinator, 217/244-1256