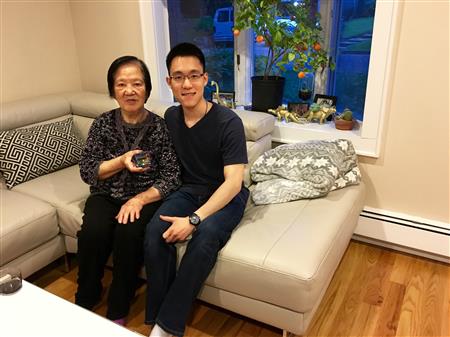 William Cheng, shares ExoWear's initial prototype with his grandmother.
Inspired by the needs of their grandmother, twin brothers William and Stephen Cheng, launched the startup ExoWear to help monitor the progress of in-home physical therapy.

While in high school on Long Island, the brothers cared for their grandmother, who suffers from arthritis and scoliosis, helping her walk outside and complete her daily exercises. They also were her voice at the physical therapist. After graduation, however, William left for the University of Illinois to study civil and environmental engineering and Stephen for Boston College, where he studied pre-med and business, leaving a void in the care of their grandma.

“With her language barrier, it is tough for her to communicate with the physical therapist once we left so there was little oversight,” William said. “She cut back on doing her exercises and her condition got worse.”

The brothers, who are now seniors in college, decided to do something to help her grandmother and others in that situation. They are taking advantage of the entrepreneurial resources at the University of Illinois and its partnership with the University of Chicago Booth School of Business to create a device to address the problem.

In less than a year, William and Stephen have teams on three campuses --- Illinois, Chicago, and Boston College. The result is a system designed to monitor range of motion and gauge the progress of physical therapy for patients. ExoWear includes sensors above and below a joint (beginning specifically with the knee). It tracks the 3D movement based on the change in relative distance between the sensors. The results are transmitted wirelessly to the physician or physical therapist for evaluation. Ultimately, the device will be tucked under clothes so as not to be intrusive and worn all day so that the physician can see how active the patient is and combine that with the information about specific exercises.

“There are different checkpoints as you go through your rehab,” William Cheng said. “Especially for total knee replacement, range of motion is essential to understand how far you are along in the rehab process. By measuring that information, we can inform the physician whether or not the patient is keeping up with their rehab program or perhaps doing the wrong exercises. This will help get the patient back on track faster.”

The Chengs were extra motivated to quickly helping their grandmother, and the resources available in the entrepreneurial ecosystem are helping make it happen.

William took a class in the fall from Brian Lilly, a lecturer with the U of I’s Technology Entrepreneur Center and initially proposed a brace, specifically to treat scoliosis. He also presented his idea at a Social Fuse event sponsored by the TEC, which helps students network to form startups.

“I was a little intimidated.” William admitted on his Social Fuse pitch. “As an engineer, I never thought I would need to do public speaking. I didn’t have as much experience as the others, and I was pitching an idea I had just conceived. It was tough, but it got me into that space.”

Lilly felt the device wasn’t light or compact enough to be viable and after further advice from Lilly and Dr. Jerrad Zimmerman of Carle Sports Medicine, William focused on a wearable design.

Because his civil engineering degree track concentrated in structural design, William began looking for those outside his sphere. That mission began in December.

“I was relentless in this pursuit,” William said. “I ignored all the complications and the fact that I didn’t have all the skills, and was committed to making this happen.”

William teamed with a senior design project in electrical and computer engineering (ECE 445) to work on electrical design and hardware, while Stephen formed a team in Boston to focus on computer science and marketing.

The ExoWear team from the University of Illinois includes (left-right) co-founder William Cheng, who completed his bachelor's degree in civil and environmental engineering; Surya Bakshi, a graduate student in computer science; and Caleb Klaus, Titus Fong, and JJ (Mengda) Qi, who each joined ExoWear after working on the project as part of ECE 445.
That month William went to the Chicago Innovation Exchange and Chicago’s Polsky Center for Entrepreneurship for Fab Lab training. Gorana Kolar, Associate Director of the Polsky Center, introduced William to opportunities in Chicago and to students interested in startups. Those students included Dan Reger, an MBA candidate at Booth School, who became ExoWear’s Chief Financial Officer and developed a team in Chicago.

This semester, ExoWear became involved in the nationally respected Edward L. Kaplan New Venture Challenge hosted by the University of Chicago and the Cozad New Venture Competition hosted by the TEC and the University of Illinois. The startup was a Cozad finalist on April 28, a semifinalist in NVC, and a finalist in Boston College’s Shea Venture Competition, where they won the best product award in the pitch phase

“We wouldn’t have made it this far without being a part of NVC and Cozad,” William said. “Being a part of NVC helped prepare us for Cozad because of its emphasis on the business aspect. Our feedback from the judges at Cozad was that they were impressed with the clear understanding of how our business would operate. The process in both accelerators wasn’t just about the potential financial backing. More importantly it was about getting connected. The fact that we became a much larger team with members in three different cities, I believe, accelerated our development.”

In addition to advancing the technology, ExoWear team members have met with representatives of seven hospitals, who have been receptive to the potential of its application. Its onset into the market coincides with a push by the insurance industry, particularly Medicare, to provide better healthcare at a lower cost. Under guidelines from the Centers for Medicare and Medicaid Services, the Comprehensive Joint Replacement (CJR) model aims to “support better and more efficient care for beneficiaries undergoing the most common inpatient surgeries…. and encourage hospitals, physicians, and post-acute care providers to work together to improve the quality and coordination of care from the initial hospitalization through recovery.”

The ExoWear device promises to accelerate the recovery process, which means fewer visits to rehab centers. Therefore, the team is hoping to get endorsements from not only hospitals, but also insurance companies.

“This device wouldn’t replace the physical therapist,” William points out. “It would be more of an add-on value. Patient compliance in doing proper exercise is really low, especially for injuries that take a longer period of recovery. It is not uncommon for patients to just stop doing their exercises for many reasons, including not seeing immediate improvement. We can tell them how they are progressing immediately, which should encourage them to keep going.”

This summer, ExoWear will work out of the iVenture Accelerator at the University of Illinois’ Research Park, where it plans to improve the prototype, expand its engineering, and aggressively move toward commercialization. The team will also have space at the Polsky Accelerator at the University of Chicago, which gives the team access to other medical accelerators and to the medical community at large. They will be begin clinical trials and collecting feedback from patients at places like Hinsdale Orthopedics and ATI Physical Therapy in suburban Chicago, Carle Foundation Hospital in Urbana, and Joint Ventures in Boston.

ExoWear has been in contact with venture capitalist firms like Hyde Park Angels and Chicago Ventures who are anxious to get feedback from clinics and patients toward the end of the summer.

Neither brother set out to build a startup and they laud the partnership between the universities for its role in building ExoWear so quickly.

“Students at both campuses are beginning to tap into the potential the other can give them in building their teams.” William said. “It provided an opportunity for me to learn skills I wouldn’t have otherwise. Whether this project succeeds or not, I will still have the background to pursue other venture opportunities in the future.”

Of course, the Chengs are anxious to take the device back to New York this summer to their most important customer, their grandma.

“We didn’t actively try to find a solution until we realized she stopped doing her physical therapy,” William said. “We hope that our product helps get her back on track and benefits other patients in her condition down the road. If that happens, this will have all been worth it.”

For more information on this story or for other College of Engineering media inquiries, contact Mike Koon, Marketing and Communications Coordinator, 217/244-1256