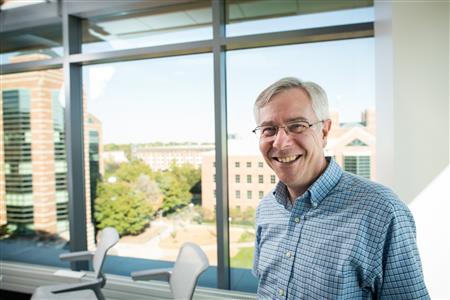 Krein (BS, 1980, MS '82, Electrical Engineering), is among a class of 80 engineers and 22 foreign associates, which includes four other University of Illinois alums, announced by the academy Feb. 8. Election to the NAE is one of the highest professional honors an engineer can garner. Its total 2,277 members and 233 foreign associates are an elite group distinguished by their outstanding contributions to the fields of technology and engineering.

A theme within Krein’s diverse research is the application of innovations in nonlinear control to challenges in switching power converters. His team invented an active balancing circuit to extend cycle life of rechargeable batteries, and he co-founded SolarBridge Technologies (acquired by SunPower in 2014), which invented the first solar inverters that will last as long as solar panels. His contributions have played an important role in making solar power increasingly more affordable than retail electricity.

Krein developed one of the first modern power electronics teaching labs. He joined the faculty in 1982, departed to work three years in industry and re-joined ECE ILLINOIS in 1987. He retired in 2015 and continues to serve the department as a research professor.

“It is really overwhelming to be added to this group of leaders that I admire,” Krein said. “Engineers aspire to change the world, and the mentors, colleagues, and students I have worked with have been dedicated to improving quality of life for all.  ECE ILLINOIS, as the best program in its fields in the world, has been an incredible place to work, teach, and learn.”

The following are other Engineering at Illinois alumni honored in this year's class:

For more information on this story or for other Engineering at Illinois media inquiries, contact Mike Koon, Marketing & Communications Coordinator, 217/244-1256.