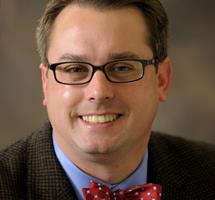 Joshua Peschel, Research Assistant Professor in Civil and Environmental Engineering
Peschel has developed a low-cost two-foot long robot boat that carries onboard a 360-degree panoramic camera. The images are then stored on a chip like an SD card. The technology is also capable of real-time environmental monitoring, such as taking pH and dissolved oxygen readings, and collecting water samples to be returned and tested.

“The boats let us go to places that the people can’t go and allow us to cover a sufficient area to help make key decisions,” Peschel said. “If you look at everything that’s come before this, they are much bigger, more expensive and not very practical to navigate rivers that are extremely shallow or have dense vegetation, including agricultural tributaries.”

Peschel adds that because the bottom of the boat is flat and doesn’t have a rotor, it can go through debris and low-flowing areas and over any kind of submerged obstructions. Peschel’s boats are also able to provide images in areas where UAVs are unable to fly such as streams and rivers covered by dense trees or other vegetation.

Water is a hot topic, especially in developing countries, as scientists and engineers work to solve major issues with potable supplies. Peschel and his graduate student Sierra Young spent the summer at the Ashoka Trust for Research Ecology and the Environment (ATREE) to test Peschel’s latest technology around lakes and streams near the city of Bangalore, India.

“There are lakes that feed the irrigated lands and reservoirs for the greater Bangalore area,” explained Peschel. “Those downstream reservoirs are drying up and that’s catastrophic since that is a source of the water supply for the metropolitan area. We’re trying to help understand why.”

In India, for instance, farmers are damming up the water for their own purposes as evidenced by a lot of fragmentation of the landscape. That activity is ramping up as land use is changing from food-based crops like corn to more cash crops like eucalyptus, which require more water. Understanding exactly how much water is being captured is a key question. 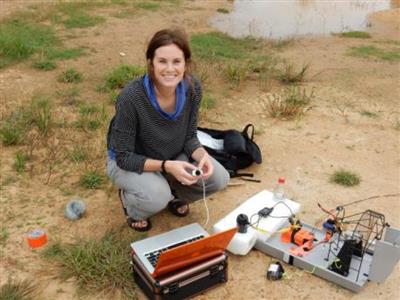 Graduate student Sierra Young spent the summer testing the technology around lakes and streams near Bangalore, India.
That issue certainly is not confined to developing nations with water shortages well documented in California and Texas. Peschel notes that navigable waterways are public, even drainage ditches surrounded by private property as long as they aren’t accessed from the property. This technology, thus, will be able to provide agencies with high quality images of any water source that will help tell the story of what is happening to the water.

“It’s not enough to just take pictures,” Peschel said. “We need to be able to use some additional low-cost sensors to help in mapping so we can produce better flood models or models of erosion and containment transport. Computer algorithms and some special sensors and thermal cameras on board detect entry points, like tile drains, even when they are visibly obstructed."

In addition to the boats, Peschel is using other small, unmanned platforms to provide farmers with 3D maps of agricultural areas, many of which have never been mapped before.

“The goal is to field test what we’ve been developing here to see what works and how we can improve our technology and scientific understanding,” Peschel said. “We are especially targeting people who are trying to do environmental monitoring on a very tight budget in areas where there is little to no information about the environment in the first place.” 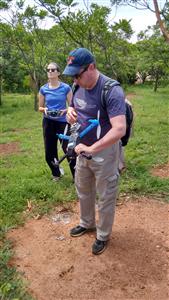 The project in India has significant applications in the United States as well, where water shortages in California and Texas are well-documented.
As part of the NSF grant, Peschel also hosted a workshop in Bangalore with his co-investigators on the project, Sally Thompson (UC-Berkeley) and Veena Srinivasan (ATREE), which brought together experts from academia, government and private industry to help develop strategies to study and address these types of issues. The workshop also included start-up companies who are equipping “citizen scientists” with the technologies to help gather data. That is much more possible thanks to mobile phones and GPS.

“The United States has an information-rich society and we’re still having a lot of trouble with climate, infrastructure, and policy. Imagine how challenging it is for a developing country where the data is sparse. This is a great project because it is putting affordable technology into the hands of people trying to make long-term policy that would benefit communities into the future.”

Peschel will be giving an invited talk on overcoming the sparse data problem in India using low-cost robots at the 2015 American Geophysical Union Fall Meeting in San Francisco on December 18th.

For more information on this story or for other Engineering at Illinois media inquires, contact Mike Koon, Marketing and Communications Coordinator, 217/244-1256