Current state of the art in cancer pathology relies on the human evaluation under the microscope of stained tissue slices, which is intrinsically a subjective procedure. The future, researchers say, will involve a much more engineering approach to biomedicine. On the optics side, that future will involve providing not just visual images of cells and tissues, but also numbers and physical quantities that tell more about structure and dynamics.

With that in mind, a team of University of Illinois researchers have developed a breakthrough optical method for determining if tissue is cancerous or not. Their findings, which were published in SPIE’s Journal of Biomedical Optics, will greatly improve the accuracy of treatment in cancer patients. 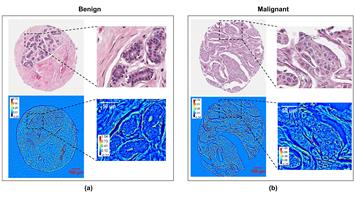 This new optical technique can more accurately tell whether a cancer cell is benign or malignant.
“We have shown in this study that our label-free (stain-free) images capture all the morphology that you need in order to diagnose malignancy.,” explained Hassaan Majeed, one of the lead authors of the study. “Since the pixel values in our images represent physical properties of tissue we can now move on to build a quantitative, automated screening method based on advanced computer algorithms.”

Majeed researches under Gabriel Popescu, an Associate Professor of Electrical and Computer Engineering and the Director of the Quantitative Light Imaging Laboratory at the Beckman Institute. Much of Popescu’s work to date in this area has been on prostate cancer.

“Only one out of every 30 surgeries on prostate cancer patients is actually saving a life,” Popescu said.  “However, right now there are no good ways to tailor the treatment for each patient, so surgeries are done for precaution. Clearly there is a need for predictive power. We showed recently that our label-free technique, because it is sensitive to the nano-scale tissue architecture, can inform much more accurately about prognosis of prostate cancer and help doctors better individualize treatment for each patient.”

While regular microscopes use one beam of light, which gives the doctor a brightness map, Popescu’s invention uses an interferometer, which uses two beams of light – one that is kept as a reference and one that, when it goes through a sample, is modified. Comparing these two gives access to high contrast imaging of subtle structural details in transparent samples, such as unstained tissues. That’s what makes it unique.

“We measured the success of the diagnoses on our images against the gold standard,” Majeed explained. “This is a preliminary study where we are basically saying that we can resolve all the morphological markers needed by a pathologist for diagnosis. This now motivates us to move on to the next step, which is automatic tissue segmentation, using classifiers inspired by the human brain pattern recognition to perform diagnosis.” 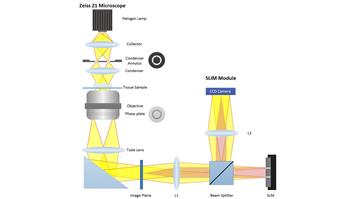 This invention uses an interferometer, which uses two beams of light, one that is kept as a reference and one that, when it goes through a sample, is modified.
Popescu has been in the process of developing microscopy techniques, which don’t require staining, for the past 12 years or so. One of the major benefits of using unstained cells is that they have a longer lifespan, which means they can be studied longer. His lab has been partnering with pathologists at both Presence Covenant Medical Center in Urbana and at the University of Illinois Hospital in Chicago.

“We realize there is a lot of information in our images that could be useful for clinical applications like cancer screening and blood testing,” Popescu said.

Because researchers in his lab, like Majeed, have shown that it is possible to obtain quantitative information from a cell, that information can be shared over a large network. That’s where the research becomes a Big Data project, using computation to even more accurately make diagnoses, prognoses, and individualize treatment.

“We have a dream that in a few years, we will have these machines (our microscopes) paired with computing servers that will be able to screen tissues and automatically provide clinical information by quickly sifting through the majority of the specimens and then only flagging the important cases, to be further evaluated by the pathologist,” Popescu said. “The future, we believe, will be combining an advanced imaging technique like ours, which has the advantage of being quantitative and therefore more suitable to computation, with advanced algorithms in machine learning.”

This method compares closely with the computational advances, for example, in facial recognition, fingerprint reading, etc. By putting all the biopsies on a server (some 200 million procedures per year in the United States alone), which Popescu refers to as the “Netflix of Biopsies,” doctors will have the ability to better correlate the patient’s prognosis and treatment based on correlations with a vast repository.

Popescu realizes that in order for the technique to be accepted in the community it must be validated. The group has trained a number of pathologists on the technique, who in turn are comparing results with those of current methods for diagnosis. Popescu has also started a company called Phi Optics, which sells an interferometric imaging module that attaches to existing microscopes and incorporates this latest state-of-the-art technology. The company was launched with funding from the National Science Foundation SBIR program as well as a seed round led by Serra Ventures out of Champaign.

“What we hope is that having the microscopes available to the pathologists directly will make a huge difference,” Popescu said. “The instruments are much faster than they used to be, but really to be able to validate it, you need to increase the number of users.”

Popescu adds that while researchers are scratching the surface in this quantitative phase imaging, the field is growing fast. At least 10 startups across the world are manufacturing similar optical devices for the academic environment.

“That’s a sign that biologists are going to have access to this commercially,” Popescu said. “ That makes me very happy because it means we will be able to discover new applications that way.”

For more information on this story or for other College of Engineering media inquiries, contact Mike Koon, Marketing & Communications Coordinator, 217/244-1256