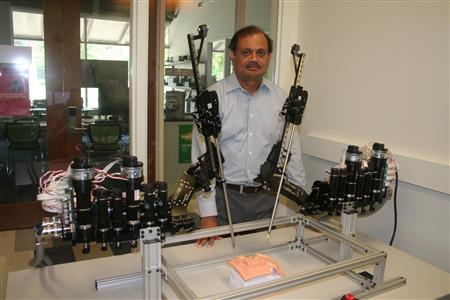 Kesh Kasavadas and his staff welcomed the RAVEN II robot assisted tele-surgery for tele-health, to the Health Care Engineering Systems Center.
In the same way that pilots train for actual flights through simulation the next generation of doctors will train for surgery. A group of researchers from the University of Illinois led by Professor of Industrial and Enterprise Engineering Kesh Kesavadas is at the forefront of a technology that will make that training virtual.

This summer, Kesavadas and the Health Care Engineering Systems Center, welcomed RAVEN II, the Robot-Assisted Tele-Surgery for Tele-Health, to its lab. Raven will allow future doctors hands-on training in robotic surgery without the use of a patient. It’s one of the first steps that will link cutting-edge medical research already taking place on campus with the engineering-based College of Medicine, opening in 2018. Eventually Robotic surgery and training will be a major piece to the College’s $10 million Jump Simulation Center.

“Robotic surgery has been around for about 15 years, but there hasn’t been much innovation in that space largely because there has been only one company  (Intuitive Surgical Systems) with an FDA approved robot,” Kesavadas said. “Things are going to change in the next five years with new companies coming into the market. While getting FDA approval is a big challenge, the fact that they have already shown that using a robot is a fundamentally safe and practical way of doing surgery will speed up that process.”

Kesavadas’ vision is that research at Illinois will be the genesis of much of the development, and the newly acquired RAVEN is only a piece of that vision. For instance, Illinois is in its second-year of a $50 million partnership with the Jump Simulation and Education Center at OSF HealthCare in Peoria, Ill.

“In Peoria, we have a full-fledged operating room built to scale,” Kesavadas explained. “You can simulate whole procedures -- robotic, laparoscopic or traditional open surgery. This allows us to go and test to see how the simulator would work inside an operating room.”

“You could put (Raven) inside the OR at the Jump Simulation Center and have a surgeon run through the whole procedure in the simulated operating room. This is the way future surgeons will be trained,” added John Vozenilek, Chief Medical Officer for Jump.

The research that Kesavadas group is working on takes that a step further and wouldn’t even require a robot for learning the basics of robotic surgery. Instead, through virtual reality and computer simulation, surgeons will be able to replicate the surgery.

“The kind of impact we are thinking is when someone comes to become a robotic surgeon,” Kesavadas said. “The simulator teaches them fundamental skills required to use a surgical robot without even needing to train on an actual robot.

Kesavadas has been working on robotic simulation for about seven years and was the inventor of RoSS, the first stand-alone simulator for da Vinci surgical robot, currently used in training centers around the world.

“We use a mock interface to control a virtual robot,” Kesavadas said “The goal is so make a surgeon highly-skilled before they are allowed to touch a patient.”

There are two technologies that have made this type of simulation possible, according to Kesavadas. The first is virtual reality, which can simulate cutting a tissue, tying a knot and advanced engineering principles that are graphically stimulating. The second is haptics, which gives users the sensation of touching objects. For instance, a surgeon could feel tissue even though there is none.

“With computers and the new GPU based technologies, we are able to implement algorithms on a PC which would have required a supercomputer maybe 15-20 years ago,” Kesavadas said.

Urologists and gynecologists in residence are already using this robotic simulation for procedures like prostatectomies and hysterectomies using technology developed by Kesavadas.

Kesavadas is one of a half dozen Illinois faculty that is in the process of taking it to the next stage to introduce unexpected events. This spring an interdisciplinary group of Kesavadas, Professor Ravishankar Iyer from the Coordinated Science Laboratory on campus, Zbigniew Kalbarczyk, Research Professor at CSL, Rush University surgeon Jaishankar Raman, and doctoral researchers Homa Alemzadeh (electrical and computer engineering) and Xiao Li (mechanical science and engineering), published their first paper demonstrating simulation of adverse events by using both a robot and simulator.

The FDA requires robotic surgeons to report events that have caused surgeries to be halted or where the patient has died. Their group is using those events to build an adverse event simulator. In the next year or so, the goal is to take the simulator to Peoria, to test and get feedback from doctors.

“We are looking to simulate most common unexpected events and what caused them,” Iyer said. “For example, if one of the surgical tools breaks down, what do you do? Do you stop the surgery? Prior to now, surgeons were only exposed to these events inside the operating room.”

In addition to engineers, the new Carle Illinois College of Medicine will bring actual practitioners or doctors-in-residence to the center, which Kesavadas adds will be extremely beneficial to the development.

“The ability to have our own simulation center where we can test this with real students gives us everything,” Kesavadas said. “We don’t want to be just an engineering research center, but also want to translate research into clinical practices. The medical students can train here and give us feedback, which can improve our technology. When trainees come in, they can practice on both the robot and the virtual simulator.”

With simulation centers on campus, at Carle Foundation Hospital in Urbana (the university’s partner in the College of Medicine) and in Peoria, the University of Illinois is poised to be the epicenter of surgical simulation whether through research or practice.

“We are building a big effort to become national leaders in simulation,” Kesavadas said. “Even though others are training in robotic surgery itself, the simulation to train robotic surgery is something that we have a unique strength here. There really is no other center like this in the country. We will have access to everything a student or a fellow will be required to learn. With RAVEN and the new virtual simulator, it helps take our robotic surgery program to the next level.”

For more information on this story or for other College of Engineering media inquiries, contact Mike Koon, Marketing and Communications Coordinator, 217/244/1246