A renewable energy project led by Illinois researchers is one of 17 research proposals being funded by the National Science Foundation (NSF) in its latest round of innovative, international research projects to advance the frontiers of science and engineering and forge robust collaborations with scientific expertise around the world.

The new awards, totaling more than $69 million, are made through NSF’s Partnerships in International Research and Education (PIRE) program, which began in 2005. PIRE helps catalyze strong international engagement by the U.S. science and engineering community. Projects work to generate new knowledge and discoveries; promote a diverse, globally engaged U.S. workforce; and build the institutional capacity of U.S. institutions to engage in productive international collaborations. 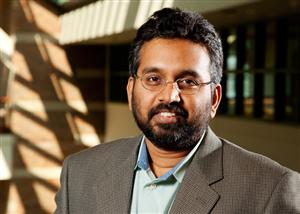 “This award combines our world-class experimental resources, computational facilities, and expertise to solve the energy storage grand challenge,” Aluru said. “The team will focus on solid oxide electrolysis cells that transform renewable energy into chemical energy and store it for later use. These cells are viewed as a clean, efficient path to a carbon-neutral economy. Our goal is to make this technology more efficient and reliable.” The program is a centered at the University of Illinois and Kyushu University in Japan. Collaborating institutions include Northwestern University and the University of California-Berkeley.

“The combination of the University of Illinois’ and NCSA’s expertise in state of the art computational sciences with the experimental leadership of Kyushu University in solid state ionics uniquely positions our team to make some impactful advances to solve this challenging problem,” stated MechSE assistant professor Elif Ertekin.

“By linking together researchers from around the world, PIRE allows us to leverage U.S. dollars and improve scientific outcomes,” said Rebecca Keiser, head of NSF’s Office of International Science and Engineering, which manages PIRE. “These rich partnerships will tackle some of today’s most pressing research questions, from predicting natural disasters to understanding intricacies of the human brain.”

“This is the first time that the University of Illinois has received funding through this program,” remarked Petros Sofronis, a MechSE professor and director of the International Institute for Carbon-Neutral Energy Research. “In addition to the research effort, there is a substantial education and outreach program through which undergraduate students can participate in summer research exchange programs between our U.S. institutions and Kyushu University. An important goal of PIRE, in addition to cutting edge research, is to prepare a globally engaged next generation workforce.”

Within NSF, PIRE is also supported by the Experimental Program to Stimulate Competitive Research (EPSCoR) and all programmatic directorates. NSF support – which funds the U.S. portion of the collaboration – is leveraged by partnerships with the U.S. Agency for International Development and by counterpart funding agencies in China, Finland, France, Germany, India, Japan, Mexico, Russia, Spain, South Korea and Taiwan.
____________________