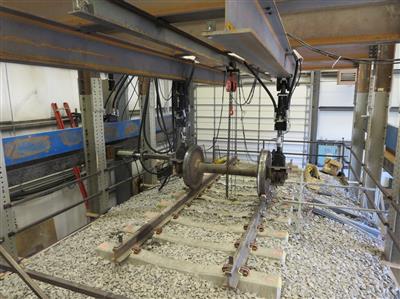 Illinois' new Research and Innovation Laboratory (RAIL) has garnered interest from industry leaders in both the public and private sectors.
The rail industry in North America continues to gain strides, particularly moving freight across the continent safely, efficiently and economically. Additionally, rail transit systems are undergoing substantial expansion. That makes the work at the recently developed Research and Innovation Laboratory (RAIL) located at the Harry Schnabel, Jr. Lab at the University of Illinois at Urbana-Champaign so critical.

Established through grants and support from USDOT's Office of the Assistant Secretary for Research and Technology, the Federal Railroad Administration, railroads, and rail industry suppliers, the 3,500-square foot laboratory in northwest Champaign, is unique among academic research facilities in the U.S.  It is gaining attention and support from both the public and private sector through its research toward making rail and transit lines safer, more resilient and cost-effective. RAIL, part of the University's Rail Transportation and Engineering Center (RailTEC), began its initial operations in 2014 and recently became fully functional. On Wednesday, August 19, dignitaries from government and industry will converge at RAIL to see first-hand the capabilities of the laboratory, as well as celebrate the grand opening of the facility.

Those in attendance will include Gregory Winfree, Assistant Secretary for Research and Technology for the United States Department of Transportation; Michael Franke, Senior Director of State Government Contracts for Amtrak and Joseph Leader, Senior Vice President for New York City Transit.

“This laboratory is an important new tool to develop a fundamental understanding of how track components and track systems respond to heavy axle loads, high-speed trains, and rail transit vehicles” said Christopher Barkan, who is a professor and George Krambles Faculty Fellow in the Department of Civil and Environmental Engineering, and Executive Director of RailTEC at Illinois. “Such understanding is critical to improved future designs.”

“We can experimentally control key variables that relate to how the track structure is loaded, and measure and quantify its response under various conditions,” added Riley Edwards, a senior lecturer and research scientist. “These specific laboratory capabilities did not previously exist in North America.”

The FRA’s initial investment increased RAIL’s capabilities leading to interest from the private sector to conduct research there as well (including Union Pacific, GIC, RAIL.ONE, and Vossloh Fastening Systems), which in turn made further investments in the lab and sponsored new research.

“RAIL is an example of cooperation between three government agencies within the Department of Transportation (the FRA, Federal Transit Administration and Office of the Assistant Secretary for Research and Technology)," Barkan noted. "It also represents cooperation with private sector companies, who are using the results to improve practices and component design. “Riley and his team have already had an impact developing new industry standards that have been adopted by the American Railway Engineering and Maintenance of Way Association, the North American standard setting organization for rail infrastructure.”

“Both the public and private sectors are interested in RAIL because of its role in improving safety and resiliency of rail infrastructure,” added Edwards. “Additionally, increasing the life cycle for the track system and its components improves the bottom line.”

“We’re adapting methodologies and procedures that we’ve developed through prior research in the railroad industry and applying them to solve rail transit problems,” said Edwards. “As is the case with the railroad research, the objective is to engineer transit infrastructure components so they better perform their intended function and at the same time reduce costs for these public agencies.”

Since RAIL first opened its doors, research funding at the lab and the number of organizations sponsoring projects has doubled, thanks in large part to support from the private sector. While RailTEC has just begun publishing findings developed at the new lab, the knowledge gained there promises to influence rail-engineering practice well into the 21st century.

“Thanks to the research conducted at RAIL, we will see better designed track and components,” concluded Barkan. “It will be engineered to withstand the increased demands on the track system from higher speeds and heavier axle loads. If you’re a passenger, it will mean you’re riding on safer and more reliable infrastructure, that is less likely to have outages that delay service.”
________________

For more information on this story or for other College of Enginering media inquiries, contact Mike Koon, marketing and communications coordinator, 217/244-1256