Recently, quantum dots (QDs)—nano-sized semiconductor particles that produce bright, sharp, color light—have moved from the research lab into commercial products like high-end TVs, e-readers, laptops, and even some LED lighting. However, QDs are expensive to make so there’s a push to improve their performance and efficiency, while lowering their fabrication costs. 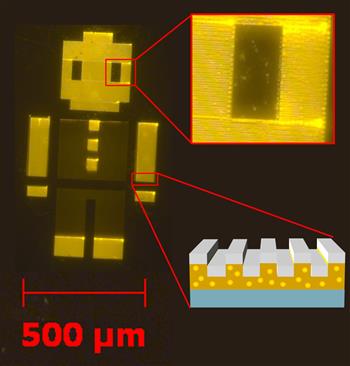 To demonstrate their new technology, researchers fabricated a novel 1mm device (aka Robot Man) made of yellow photonic-crystal-enhanced QDs. Every region of the device has thousands of quantum dots, each measuring about six nanometers.
A team of researchers from the University of Illinois at Urbana-Champaign has recently produced some promising results toward that goal, developing a new method to extract more efficient and polarized light from quantum dots (QDs) over a large-scale area. Their method, which combines QD and photonic crystal technology, could lead to brighter and more efficient mobile phone, tablet, and computer displays, as well as enhanced LED lighting.

These photonic crystals limit the direction that the QD-generated light is emitted, meaning they produce polarized light, which is more intense than normal QD light output.

According to Gloria See, an ECE graduate student and the lead author of the research reported this week in Applied Physics Letters, their replica molded photonic crystals could someday lead to brighter, less expensive, and more efficient displays.  “Since screens consume large amounts of energy in devices like laptops, phones, and tablets, our approach could have a huge impact on energy consumption and battery life,” she noted.

“If you start with polarized light, then you double your optical efficiency,” See explained. “If you put the photonic-crystal-enhanced quantum dot into a device like a phone or computer, then the battery will last much longer because the display would only draw half as much power as conventional displays.”

To demonstrate the technology, See fabricated a novel 1mm device (aka Robot Man) made of yellow photonic-crystal-enhanced QDs. The device is made of thousands of quantum dots, each measuring about six nanometers.

“We made a tiny device, but the process can easily be scaled up to large flexible plastic sheets,” See said. “We make one expensive ‘master’ molding template that must be designed very precisely, but we can use the template to produce thousands of replicas very quickly and cheaply.”