Researchers at the University of Illinois at Urbana-Champaign have uncovered physical mechanisms allowing the manipulation of magnetic information with heat. These new phenomena rely on the transport of thermal energy, in contrast to the conventional application of magnetic fields, providing a new, and highly desirable way to manipulate magnetization at the nanoscale. 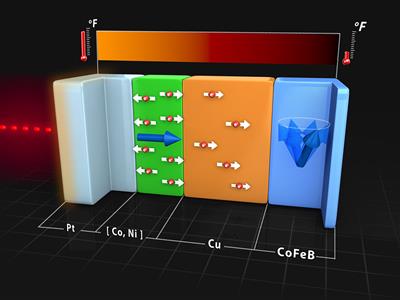 Schematic, cutaway view of the geometry used to generate currents of spin from currents of heat. Pulses of laser light heat the left side of the sample and create an intense current of heat passing through the [Co,Ni] ferromagnet. This current of heat creates a separation of electron spins that then diffuse through the Cu heat sink and affect the magnetization of a second ferromagnetic layer, CoFeB, causing the magnetization to tilt and then precess. The total thickness of the sample is approximately 100 nm.
“In our study, we make use of the fact that a heat current passing through a magnetic material creates a separation of electron spins. This process creates a current of magnetic dipoles that we use to manipulate the orientation of a second magnetic layer,” said David Cahill, a Donald B. Willett Professor of Engineering and head of the Department of Materials Science and Engineering at Illinois. “The physics of separating spins with heat currents is related to the operation of thermocouples and the thermoelectric generators that power deep space probes. In those thermoelectric devices, a heat current causes a separation of electrical charges. That separation of electrical charge can then be used to measure a temperature or provide electrical power.”

“We quantify thermal spin transfer torque in metallic spin valve structures using an intense and ultrafast heat current created by picosecond—one trillionth of a second—pulses of laser light,” Cahill added. “This heat current has the impressively large magnitude of 100 GW per square meter and persists for approximately 50 trillionths of a second. The sign and magnitude of the heat-driven spin current can be controlled by the composition of a ferromagnetic layer and thickness of a heat sink layer.”

Cahill’s research group at Illinois studies the physical mechanisms governing the interplay of spin and heat at the nanoscale, addressing the fundamental limits of ultrafast spintronic devices for data storage and information processing. In addition to Choi and Cahill--whose work was supported by the Army Research Office MURI program--co-authors of the paper include Byoung-Chul Min, Center for Spintronics Research, Korea Institute of Science and Technology, Seoul; and Kyung-Jin Lee, Department of Materials Science and Engineering and KU-KIST Graduate School of Converging Science and Technology, Korea University, Seoul.
_______________________